The trends have been widely reported in health care for years: a rapidly aging population, combined with advances in technology and treatment that prolong life through serious, chronic medical conditions. What that means for emergency rooms across America is simple: they’re seeing more acute patients than ever before.

We get sicker patients coming in, and we have to take care of them.”

Unfortunately, that fact has run headlong into another trend — that of patients, particularly the uninsured, using emergency rooms for routine health care. That, and the gradual closing of many hospitals over the past two decades, have left emergency departments across Massachusetts overcrowded, and their patients waiting longer than ever to be seen.

“There’s an issue nationwide right now with the overcrowding of emergency departments, and locally we definitely have the same problem,” Kenton said. “All the hospitals are running into this.”

Recognizing that the problem is largely tied to people using ERs for non-emergency health care, the state has taken a proactive approach, budgeting $4 million this year to community health centers in an effort to steer patients with routine problems away from emergency rooms.

The money will be spread out among 21 health centers in 12 communities, allowing them to expand staffing and capacity during regular hours, stay open on additional nights and weekends, and — perhaps most important — pay for education campaigns that encourage patients to choose community health centers over ERs for minor conditions such as flu, fever, sprains, rashes, cuts, and minor broken bones.

This month, The Healthcare News discusses the ER crowding issues with several emergency physicians to get a measure of the problem — and how hospitals are taking steps to make sure patients are treated in a timely manner. The methods might vary, but they all agree on one thing: it’s not an easy task.

The demographic trends couldn’t be clearer or more concerning, said Hank Porten, president and CEO of Holyoke Medical Center. With Baby Boomers entering their senior years, “people will be coming into the emergency department sicker, and with more complex diseases and multiple diseases,” he explained.

We have an emergency department that’s 45 or 50 years old, and was designed for a totally different time in health care.

“We’ve seen situations where a patient with heart disease is behind a curtain from a patient with significant behavioral health issues,” he continued. “And families want to be close to their loved ones during the treatment process” but find it difficult given the space constraints that exist today.

Such situations are made even worse by the fact that hospitals have seen increasing use of ERs by patients who have no emergency, but simply want free primary care or access to lab services.

Dr. John Santoro, who chairs the Department of Emergency Medicine at Baystate Medical Center in Springfield, said his facility is even more prone to this trend because of its expertise in certain areas of specialty care. Indeed, Baystate has established itself not only as a level 1 trauma center, but a preferred destination for major pediatric cases, cardiac stent cases, and stroke patients, never diverting such cases while accepting diversions from other hospitals — and that can mean long waits for non-critical patients. “We feel the pressure even more because of certain commitments we’ve made to the community,” he said.

“A very high number of our population is uninsured, so they end up using the emergency department as their primary care facility,” he said. “That in turn increases the wait time of other patients.”

Kenton noted, however, that the problem isn’t the ER’s alone; hospitals, he said, need to take a systemic approach to the issue of emergency department overcrowding.

“Many times there’s a lack of inpatient beds,” he said, which can cause a backup when trying to transfer patients out of the emergency area. In addition, “there’s a shortage of nurses nationwide, and it doesn’t matter how many beds you have if the nurses aren’t there to take care of the patients.”

“Many long waits in the ER are caused by the boarding situation of seriously ill patients in our ERs when hospitals do not have enough beds for those who need to be admitted,” said Dr. John Benanti, president of the Mass. College of Emergency Physicians.

“There are always competing demands, and not only in the emergency department,” Santoro said. “If I don’t have an inpatient bed available, I can’t get someone out of the surgery rooms. So there has to be a balance. If we create a gigantic emergency department but have no place to admit the patients afterward, we would eventually be filled up.”

“The average patient going to an ER today has a waiting time of nearly four hours due to the need to treat the most serious cases first,” he said.

Further, Benanti claims, the ability of most hospitals to handle large-scale emergencies — what is known as ‘surge capacity’ — is virtually nonexistent at many hospitals, a major concern at a time when the health community is pondering the potential for pandemic flu, bioterrorism, weather-related disasters, and other events.

A shortage of specialists on call in various fields, from radiology to gastroenterology, also slows down the efficiency of an ER, Kenton said. But he added that Mercy has reduced some of the traffic with a fast-track system that assesses the needs of non-critical patients more quickly by ordering X-rays, blood work, and other needed tests right from triage, so that results are available by the time a doctor sees the patient.

“That really speeds up the process and gets patients through the system quickly. It helps that, by the time the provider walks into the room, we have a lot of information back already,” he said.

“Our goal here at Mercy is to get patients in and out of the main emergency department in a three-hour period, and fast track in one hour,” he added. “We’re constantly looking at how we can get to that point.”

The fast-track concept was also launched in March at Cooley Dickinson Hospital in Northampton, in an ER designed to accommodate 30,000 annual visitors but treated 34,400 last year; the hospital expects that number to further increase this year.

The fast-track unit has five single patient rooms and a nurses’ station located nearby. The triage area has also been expanded, with a reception area staffed by an ED technician or volunteer greeter, allowing the triage nurse to always be present at the front window.

CDH has also added computers on rolling carts, which allow for bedside registration so patients can be escorted to a bed as soon as one is available, and portable telephones that allow the triage nurse to communicate with ED clinical staff.

No easy answers exist to solve the overcrowding problem in most ERs, Benanti said, but he agrees with efforts to improve triage systems, more effectively coordinate care with specialists and colleagues in primary care, and expand capacity as resources permit.

Holyoke Medical Center is among the Western Mass. hospitals looking to do the latter, interviewing architects, collecting input from medical staff, and otherwise taking the first steps toward creating a concrete plan for expanding and improving its emergency facilities.

“We’re putting a lot effort into this, touring other facilities and interviewing experts about where health care is going to be in 10 to 15 years,” Porten told The Healthcare News. “We’re not doing this in a vacuum by ourselves; we’re seeking out the best minds we can contact on this issue.”

Blast from the Past

Part of the problem, Porten said, is that many emergency rooms weren’t designed to accommodate the range of equipment needed by today’s patients. “You have technological changes today that weren’t even imagined when this ED was developed — and that takes space,” he continued, noting that the hospital struggles to accommodate state-of-the-art equipment that’s consuming more and more space.

“From that perspective, we have to make some changes, remodel, and expand,” he said. “And that means we have to look at what our future needs will be, because technology continues to change, and people are coming to hospitals with more significant illnesses. We have to take care of very ill patients, and we have to coordinate our relationships with the rest of the hospital in order to accomplish this.”

Porten said Holyoke is fortunate that its emergency department is located in the same area and on the same floor as its intensive care unit and radiology department, providing efficient flow between those units. “We don’t want to lose that as we expand.”

Baystate, too, is peering into the crystal ball, trying to project what the needs of the 21st-century hospital will be as it launches a $259 million expansion. It’s an exercise Santoro has been doing a lot of, coming up with inklings of what the next generation of emergency departments will be like.

He predicts that ER beds themselves will feature more high-tech monitoring equipment in the future, and tasks like triage and registration will be performed at the bedside to streamline the process. “Emergency departments are going to be self-contained, so we’ll probably have the ability to do CT scans within the unit rather than outside it,” he said.

“All of this is pretty exciting, but it will also be a lot of work,” Santoro added. But if emergency doctors end up working around less traffic, all the planning will have been for the better.

That is, until hospitals have to start looking toward the 22nd century. 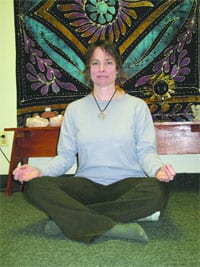 Just Breathe Yoga Goes Mainstream with People of All Ages