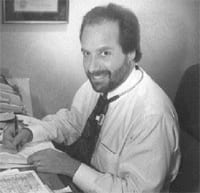 Gary Reiter traveled across the country and around the globe in his efforts to spread knowledge about HIV, AIDS, and, later in his career, end-of-life care. But it was his work in his own backyard — Holyoke — that most inspired Dr. Garry Bombardier.
“He took away the fear that people had about AIDS here … he turned individuals with AIDS into people who were merely sick,” Bombardier, medical director of the Work Connection at Holyoke Hospital, said of his colleague, Dr. Gary Reiter, 48, who died last month. “Gary was a candle in the dark.”

Similar words were used by other colleagues and administrators at the hospital to describe Reiter, who was called an innovator when it came to the treatment of AIDS, but also a man of great energy and compassion who devoted his life to caring for segments of society that often fell through the cracks in the health care system and society in general.

Reiter, who was remembered at a series of memorial services in the week after his death on July 12, was described by friends and colleagues as a tireless advocate for his patients, an effective teacher, forward-thinking administrator, and devoted father.

“He was quite a unique individual,” said Holyoke Hospital President Hank Porten. “He was a very bright, energetic individual who had a lot of compassion for his patients.”

Reiter, who came to Holyoke in 1988 and established a practice in Internal Medicine, became Holyoke Hospital’s medical director in 2001. He helped establish the HIV clinic at River Valley Counseling Center in Holyoke, worked with Holyoke Health Center’s HIV programs, and, later in his career, became involved in end-of-life care, medical ethics, and palliative care. “He also wrote extensively and was on the lecture circuit, talking about AIDS, ethics, spirituality, and other subjects,” said internist Robert M. Fishman, a friend and colleague. “That’s as much as three physicians could accomplish.”

Indeed, Reiter’s passing leaves many wondering how, and by whom, the huge void he left will be filled.

“It’s logical to say that anyone can be replaced,” said Bombardier, who preceded Reiter as Holyoke Hospital’s medical director. “We’ll have a very hard time filling this void … there’s no one I know who can take up the challenge.”

While Reiter had a very successful private practice and was considered very progressive as the hospital’s first full-time medical director, he will perhaps best be remembered for his work with AIDS and HIV.

Both Reiter and Fishman were residents at Presbyterian Hospital of the Pacific Medical Center in San Francisco in the early ‘80s. There, they saw firsthand the ravages of the disease later to be named AIDS.

“It was like living in the textbook of medicine,” Reiter told The Healthcare News in an interview in late 2000. “It was awful. People were dying, and there wasn’t anything we could do. We were watching this thing develop and trying to figure it out at the same time.”

Not long after arriving at Holyoke in 1988, Reiter took what he learned in San Francisco and helped establish the first comprehensive AIDS clinic in Western Mass. And while he was delivering cutting-edge treatment to those with HIV, Bombardier said he will most remember how Reiter worked to humanize AIDS and quell the fears many had of treating those with the disease.

“He was one of those people who made a person with AIDS back into a sick person, not someone to be feared,” he explained. “And that was a giant step, not only here but across the country, and he was one of the individuals that helped the medical community cross that bridge.”

Bombardier said Reiter’s work, coupled with advances in the treatment of those with HIV, have greatly reduced the pain and suffering for those individuals with the disease.

“The doctors at the Holyoke Health Center are now very well-versed in treating HIV,” he said. “It’s been quite a few years now since we’ve seen the terrible disease that we had seen 10 years ago, and I’m positive that it’s because of Gary and all the work he’d done. There’s no doubt in my mind that it’s because of the dedication and the programs he put in place.”

From his work with AIDS and HIV, Reiter developed a strong interest in both palliative care and end-of-life, or hospice, care, said Fishman, who told The Healthcare News that Reiter lectured often on those subjects in recent years.

Somehow, he managed to find time for all those pursuits, as well as a variety of interests that included music — specifically, the guitar — and also running (he ran in several marathons), travel, and the arts.

As a hospital administrator, Reiter was very innovative, said Fishman, noting that he was instrumental in bringing nurse midwives to the hospital and had developed an ethics committee at the facility, among many other initiatives. He was also in the process of getting a hospitalist program off the ground.

“He had a great deal of vision,” said Porten. “He was constantly looking for ways to improve the quality of care we provided; patients always came first to him.”

In his search for words to describe Reiter and his work, Fishman came back to the term passionate early and often.

“He was passionate about his practice, his patience, and especially his family,” said Fishman. “Everyone counts themselves lucky not only for being able to work with him, but for being his friend. He will be missed.

As Bombardier said, he was a candle in the dark.

Is Someone Bleeding Your Practice?