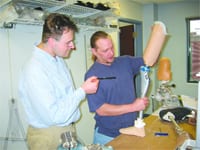 Jim Haas has something neither Blaine Drysdale nor Brian Miller has: two complete legs.

However, Drysdale and Miller have something that Haas, a certified orthotist who manages Orthotics and Prosthetics Laboratories in Springfield, lacks: the ability to relate to amputee patients through shared experience.

That’s why having Drysdale, a certified prosthetist; and Miller, a prosthetic technician, on staff has been powerfully eye-opening for Haas.

“People relate to them differently,” Haas said. “People will ask them questions they would never ask me, and when the answers start flowing, it opens doors.
“They provide a piece of the puzzle to help amputees recover,” he continued. “We’re very fortunate to have these guys. They fill a void I can’t fill.”

It helps that Drysdale and Miller are accomplished — both physically and in their careers — and that they share a quick, often irreverent sense of humor about their experiences. In short, by refusing to see themselves as handicapped, they provide a living example to patients whose lives have been turned upside down by disease or injury.

This month, The Healthcare News takes a look inside Orthotics and Prosthetics Laboratories, and how some of its key players combine cutting-edge technology with piercing insights to improve the lives of patients — or, rather, give them the tools to improve their lives on their own.

Drysdale was planning on attending art school when he lost his leg below the knee following a motorcycle accident 16 years ago. “That changed my career path,” he said. “I went into physical therapy and did that for a number of years.”

Soon, however, he became intrigued with prosthetics and went to school for training. “I did my residency here and never left,” he said. Drysdale does fittings and performs modifications to the prostheses made for patients.

Miller had his plans dramatically changed by an accident as well — in his case, being hit by a freight train in Springfield 18 years ago, which resulted in an above-the-knee amputation. Shriners Hospital took him in even though, at age 17, he was slightly over the usual age limit. That’s where he met Haas, who eventually shepherded him into training in orthotics — and a spot in the Springfield practice, where he actually constructs patients’ prostheses.

The varying nature of their amputations — above-knee and below-knee patients face whole different sets of obstacles — allows Drysdale and Miller to test-drive a wide range of new technology, as it were.

“Brian gets to try out knees, and I get to try out ankles and feet,” Drysdale said. And the equipment they’re trying out — Miller sported an experimental bionic knee the day he spoke with The Healthcare News — amazes even them, considering what they started with.

“See the hinge on the door?” Miller asked. “That was like my first knee — and it was made out of wood and weighed 35 pounds. This one weighs eight.”

Drysdale explained that many of the materials being used in artificial limbs and joints these days are not uncommon to aerospace technologists — or Ferrari frames, for that matter.

“Its some very high-tech stuff that’s also very lightweight,” Miller said. “We want it to be as light as possible.”

Haas explained that even artificial feet have come a long way; in the past, feet were typically shaped blocks of wood that struck the ground the same way every time — whether the wearer was walking on a level surface, moving quickly downhill, or climbing stairs. Today, cutting-edge artificial feet boast shock-absorption qualities, and, paired with bionic knees or ankles, make movement feel more natural.

“These knees know where you are in space, and they can predict how your foot is going to hit the ground, and they make adjustments,” he said. “That makes walking around more fluid. It knows when you’re going upstairs, and it can give more or less resistance. It knows the speed you’re walking. Instead of a knee that bends the same every time, this knee changes based on what you’re doing.”

“With all my other legs before, it was like a hockey stick,” Miller said. “I’d have to drag my fake leg up stairs. Now I can go foot over foot and not fall on my face, which is good.”

It all comes together in a package designed for comfort, Haas added. Previous generations of wood-and-leather artificial limbs compelled wearers to jam something soft — perhaps a wool sock — between the limb and their own skin. Now, soft but durable gel liners do that job.

Any advance in comfort helps new amputees adjust to life with an artificial limb, said Drysdale, who noted that learning the subtleties of balance is a major hurdle. “Eventually, you develop an awareness of where your foot is.”

Where the Foot Isn’t

Miller is quick to note that it wasn’t just an interest in the field that led him down his current career path. Job discrimination, he said, played a major role.

“I know that people are blind to it, but it’s out there. I can’t even explain how big it is,” he told The Healthcare News, saying employers have found many reasons over the years to favor another job applicant. “I have a black belt in the martial arts. I’ve been mountain climbing. There’s not a thing that guy can do that I can’t do.”

Miller is particularly outspoken about what he sees as a stigma toward amputees. “Society shuns people who are different,” he said. “The attitude is, ‘he’s different, he’s missing something, so he’s not whole.’ But I personally don’t look at myself as being handicapped or disabled. I’m not.”

He noted that children are more likely to approach someone who’s missing part of his leg, because they haven’t learned not to accept him. When their parents discourage such openness and shoo them away from Miller like there’s something wrong with him, he said, they unwittingly plant seeds of the stigma in their kids.

“People have become much too politically correct, trying to keep their kids quiet,” he said. “But if they don’t ask questions, they won’t understand. Their parents think they’ll hurt my feelings, but questions never hurt anyone.”

In fact, Miller might break the ice with the younger set by flashing some of the humor he and Drysdale trade easily with each other. “If they ask, ‘are you like the Terminator?’ I say, ‘no, he’s my uncle.’”

Haas said it’s even more important that new amputees understand as early as possible that they can face their struggle with hard work and a positive outlook, and that life goes on — often impressively so. In fact, the Extremity Games held annually in Florida feature skateboarding, surfing, rock climbing, BMX, and martial arts, all for a roster of anything-but-handicapped competitors who have lost limbs.

On a local level, Drysdale and Miller provide similar inspirations to patients at the Springfield practice.

“These guys have added an extension of the business that’s very gratifying to me,” Haas said. “It helps tremendously that an amputee has someone to relate to on a level that I can’t relate.”

“Some of the people want somebody to talk to who went through it,” Miller agreed. “They want to sit down with someone who knows what they’re feeling.”

Haas said everyone at the practice makes it clear — both in what they say and how they live — that they don’t think of amputees as being handicapped. “People come here and see Blaine and Brian and say, ‘maybe it’s not so bad,’” he said.

Still, it sometimes takes some convincing for patients who suddenly face the biggest challenge of their lives. For instance, he told of one woman he met at his Pittsfield clinic who asked about wheelchairs and installing ramps after her teenage son had his leg amputated below the knee.

“We look at that as no big deal,” Haas said. “We knew the kid’s potential. We told her, ‘his life is not over, and he’s going to be a productive member of society. So save that ramp money and throw a party.’”

To that, Drysdale flashed a knowing grin. “And invite us,” he said.

Is Someone Bleeding Your Practice? Some Practical Steps To Reduce Employee Embezzlement Losses — Part 1 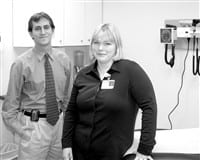