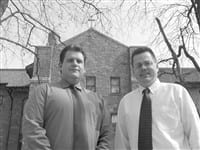 For more than 70 years, the Our Lady of Sorrows monastery stood as a historical landmark for West Springfield and the Pioneer Valley. Today, it remains a landmark of a different — and much-needed — kind.
Next month, Landmark Senior Living Community at Monastery Heights will mark its first anniversary as an assisted living facility on the grounds of the former monastery, which closed its doors in 1996. To its owners, Connecticut-based Simsbury Associates, the 105-unit center is yet another example of a development that bridges the gap between maintaining history and meeting a current and future need.

The May 2001 opening of the center, nestled on 18 wooded acres on Monastery Avenue, near Riverdale Road, marked the fourth historical property that Simsbury Associates has renovated using historical tax credits from the federal government, following projects in Beverly, Fall River, and Boston.

“This way, we get to preserve a landmark,” sales and marketing director William Gaw said, noting that all four developments bear that name. We’re able to do something that keeps the past alive and respects the old architecture.”

And in doing so, he believes that the spirit of the monastery, and its historical importance to the region, remains intact, even as the building serves a very different purpose.

Built in 1923, Our Lady of Sorrows Monastery served the Passionist order of Roman Catholic brothers for 73 years at its West Springfield grounds. But those men weren’t its only occupants. Over the years, the monastery became known as a popular destination for Catholic youth retreats. In fact, Landmark’s executive director, Gary Grumoli, said he occasionally gets visits from adults who want to tour the brothers’ former quarters because that was the only area of the building they were not allowed to enter when visiting as teenagers.

With so many memories associated with the building, when it closed six years ago, neighborhood groups felt it was important to somehow preserve its history. They found a match in Simsbury Associates, which earns project funding from the National Park Service by adhering to rigid guidelines for renovating historical properties. “We wanted to make sure this was something that would be good for West Springfield and good for the entire area,” Grumoli said.

To accomplish that goal, the developer had to perform significant renovations to the tune of $10 million, but every proposed change was first run by park service officials, right down to the style of doors and windowsills — a necessary step to qualify for funding.

And aside from brightening the formerly dim corridors and rooms with lighter-colored paint, the monastery’s historic features — now restored — indeed stand out, from the stained-glass windows and religious statuary to the painted wooden beams high above a chapel where Passionist brothers once lined the aisles to chant.
“We said we weren’t building anything on this land,” Gaw said — that is, except for a community of senior citizens.

Today, the 70 traditional assisted living apartments — a mix of studio, one-bedroom, and two-bedroom units — are near capacity, and the 35-unit Morningstar wing, which houses memory-impaired residents, is filling up as well. Some residents receive subsidies from the state’s Group Adult Foster Care Program, but for most, per-month rates range from $1,900 to $3,800 depending on the size of the room and the level of services the resident needs.

“Everyone has a different acuity level,” Grumoli said. “Some might need more services than others. So we craft a plan based on the needs of individual residents.”
All residents have access to activities, weekly housekeeping and linen service, activities, wellness seminars, an exercise program, transportation to appointments and shopping outings, and three meals daily, served restaurant-style and cooked up by a former chef at Eastside Grill in Northampton.

Three other plans, dubbed ‘enhanced,’ ‘enhanced plus,’ and ‘extended care,’ add services as needed, such as medication management, escorts to meals, additional safety checks, and assistance with activities such as bathing, dressing, and grooming.

Residents at Monastery Heights receive regular visits from a physical therapist, a podiatrist, a hairdresser, and local musicians and entertainers. But they also might run into a meeting of some West Springfield organization that needs a place to congregate. In fact, Gaw said, allowing groups to use the common area benefits the center as much as it does the visitors because it allows neighbors to better understand the facility’s role.

“The greatest challenge is to educate the community on what assisted living really is and isn’t,” he said. “It’s not a nursing home. It’s actually closer to a college dorm. Great friendships are made here. It’s a strong community where people know each other and support each other.”

He characterized assisted living as a bridge between independent living and the skilled care of a nursing home. Residents in an assisted living facility such as Landmark enjoy the independence of a retirement community but have access to a host of services to aid in daily living, such as 24-hour coverage by CNAs and an LPN available up to 10 hours per day for oversight, assessment, and as a resource.

As for the housing itself, Gaw said, the rooms may be small, “but we don’t want people in their rooms. We want them out, enjoying socializing.”

Residents in the Morningstar units have their own regimen of structured activities from 8:30 a.m. to 8 p.m. daily, although they may mingle at events in the center’s common areas as they are able. Lois Goralski, the wing’s program director, said the key is knowing what kinds of mental and physical stimulation residents with dementia need, while at the same time avoiding over-stimulation.

“We’re different, for a community that provides ongoing dementia care, in that we blend the two populations where it’s appropriate,” she said, adding that another priority is to keep families involved as much as possible with planning medication and coordinating other care.

On the day she spoke with The Healthcare News, one of the warmest days of the year to that point, Goralski was preparing to take a group of Morningstar residents to the courtyard to rake debris. The familiarity of such a work routine — just like cleaning the kitchen after meals, as other residents do — is a beneficial experience, she said.

“It makes them feel valued,” she said. “One of the primary needs in life is to give and receive care.” One of her warmest experiences in the unit was seeing a resident skillfully carve the Thanksgiving turkey before a dinner prepared with help from residents, who also decorated the table.

If being valued is indeed a basic human need, another need, at least for most people, is a sense of God and spirituality, and that element is never far away at Monastery Heights. Original pews used by the brothers still line corridors and common areas, while religious icons of glass and stone peer over the proceedings.

The chapel’s ornate altar hosts a Catholic Mass every Tuesday and Communion on Thursday, while residents may also attend an Episcopalian service or a non-denominational ceremony on Sunday. “It’s important to have a chapel,” Gaw said. “People gravitate toward a chapel, regardless of their denomination.”

Those who stay at the old monastery have that and much more, including walking trails, a spa, and 24-hour aid available at the touch of a small pendant hanging from their necks. But even a facility located in such a pleasant locale must constantly be vigilant to keep a staff in place, considering the shortage of health care workers in many fields across the Commonwealth.

“To be successful, you have to open your doors to as many people as possible, and everyone’s needs are different,” Gaw said. “Just staffing is a challenge. You need dedicated people.”

So far, Monastery Heights, with its staff of 50 people working in administration, wellness, marketing, and food services — including some 25 certified nursing assistants — has managed to maintain a ratio of 12 residents per direct care worker in the main building and a ratio of five to one in Morningstar. CNAs who work with the memory-impaired residents must undergo additional training to deal with their unique safety issues and other needs.

“This is a place where people can age in place until they require more skilled care,” Gaw said. Those times when residents do leave, Grumoli added, are melancholy days in this college dorm for senior citizens.

And every resident who arrives or departs adds just a little bit more to the meticulously preserved history of Our Lady of Sorrows, a place where ex-teenagers still knock at the front door, anxious to see the brothers’ old hallways o