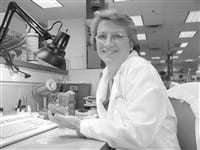 It’s hardly news that winter is flu season. But if it also becomes open season for bioterrorism, will doctors in private practice be able to spot the difference between influenza and anthrax?
As medical professionals at a recent bioterrorism symposium learned, dealing with such threats doesn’t end with discovering and treating individual cases. Any strategy must involve being educated in the characteristics of anthrax and other agents of bioterrorism, recognizing infection patterns over a wide area, and keeping the lines of communication open between hospitals, doctor’s offices, and public health and law enforcement agencies.

“If people were targeted at a public gathering and then went back to their individual towns, a child might go to a school nurse’s office, and someone else would show up at Baystate Medical Center. They would trickle in at different times and places,” said Dr. Carol Rauch, one of the symposium speakers and chief of the Division of Clinical Pathology at Baystate. Such scattered reports, she said, can make it difficult to recognize a growing threat.

At the Dec. 12 forum, titled “Bioterrorism in the Office: What Every Physician Should Know,” speakers stressed to medical professionals the importance of vigilance and better communication during these times — not paranoia, to be sure, but a dose of healthy caution grounded in education.

Physicians, without the proper education in what to look for, might be inclined to treat a bioterrorism infection as simple influenza. That’s what happened to one Washington, D.C. postal worker already, shortly before he died of inhalation anthrax, said Dr. Jeffrey Arnold, an attending emergency physician at Baystate and another symposium speaker.

“At this point, doctors have to have a higher index of suspicion regarding bioterrorism,” Arnold said. “They have to consider that a biological warfare agent might have caused a disease, and they need to know how to treat it. It’s not necessary to memorize long lists of things, but they should at least be able to access the information.”

Rauch noted that organizations such as the Centers for Disease Control and the Mass. Department of Public Health have Web sites and telephone numbers offering physicians advice on how suspicious they should be about certain patients and what tests to perform.

“By encouraging people to know what to look for and what to report, we can help make patterns out of an event and detect when something has happened,” she said. “That’s the key to minimizing the consequences.”

When encountering a cluster of people with fever and respiratory symptoms, for instance, she said, physicians need to know how to distinguish an influenza-like illness from the variety of terror agents officials are starting to become aware of.

The symposium, co-sponsored by Baystate and the Hampden District Medical Society, met a very real need, said Arnold, because primary care physicians often get left out of the loop when it comes to medical trends such as increased vigilance against anthrax and other bioterrorism agents. No one wants to see a rash of flu diagnoses that turn out to be something far more serious because of a simple lack of education, he stressed.

“It’s not realistic to give them all the facts there are at this point in time, but it is realistic to point them in the right direction so they know where to turn for the latest information,” Rauch added. “This is a moving target, and often recommendations of how to treat anthrax exposure are subject to change.”

Rauch said education efforts have been successful in hospital settings, but she agreed with Arnold that community physicians have been in some ways left behind. That’s unfortunate, she said, because they, not doctors in hospitals, are the ones who initially might be on the front lines if a terror event were to unfold.

Meanwhile, education on bioterrorism should go beyond doctors and extend to other medical professionals as well, she added.

“My personal point of view is that anybody affiliated with health care — which would include emergency workers, people who draw blood, anybody who interacts with a patient — has to have at least a little bit of knowledge in order to do things like prioritizing one phone call over another one,” she said.

“Even people who are support staff — infectious disease clinicians, people obtaining a specimen — now might be asked questions by patients. They’re representing the health care profession to a concerned person who might have read something in the newspaper or seen something on TV and who’s just looking for anyone to answer some questions. So the more people we educate, the better.”

Meanwhile, she added, efforts are being made to bolster continuing medical education on the subject. Such efforts include lectures on bioterrorism and adjustments in medical school curricula to recognize the growing importance of the topic.

Still, even as physicians and organizations scramble to make education a priority during these shifting times, Arnold said it is important to avoid panic and instead encourage common-sense adjustments.

He said he has begun asking patients what their occupations are to match up symptoms with possible demographic risk factors — postal work, for example. “Or, if I had a patient who had visited one of the media buildings in New York and ended up with some weird symptoms for a few days, I may want to do further investigation and make sure it’s the flu.”

Physicians must now consider a bigger picture, he said, adding that this is not yet second nature because Western Mass. has not been a specific target in the current spate of bioterrorism.

“I’m not necessarily going too far in testing people, but I’m being sensitive,” he said. “On the one hand, you don’t want to create paranoia for them, but on the other hand, you have to keep these things in the back of your mind.”

Planting seeds in the minds of medical professionals throughout the area, he added, is clearly a step in the right direction. 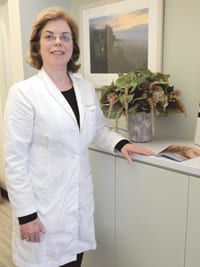