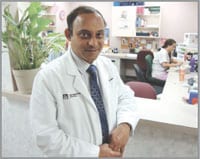 Essentially, gout is a recurrent medical condition that affects joints with a form of acute inflammatory arthritis. Uric acid builds up in the bloodstream, forming crystalline structures in joints and sometimes tendons and the surrounding tissues. While a family history of gout and some pre-existing medical conditions can predispose one to the painful symptoms, it is, as Dr. Dominic DeMello told the Healthcare News, “a very manageable condition.”

DeMello specializes in Rheumatology at Springfield Medical Associates. Elaborating upon the manageable nature of gout, he spoke the words that many are loath to hear: that lifestyle choices do play an important part in the appearance and recurrence of the condition. Historically, due to the factors of diet and lack of exercise contributing to gout outbreaks, it has been known as the “rich man’s disease.”

Obesity, protein-rich foods, and alcohol (primarily beer) all contribute to an increase of purines and the resultant uric acid. While managing one’s intake of certain foods — and maintaining a healthy exercise regimen — can help in offsetting the occurrence of gout, there are still individuals who will inevitably face the pain of inflamed joints.

Dr. Munir Ahmad, a specialist in Rheumatology and Internal Medicine at Holyoke Medical Center, told HCN that gout has increased in prevalence over the last few decades. He attributes that phenomenon to lifestyles people might not wish to amend, but adding that such a simplified and reductive diagnosis isn’t accurate.

“The increase in uric acid can, in fact, be a result of obesity and alcohol,” he began, “but one needs to consider kidney damage, as well as hyperthyroidism and hypertension.”

Identification of the condition is a relatively simple procedure of aspirating the joint to determine the presence of crystals. It is of utmost importance to conduct this test upon first presentation of the symptoms, however, to rule out far more dangerous and destructive conditions that could mimic the onset of gout.

When one is diagnosed with the condition, a doctor can prescribe a number of medications, depending on the patient’s medical history, to both alleviate the pain and address the overarching cause: levels of uric acid contributing to flareups. However, a patient can indeed control their own destiny with daily dietary choices.

This month, both Ahmad and MeMello elaborate upon the causes, symptoms, and treatment of gout. While the occurrence of the inflammatory arthritis might seem to be debilitating in the acute pain one feels, the condition can be controlled by both modern medicine and the patients themselves.

A Flare for the Dramatic

“Normally, uric acid begins building up throughout our lives, and in the 40s and 50s for men, it reaches a critical mass,” DeMello said. “If you are prone to getting gout, that’s when it will hit.”

For women, who are less susceptible, the critical period of common occurrence is just past menopause, he added.

Munir agreed, adding that, if gout does present itself in individuals prior to this timeframe, other underlying factors need to be considered.

“If you see someone with gout in their 20s and 30s,” he explained, “you need to look at other causes, like leukemia, which can cause an increase in uric acid. Certain enzyme disorders or glycogen-storage disorders can also cause increased uric acid in younger people.”

The incidence of genetic predisposition to gout is rare, DeMello said. “It has to do with a certain URAT1 transporter in the kidney, which allows our kidneys to get rid of the uric acid. If we eat a heavy protein diet but have no other risk factors for gout, then we shouldn’t have a flare. If our kidneys and urate transporters are working as they should, then we should excrete all the extra uric acid.

“But sometimes that doesn’t happen,” he continued, “either because we’ve overwhelmed the system, like people with psoriasis — lots of skin flaking off; those skin cells are protein — or, in the case of kidney failure, because those organs, for whatever reason, aren’t filtering as they should.”

Usually, he emphasized, it is a dietary situation that leads to gout. But there is a condition of relative dehydration, he explained, sometimes found in joggers, that can also lead to the affliction.

“Marathon runners, the weekend warriors,” he said, “those people who don’t do much during the week but then go out and push themselves very hard, and they are thus relatively dehydrated. Not dehydrated in the true sense of the word, but relatively speaking. Given the right milieu, chemically or genetically, this could precipitate gout. If you remove fluid from the system by sweating — relative dehydration — the remaining fluid within you is more concentrated and more likely for crystals to form.”

“Gout has a very typical appearance,” said Ahmad. “The joint gets red, hot, and swollen. It can even mimic cellulitis or tendinitis. People will go to bed without any symptoms and wake up with a joint affected.”

Uric acid crystals tend to favor previously damaged joints, according to DeMello. “So if you had lots of knee damage — cartilage damage, arthroscopic procedures, whatever — if you get gout, chances are it will localize there.

“Overall, however, it does tend to favor the cooler joints,” he continued, “which is why you’ll see it in the toes and ankles, moreso than the hip or knee — more peripheral areas. There’s less circulation there, the circulation is slower, and there is more distance from the heart, so the blood cools down a bit by the time it gets there.”

When a patient with no history of gout comes to the ER or their primary-care physician, they would be diagnosed with a history, and then the joint would be aspirated to look for the crystals, according to Ahmad.

“Looking at the fluid under the microscope, one will see the typical, needle-shaped crystals,” he said. “There are other crystalline arthritities, like calcium pyrophosphate dihydrate crystal disease. They are slightly different, but present similarly. Bloodwork might show increased acute-phase proteins, like ESR, meaning that there is an acute inflammation in the body. Uric acid at the time of an acute attack is not a marker of the disease — it might be lower at the time.”

Once the initial presentation of gout is correctly diagnosed, it is established that the patient has the condition, and treatment proceeds accordingly. Other subsequent joints that become affected are presumed to be symptomatic of gout.

Untreated, a flareup of gout will go away on its own after a period of about one week. However, not only would the pain be significant, there is a danger of repeated, untreated gout attacks on a joint.

“So that joint will get inflamed and cooled, over and over,” he continued. “As part of the inflammatory process, the bone and cartilage is eaten away, and you will get erosive gout — destroyed joints. I’m not talking about one or two flares, but this is over a period of time.”

Treatment for the painful symptoms can be as easy as taking non-steroidal anti-inflammatories (NSAIDs), and Indomethacin is prescribed most commonly, “but no study has ever shown that it is better than any other NSAID,” Ahmad added.

NSAIDs cannot be taken by patients suffering from kidney or heart conditions, however, so colchicine is the preferred drug. All of these will typically reduce symptoms within 24 hours.

However, the vast majority of drugs for gout target the reduction of uric acid to treat whatever is causing those levels to be high. Ahmad said that the most commonly used medicines are xanthine oxydase inhibitors, like allopurinol, which works rapidly — within a week — to lower uric acid. There are some side effects, particularly for individuals with kidney problems, but he listed several possible alternatives.

But when it comes right down to it, he said, lifestyle and dietary decisions can alleviate or reduce the severity — or even the occurrence — of future outbreaks.

“Foods rich in purines, particulary organ meat, shellfish, anchovies, and sardines, should be avoided,” he explained. “Purines from vegetable sources are not as much a concern, but again, moderation is recommended. Lowfat dairy products, like skim milk, are helpful in decreasing uric acid.”

DeMello said that modern medicine has been very successful in treating gout.

“More often than not, if you watch your diet and take a xanthine oxydase inhibitor, you will not have a flare,” he said. “Every now and then you may have a tip-over into a small incidence, but it would seldom if ever be a fully-blown flare.

“However, it is not inevitable,” he added. “There are indeed many people that go through their entire lives without ever getting gout.”