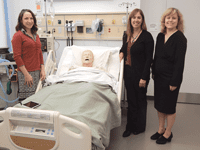 Emily Swindelles will graduate from Springfield Technical Community College next May with an associate’s degree in Nursing.
The path to matriculation hasn’t been easy for the mother of three children — ages 5, 3, and 2 — who has worked part-time and commuted from her home in Ellington, Conn., but she has had a lot of support from her family and fellow students, who have become like an extended family.
Swindelles’s dream is to work in a hospital maternity ward and eventually become a nurse midwife, so the 30-year-old was happy to hear that officials from STCC and Westfield State University signed an articulation agreement on Oct. 4 that will allow STCC nursing school graduates to earn a four-year degree from Westfield on the Springfield campus.
The new partnership is the first hybrid RN-to-BSN (bachelor of science in nursing) completion program between two public institutions of higher education in Western Mass. ‘Hybrid’ refers to the fact that it includes online classes as well as courses on the STCC campus that will be taught by instructors from Westfield State.
“I was really excited when I heard about the new program. It’s convenient, flexible, and cost-effective,” Swindelles said, adding that she is used to the commute, familiar with STCC, and likes the fact that, although the majority of coursework will be done online, classes on campus will provide students with the support and interaction that she feels enhances learning.
“I would have taken a year off just to make sure that I was financially capable of going back to school, but with the flexibility of this program, I think I’ll be able to manage school, work, and family,” she added.
Jennifer Hoppie is another STCC nursing student who is enthusiastic about the new program. The 39-year-old mother of two children, ages 11 and 9, moved to the U.S. from St. Lucia in 1999, and her goal is to work in the pediatric department of a hospital and earn a bachelor’s degree because it will increase her job options.
Prior to the matriculation agreement, Hoppie planned to work for a year after passing the board exam required to become a registered nurse, then enter a bachelor’s-degree program. But she says if she can continue her education at STCC after she graduates, she will choose that option because it will allow her to stay close to home in case she is needed at her children’s school.
“The price of the new program is also good; there are people like me who can’t afford expensive tuition,” Hoppie said, adding that she took out a loan to earn the degree she will receive in May.
Indeed, the new RN-to-BSN completion program is touted as the most affordable pathway of its kind; Westfield will accept 90 credits from students toward the 120 needed for a four-year degree, and the cost for the additional 30 course credits will be $10,500.
Christopher Scott noted that STCC has collaborations with other schools of nursing that allow graduates to pursue a bachelor’s degree, and it’s important for students to be aware of all of their options.
“Our goal is to remove any barriers to success,” said the interim dean of the School of Health and Patient Simulation, adding that the majority of STCC students are non-traditional, and many face financial or personal challenges that make getting an education difficult.
“We want them to be able to continue their education and flourish after they succeed here,” he told HCN.
Officials from both schools say the new program is also significant because it is in line with state and national goals to increase the number of nurses with bachelor’s degrees in the workforce.
“There’s been a national call to action from the Institute of Medicine to bring our BSN workforce up to 80{06cf2b9696b159f874511d23dbc893eb1ac83014175ed30550cfff22781411e5} by the year 2020,” said Jessica Holden, a nursing instructor at Westfield State and program director of the RN-to-BSN program.
Holden said the goal in Massachusetts is to increase the number of BSN nurses from 55{06cf2b9696b159f874511d23dbc893eb1ac83014175ed30550cfff22781411e5} in 2010 to 66{06cf2b9696b159f874511d23dbc893eb1ac83014175ed30550cfff22781411e5} in 2020, and to reach the national goal of 80{06cf2b9696b159f874511d23dbc893eb1ac83014175ed30550cfff22781411e5} by 2025. The goals were set by the Massachusetts Nursing and Allied Health Workforce Development Plan and implemented by the Massachusetts Action Coalition.
“There is a growing shortage of nurses, and we see our associate degree in nursing as an entryway into a bachelor’s program,” said Lisa Fugiel, director of Nursing for STCC’s School of Health and Patient Simulation. Although graduates can work as an RN after they earn an associate’s degree and pass their boards, she explained, nurses with a BSN are typically given more responsibility and supervisory roles. They also earn higher salaries, and many healthcare institutions are seeking nurses with advanced degrees to meet certain requirements.

Increasing Opportunities
Most colleges limit the number of credits a student can transfer, and the fact that Westfield’s hybrid nursing program will accept 90 is expected to make a real difference to STCC students.
“They might have to take 50 credits at another college to achieve a baccalaureate degree,” Scott noted, explaining that STCC and Westfield State have made the pathway easier by creating a ‘curriculum map’ that outlines prerequisite courses they need to enter the BSN program.
“It allows for seamless education,” said Marcia Scanlon, chair of the Department of Nursing at Westfield State.
Shelley Tinkham agreed, and said it’s important, because if students take the wrong electives, they will have to take additional classes to meet Westfield State’s entrance requirements. “The map was carefully developed as a partnership model,” said WSU’s dean of Graduate and Continuing Education.
Westfield State officials told HCN they began developing their own RN-to-BSN program, which launched this fall, about four years ago. The STCC-Westfield nursing-degree partnership was developed simultaneously, and everyone involved believes it will increase the number of students who pursue a bachelor’s degree.
“Massachusetts issued a call to action to be creative and innovative in creating a seamless pathway so nurses can progress, and the new hybrid program meets that call,” said Holden. “It’s a new model for Westfield State that is very affordable.”
She noted that the push at the state and national levels to increase the number of nurses with bachelor’s degrees was initiated because nursing has become more complex due to the changing face of medicine, which includes advances in technology and a growing number of patients with multiple health issues.

Critical Relationships
Sims Medical Center at STCC is the largest simulation facility of its kind in the Northeast and has received national recognition.
“We recreate the environment of every type of care in a hospital, from the trauma room to acute care, child delivery, and pediatrics,” Scott said. “We have our own operating room and critical-care unit, as well as a home-care environment.”
Students in the college’s 20 healthcare programs work with human patient simulators that breathe, sweat, have pulses, and react to care and procedures that range from arthoscopic surgery to removing a gall bladder.
“Students can take their blood pressure and do every medical technique on them possible,” Scott said, explaining that the goal is to expose students to situations that can occur before they enter the workplace.
And, since nurses don’t work alone, STCC students work alongside their peers, who are studying a multitude of healthcare disciplines, including respiratory therapy, radiology, and surgical technology.
In fact, STCC’s center is so high-tech that the college has worked with hospitals, medical centers, and higher-education institutions to help them build and operate their own simulation centers and avoid perils and pitfalls in the process.
Westfield State is among them, and Scott said officials sought the school’s help in developing a simulation center for the university’s $48 million Science and Innovation Center that opened this fall.
Westfield officials went to STCC, toured the campus, and met with faculty, administrators, and architects before designing their own space. They say the relationships that were formed played a role in the establishment of the matriculation agreement.
“Creating a transfer program is difficult, and historically, Massachusetts institutions have not done well with it. But the new program shows we can cooperate; it’s an excellent example of what can be accomplished, as it’s designed to be very flexible,” Tinkham said, noting that Westfield needed to pass a policy and ask its governing board to accept 90 transfer credits for the hybrid program because they normally accept only 67 from a community college.
“Dean Scott was very patient with us,” she continued, adding that Westfield State officials recognized that STCC has many non-traditional students and first-generation graduates who need a supportive environment and may not be familiar with WSU.
The nursing programs at STCC and Westfield State are both accredited. The baccalaureate degree in nursing at Westfield State is accredited by the Commission on Collegiate Nursing Education. STCC’s associate in science degree in nursing is accredited by Accrediting Commission for Education in Nursing Inc.

Ongoing Partnership
Westfield State University wants students entering STCC’s associate degree in nursing program to know they can earn a bachelor’s degree on the Springfield campus and plan to make them aware of the curriculum map at the beginning of each new school year.
“They will feel our presence on their campus from day one,” Holden said, adding that Westfield representatives will pass out brochures and be available to nursing students from the time they begin the nursing program at STCC.
She was hired at Westfield State a year ago, Tinkham has worked at the university for two years, and Scanlon has been there for five, but was named department chair a year ago; they all feel partnerships such as the new one with STCC are critical to the future of nursing.
“We’re already looking at other collaborations,” Tinkham said. “This is just the beginning.”
It’s a good beginning, one that not only addresses the workforce-development shortage, but will benefit the community as many STCC students become involved in charitable causes.
“Helping them to continue their education will allow them to give back even more,” Fugiel said, “and we are really excited to be able to offer them an affordable opportunity to do so.” 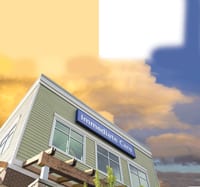 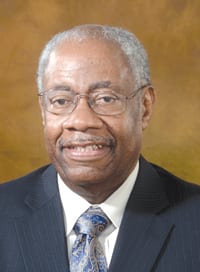