A threat by the state’s major pharmacy chains — and an 11th-hour effort to avert the potentially far-reaching effects of that threat — have exacerbated tensions between the state and drug sellers while refocusing lawmakers’ attention on the ongoing problem of Medicaid reimbursement.
With an Oct. 2 deadline looming for the state to make a final decision on the issue of reimbursement to pharmacies for drug costs, the feeling in Boston is that patients will continue to have access to drugs at their local pharmacies through Medicaid.

However, after threats to withdraw, a public hearing on the matter, and a commitment by state officials to take another look at those numbers, the pharmacies seem to be back in the Medicaid fold — for the moment.

However, in the Massachusetts health care community, where complaints about Medicaid reimbursement come regularly and with vigor, any hastily created compromise isn’t likely to make the underlying conflict go away.

Lines in the Sand

After the FY 2003 state budget was finalized in July, CVS immediately objected to the $60 million Medicaid reduction and set an Aug. 19 date for withdrawal from the plan. Within days, two other major chains, Walgreens and Brooks, jumped on the bandwagon with the same threat. Wal-greens set an Aug. 31 date to withdraw.

“The cuts approved by the Legislature and the governor create a program that is below our cost of operation,” CVS spokesman Todd Andrews said at the time. “So we are proceeding with plans to withdraw from Massachusetts’ Medicaid program.”

“This rate puts Massachusetts dead last in reimbursement among the Medicaid programs we participate in,” echoed Walgreens spokesman Michael Polzin. “We are developing a timeline to withdraw. If the rate is restored in the meantime, we’ll reconsider it.”

The problem was that Massachusetts lawmakers, faced with a more than $2 billion revenue shortfall, approved some $1.2 billion in new taxes plus across-the-board budget reductions in areas ranging from public education and the court system to public health.

Swift used her veto pen to counter many budget items and cuts, but she left standing the Legislature’s decision to deny Medicaid coverage to up to 50,000 long-term unemployed residents, as well as the reduction in reimbursement to pharmacies.

“We’re disappointed she chose not to right a wrong inflicted by the Legislature,” said Allison Staton, spokeswoman for Health Care for All, after Swift allowed those two Medicaid cuts to stand.

Pharmacies, of course, did more than express their disappointment. The triple threat by the major chains was taken seriously by lawmakers, if only because of the number of people that would be affected by a pullout. Together, the three companies operate well over half — 555 — of the state’s 1,014 drugstores and provide 60{06cf2b9696b159f874511d23dbc893eb1ac83014175ed30550cfff22781411e5} of the prescriptions used by Massachusetts’ 900,000 Medicaid recipients. CVS alone fills about one-third of the state’s prescriptions.

Robert Gittens, the state’s secretary of Health and Human Services, jumped into the fray and asked the companies to suspend their withdrawal from Medicaid for two months to allow the state to hold a hearing on the impact of Medicaid reductions, after which the state could conceivably alter or reverse the cuts.

“We are calling on them as good corporate citizens to provide an opportunity for us to respond to this without jeopardizing the health and safety of the population that has relied upon them,” Gittens said.

Swift appreciated the restraint by the companies in waiting until after the hearing to make a decision on withdrawing from the program. She was also confident that any resolution would prove acceptable to both the state and the chains.

“We have reached an agreement that will keep our most vulnerable citizens eligible to get access with CVS, Walgreens, Brooks, and major pharmacies,” Swift said.

According to the National Association of Chain Drug Stores, although other states have reduced reimbursement rates to pharmacies in order to realize Medicaid savings, the situation in Massachusetts marked the first time that large chains have seriously threatened to withdraw from the program.

It’s a threat that others in the health care community, including hospital administrators, have roundly criticized (see guest opinion, page 4), maintaining that pharmacies have many more ways to make up for the revenue loss than doctors and hospitals do.

In fact, according to Douglas Lapp, senior health policy analyst at the Mass. Division of Health Care Finance and Policy, who testified at the Sept. 5 hearing, the wholesale acquisition cost (WAC) of drugs reported by pharmacies does not take into account the rebates and discounts commonly given to pharmacies.

At the very least, critics of the pharmacies’ threat say, pulling out of Medicaid would throw an element of chaos into the lives of those who rely on them to dispense medications.

“There is no guarantee that at the end of this process, it will be a rate that every one of the pharmacies is comfortable with,” Swift said, “but we have staved off, I think, a major crisis in having our neediest citizens get access to drugs.” 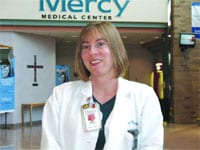