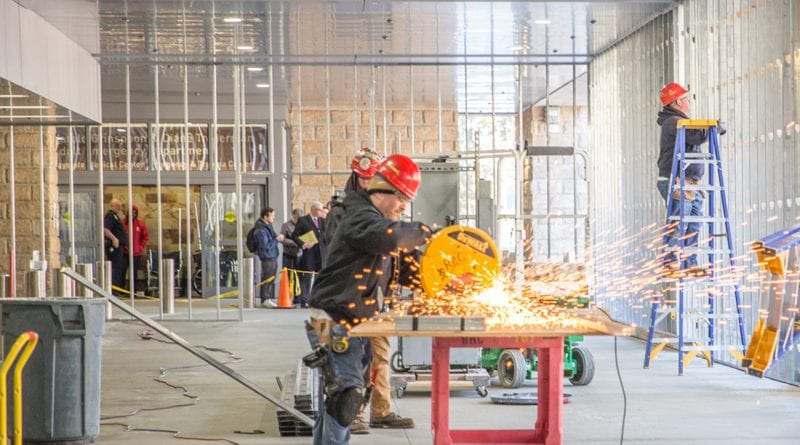 SPRINGFIELD — The Emergency Department was rather quiet at Baystate Medical Center on Monday morning.

And Dr. Niels Rathlev, chair of the Department of Emergency Medicine, attributed this to the fact that the public is listening to the governor and other elected officials and staying away from the ER unless they really need to be there.

But that relative quiet in the ER — one spokesperson for the hospital described it as “almost eerie” — is almost certain to be short-lived as the spread of COVID-19 continues in this region. And that eventuality was the inspiration for the construction of a rapid-response triage facility just outside the entrance to the ER.

“Right now, this [triage] is happening inside the building; if we have numbers of patients coming in that require screening, we need to do this somewhere else, and this is where that’s going to happen.”

Crews began work on the facility last Friday, and it is due to be completed by the beginning of next week, Rathlev told a group of reporters struggling to hear him over the sounds of the construction going on behind him. It is expected to hold roughly 35 to 40 chairs — each of them six feet apart — for individuals entering the ER.

“There’s community transmission of the virus at this point,” said Rathlev. “And we really are preparing for more patients showing up for screening. This is not to expand testing; the real issue is to try to keep patients that don’t require admission to the hospital — acute emergency care — and screen them rapidly out here.

“The next step is to really to develop protocols and figure out how we’re actually going to move patients through, as opposed to bringing them in through the building,” he went on.  “Right now, this [triage] is happening inside the building; if we have numbers of patients coming in that require screening, we need to do this somewhere else, and this is where that’s going to happen.”

Construction of the triage center is a step that mirrors what is happening in other parts of the country, Rathlev noted, adding that some areas, such as the state of Washington, established such facilities days or weeks ago in anticipation of a surge in visits to the ER and the critical need to triage those coming in. Those communities are sharing best practices, and Baystate will learn from them as they put this facility in operation, he added.

“If you look at trauma centers in Boston and Worcester, we’re all preparing for this,” he said. “Washington State and California are ahead of us for obvious reasons — they’ve had multiple, multiple cases — so they’re sharing protocols with us, and we’re sharing as well.”

Western Mass. Walk to Defeat ALS Set for May 14