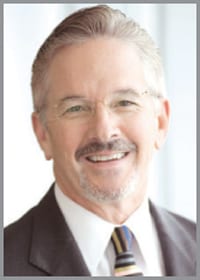 SPRINGFIELD – Baystate Health President and CEO Mark R. Tolosky, JD, FACHE, who has devoted most of his career to advancing the field of health care in Massachusetts, has been awarded the prestigious 2012 William L. Lane Hospital Advocate Award from the Massachusetts Hospital Association (MHA) in recognition of his “exceptional leadership.”

Tolosky, who has transformed Baystate Health during his 20-year tenure there into one of the Top 15 health care systems in the country as recognized by Thomson Reuters, received the award at the association’s annual meeting in June in Brewster.

“I am most appreciative of this recognition and humbly accept the Advocate Award on behalf of the entire Baystate Health organization, of which it is my privilege to serve. I am most grateful for their support over the years,” said Tolosky.

“Everyone at Baystate shares in our success and can be proud of their achievements in support of our core mission of patient care,” he told a gathering of health care professionals at the annual Awards Dinner. “Because of their dedicated efforts, our operation is extremely efficient and is the least costly academic medical center in Massachusetts. Our quality and patient safety journey has placed us in the upper echelon of the finest health systems in the country.”

Lynn Nicholas, president and CEO of the MHA, noted that in his 20-year journey with Baystate, Tolosky “has driven the transformation of the North End of Springfield into a vibrant ’medical mile,’ constructing new facilities, creating jobs, improving the local community and contributing to the economic development of the city.

“Under Mark’s leadership, Baystate Health and Health New England are also nationally recognized for top levels of quality and safety, most notably through advances made in clinical care, the adoption of health information technology, and the development of team-based and patient-centered medical homes,” Nicholas added.

Each year at the association’s annual meeting, the MHA publicly acknowledges one senior hospital executive who exemplifies exceptional leadership and the characteristics to which all hospital and health system leaders should aspire.

The award is given in recognition of a CEO’s outstanding efforts to advocate on behalf of their hospital, their passionate commitment to their institution’s mission, and the effects of their work in the health care community, as well as to the individual’s innovative and positive leadership, and their extraordinary advocacy to achieve health care access, and high-quality, safe care for all.

The MHA Executive Committee reviewed all award nominations taking into consideration the CEO’s individual contributions to, and sustained efforts on behalf of, the health care community. According to Nicholas, it was the first time in the nine-year history of presenting the award that the Executive Committee was unanimous in its selection.

Tolosky was nominated by Richard B. Steele Jr., chairman of the Baystate Health Board of Trustees, and his senior leadership team at Baystate Health. His nominees submitted essays describing Tolosky’s leadership with deep admiration and chronicled a long list of organizational accomplishments.

“Mark sets a stellar example as a CEO who tirelessly advocates for improvement, inclusion, responsibility, preparation, taking the ’high road,’ and the importance of collaborative, positive relationships,” noted one letter in support of Tolosky’s nomination.

Another supporter took the time to recognize the fact that, “Mark seeks out many opinions, gives voice to concerns, and defends his community’s best interests. During his tenure at Baystate Health, his commitment has extended beyond traditional health care to include economic health and community well-being.”

Another supporting letter referred to Tolosky as a “trailblazer,” both as a leader and as a role model for professionals in the health care field. The nominee also noted his “passion for leadership, commitment to excellence, and ability to create positive, supportive relationships with staff and clinicians at every level — at all points across the health system — has made him an outstanding CEO and mentor.”

Asked what he is most proud of during his time at Baystate Health, Tolosky’s response has always been, “Humanizing our leadership and touching patients, families and staff — one person at a time.”

Today, Tolosky has something new to be proud about — overseeing a $296 million expansion project at Baystate Medical Center featuring construction of a 600,000-square-foot facility whose first phase saw the opening of the state-of-the-art MassMutual Wing and Davis Family Heart & Vascular Center in March, to be followed this December by the opening of a new Emergency Department that is more than three times larger than its current space.

“When people look back, years from now, they’ll say … ’a courageous group of people made a decision to move forward with building this hospital despite one of the largest economic recessions in history,’” he said. “Secondly, they’ll say it was a legacy of love for this community that inspired us. And third, it is a proud legacy of all those people who came before us that got us to this point,” he said.

Tolosky holds a juris doctor degree from the University of Maryland School of Law in Baltimore. He earned his master’s degree in Hospital and Health Care Administration from Xavier University in Cincinnati, Ohio, and received his undergraduate education at the State University of New York at Binghamton. He has been admitted to the Maryland Bar and the Federal Court.

Tolosky began his career in health care at Franklin Square Hospital in Baltimore, before relocating to Boston as chief operating officer of the Faulkner Hospital. Prior to joining Baystate in 1992, he served as executive vice president at Mount Auburn Hospital in Cambridge.

Last Cigarette – There Are Plenty of Good Reasons to Quit Smoking

Health-reform Lessons from Haiti and Peru