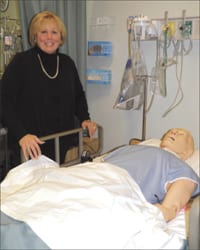 When Carol Jobe graduated from a hospital program in the ’60s as a registered nurse, the job was fairly straightforward.

“We had to learn to do tasks, such as making a bed correctly,” recalled the dean of the School of Health Services at American International College. “And we learned about different diagnoses, their symptoms, and the treatments for them. Then we followed the doctors’ directions. They were the end all and be all.”

Since that time, however, the profession has undergone dramatic changes, and advances in medicine and technology have made it necessary for 21st-century practitioners to attain advanced degrees in education to do their jobs. As a result, hospital-based training programs have become all but extinct, and employers, who include hospitals and health care agencies, typically require new hires to have a bachelor’s or master’s degree in nursing.

“A bachelor’s degree is required for entry-level positions, and if people want to specialize, they need a master’s degree because they will be making more independent decisions,” Jobe said. “If you look at the evolution in nursing, you can understand that education has had to become sophisticated because the demands are great and the profession is continuing to evolve along with medicine.”

Nursing schools have been aware of the need for increased education for some time, but a report issued last year by the Institute of Medicine, titled “Health Care Reform and the Future of Nursing and Nurse Practitioners,” brought the issue to the forefront. The document states that 80{06cf2b9696b159f874511d23dbc893eb1ac83014175ed30550cfff22781411e5} of nurses will need bachelor’s degrees by 2020, and the number who pursue graduate degrees must double in order to keep pace with the changing face of health care.

Nursing jobs pay well, with salaries typically starting at about $60,000. “But we are not producing enough nurses to keep up with the demand; the problem is that we don’t have enough people to teach the students,” Jobe said, adding that the issue of an inadequate supply of nurses cannot be solved until there are enough qualified teachers who have obtained, at minimum, a master’s degree in Nursing.

Nurse educators are needed not only to teach in classroom settings, but also to oversee students’ clinicial experience. For example, Jobe said, when students are in the ob/gyn department of a hospital, there must be one instructor with four students or fewer.

However, returning to school is difficult for working professionals who have families and other responsibilities. A large number of registered nurses obtained their certification by earning an associate’s degree, then passing a state exam, and have not furthered their formal education since that time.

“Nursing schools are paying attention to the institute’s report, but the problem is that we need a more seamless transition in education,” Jobe said.

To that end, AIC has created a new pathway for nurses who are already working in the field. It will launch in June, and is called the ADN to MSN (associate’s degree in Nursing to master’s in Nursing) program.

It has taken AIC 18 months to create the program and obtain certification from the Commission on Collegiate Nursing Education and the New England Assoc. of Schools and Colleges. But it is set to go and expected to be a fast track to success. Nurses with an associate’s degree will take 24 credits over a one year period, which will give them a bachelor’s degree, then immediately continue taking another 36 credits to earn their master’s degree.

Jobe is proud of the initiative. “It is a seamless program that was created to recognize and support the advancement and education of nurses,” she said. “We are the safeguards of the field and need to stay on the cutting edge, so it was our obligation to the profession to create this program. It addresses the needs of people who are caught in the transition.”

When nursing education began to move from hospitals to college campuses, the field splintered, said Jobe, and many different degrees were created, which made it difficult for the public to understand what the designations mean.

They range from licensed practical nurse, which requires passing a state exam, to a doctoral degree in nursing. Since the curriculum and requirements for degree programs have varied at institutions of higher learning, it can be difficult for students at community or junior colleges to determine what courses to take to meet the prerequisites for four-year nursing schools. “Nursing schools have been challenged in terms of developing education,” she explained.

But in spite of their differences, training has advanced along with medicine as a whole. This is critical, since nurses today need to be knowledgeable in many arenas, including diagnostic procedures such as an MRI, CAT scan, or angiogram. “The nurse has to get the patient ready for the test, care for him or her afterward, and understand what happened during it so he or she can determine whether the patient’s reaction is normal,” Jobe said.

This requires a great deal of training. In addition to classroom learning, nursing students at AIC work on simulators, which instructors can program to talk, breathe, and react the way a person would who is ill or injured.

“The simulation has become very high-tech,” Jobe said, adding that an instructor behind a screen is able to project his or her voice through the mannequin as students assess its condition. “It can begin hyperventilating, can tell the student, ’you are hurting me,’ and simulate almost anything else, which adds another dimension to what the students learn. Education has become very sophisticated to meet the needs of the medical environment.”

And since the importance of taking a holistic view to patient care has been well-documented, nurses are taught that the mind-body connection is powerful.

“Patients are people, and what students learn in theory has to be put into practice,” Jobe said, as she continued to compare training in previous eras to today’s standards. “In the past, nurses just looked at the symptoms. Now we look at the whole patient and question why we are doing what we are doing. There is a more collegial relationship with doctors today, as nurses do the majority of patient care.”

Jobe said that, in most institutions of higher education, students in programs such as occupational therapy, physical therapy, and nursing are kept separate from one another.

But AIC has integrated these students, encouraging a team mentality toward health care. Jobe said they adopted this position because team meetings take place in hospitals, rehabilitation centers, and other workplaces, so graduates need to learn how to effectively confer with their peers.

Members of a team can include a respiratory therapist, physical therapist, occupational therapist, nurse, doctor, social worker, psychiatrist, and other medical specialists. “Many things play into how a patient feels. If the patient is depressed, he or she won’t heal as fast,” Jobe said, adding that the group consultations can lead to referrals, which ultimately result in more comprehensive and better care for patients.

AIC also has faculty members in these fields of study “cross-teach” courses.

“When you have a physical or occupational therapy student working alongside a nursing student, they can start exchanging information. It results in a team effort, and that is where health care is headed,” Jobe said. “It has become so complex and sophisticated that it makes it easier if people on a team really understand what the other members do. This is a different approach for students, but in the end, it can only benefit the patients they will serve.”

A variety of programs have been springing up across the nation to help nurses get more education. But the “seamless approach,” which Jobe says has become the catchphrase of the Institute of Medicine’s report, means that existing programs need to be examined and new ones must be created.

“It is a challenge we have taken on,” she said, adding that AIC’s ADN to MSN program is innovative and allows people to get a master’s degree in an easy and efficient way.”

The program will expose students to a wide variety of experiences, including working on cadavers, and every aspect of it is important, since advances in technology have driven many of the changes in the profession.

“It’s easy to get fixated on the technology, so we have made our program very person-centered; there is a lot of hands-on work,” Jobe said. “The whole idea is for nurses to learn to listen to patients and integrate what they say with their theory and knowledge.”