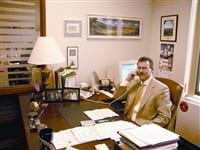 The issues aren’t new ones.
Hospital administrators in the Commonwealth continue to fret over inadequate reimbursements from Medicaid, the soaring costs of liability insurance for physicians, and how to reduce medical errors, among other issues.

On the other side are state legislators, who are aware of the needs of health care — Massachusetts’ top-employing industry and one of its main economic drivers — but have to balance those needs against some very limited funds, particularly in these days of budget crunches.

Given that the goals of those two groups are so different — yet in many ways intertwined — solid communication becomes crucial. But how do medical administrators get lawmakers’ ears?

There are a number of ways, actually.

“We have very positive relationships with elected and appointed officials both within Greater Springfield and statewide, with the legislative delegation and the governor’s office,” said Steven Bradley, vice president for government relations at Baystate Medical Center.

“Those relationships really get built on a one-to-one basis, and it takes time, effort, and genuineness on both sides to create an environment of trust and frankness, where people are willing to sit down and talk about complicated and difficult issues. Over a period of time, there’s a lot of information exchanged back and forth.”
Education, then, is crucial. Lawmakers often don’t have much knowledge of how hospitals and other health care organizations really operate, while medical administrators often aren’t schooled in the workings of law. And it’s easy for both to become fixated on their own budget concerns without grasping the plight of the other.

Not every hospital has an employee like Bradley, serving mainly as a legislative liaison. But every hospital certainly has administrators with their fingers on the pulse of both the Massachusetts State House and the U.S. Congress because they know how starkly decisions made many miles away can affect their day-to-day operations — and perhaps the quality of care that patients receive.

To hear Bradley tell it, the strength of a hospital’s communication with lawmakers can reflect directly on the bottom line.

“The reason having a relationship with elected and appointed officials is so important is that, at Baystate, close to 50{06cf2b9696b159f874511d23dbc893eb1ac83014175ed30550cfff22781411e5} of our revenue derives from Medicare and Medicaid programs, so it’s quite important for us to have a good relationship with our funding sources and be able to participate with them in the development of policy and rate payment decisions,” he said.

The reimbursement issue is a cry that’s been sounded by hospital administrators for years. Medicaid currently pays only 71 cents, on average, for every dollar hospitals spend on care, so hospitals begin each day trying to make up a financial disadvantage.

“Seventy-one percent,” Bradley repeated. “That’s a huge loss, and it basically jeopardizes the overall health of any hospital or health system. That’s an issue being debated in Boston and Washington, and it will become an even more critical issue as the Baby Boom generation continues to age and our consumption of high-quality health care services goes up.”

Vincent McCorkle, president and CEO of Mercy Medical Center, agreed that lawmakers need to understand the Medicaid situation and how it affects institutions.
“When you look at Massachusetts, 40{06cf2b9696b159f874511d23dbc893eb1ac83014175ed30550cfff22781411e5} of the budget is dedicated to health care issues, and 23{06cf2b9696b159f874511d23dbc893eb1ac83014175ed30550cfff22781411e5} goes toward supporting medical assistance, or Medicaid,” McCorkle said. “So we believe that maintaining these relationships and providing ongoing education is essential if we’re to maintain the services throughout our health system.”

Other issues regularly come to the forefront as well. Medical liability insurance costs are spiraling out of control in some specialties, Bradley noted, already causing some exodus from the state from physicians who can’t afford the rates. In addition, a number of ob/gyns have begun to focus only on gynecology because of the insurance burden of obstetrics, leaving a growing access problem for patients.

“They’ve given up the practice of delivering babies because they couldn’t afford the liability insurance, which was costing them $100,000 a year,” he said.
Reducing medical errors is another key issue on which both hospital administrators and lawmakers have worked together, with a number of pieces of legislation on the table addressing various aspects of medical safety.

“I think the Western Mass. delegation is very accessible to us, and I think they have a good, working understanding of what the issues are facing us,” McCorkle said. “But I’d be the first person to say it’s incredibly complex. The issues that affect acute care are different from the ones that affect behavioral health or senior care, and rehabilitation falls under a different bailiwick than home care.”

Mercy doesn’t have a specific administrator who serves mainly as a legislative liaison, McCorkle said; instead, different employees serve as liaisons at different times.
“For example, if there are issues in, say, behavioral health, we have an individual that leads our behavioral health network who would assume that responsibility. If there are global issues for the system, I get involved. It depends on the situation.”

McCorkle noted that Mercy’s mission statement calls on the hospital to be a transforming and healing presence in the community, and he said educating people — including lawmakers — is a key component of meeting that calling. That’s accomplished partly through a quarterly newsletter targeted at policy makers, but also through the day-to-day relationships cultivated with them.

“We have members of our staff that serve through the Mass. Hospital Association, and for quite some time, I served on their Standing Committee on Political Affairs,” he said. “And we get involved by making trips to both Boston and Washington on a periodic basis.” That works both ways, such as when Mercy invited Christine Ferguson, the state’s new commissioner of Public Health, to speak in Springfield on budget issues.

“As a not-for-profit, we can’t influence legislators by contributing to campaigns and PACs,” McCorkle said. “The way we need to make our story heard is through these different avenues.”

Bradley agreed that a crucial part of the liaison role is to ensure an accurate exchange of information.

“Oftentimes, the government speaks a language that’s foreign to the health care system and needs to be interpreted, and the same thing happens in health care,” he said. “We speak in a language that’s not always understood by elected and appointed officials, so we do a lot of translating and facilitating so they understand all the different aspects of health care, from the finance end of it to the clinical end.”

Bradley also works with clinical staff administrators to help them understand the critical role that government officials play in the health of the system.

“Health care is the most heavily regulated industry in the country, so it’s critical that we have open communication with officials so they understand the impact of these regulations, and also understand both the benefits and costs of these mandates.”

Bradley pointed to plenty of visible fruit produced by efforts to cultivate relationships with government, including funding for Baystate’s new cancer center and biosciences project, among other initiatives.

“From our perspective, we have very open, clear, and timely lines of communication with city government as well as with state legislators,” he said, adding that it doesn’t hurt to get lawmakers into the hospital to observe the direct effects of some of the projects being funded.

Those kinds of initiatives, McCorkle echoed, as well as any financial relief the state can come up with, affect not only patients, but those who work in the health system as well.

“It’s our responsibility to advocate for the people who use our services, as well as for the 4,000 people who work for us,” he said. “But our legislators have been effective. As a group, they’re a minority in Boston, so to represent Western Mass., they have to act cohesively, and generally they do.”

And it all starts, he stressed, with education. .