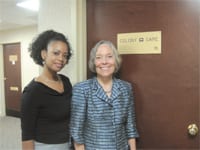 When Patricia Clark’s father was diagnosed with Alzheimer’s disease, she thought she was well-prepared to care for him due to her 15 years of experience running two home health care businesses and 10 years as the executive director of Greater Springfield Senior Services.

But she found that wasn’t the case.

“The whole process taught me what I really didn’t know about the disease, about what I could have done better to help him and myself, what medications he needed, and how to deal with his behaviors,” she said, adding that her efforts to care for her father became a challenging, yet fullfilling, learning experience.

Clark adds that part of this learning experience was dealing with her mother’s reaction to the the illness, something she wasn’t prepared for. It provided more hard evidence that, in such situations, an entire family needs support, not merely the individual suffering from an illness or injury. After her father’s death, the experience prompted Clark to actively support the need for awareness of the disease, and she spent five years as the executive director of the Alzheimer’s Assoc. of Connecticut.

It is just this type of deeply personal and professional experience that prompts Alan Popp, CEO of the Mason Wright Foundation in Springfield, to conclude that Clark is uniquely qualified to lead an intriguing new venture launched recently by the Springfield-based organization called Colony Care at Home.

Headquartered in West Springfield, the new service will, as the name suggests, provide compassionate care in the home to individuals of all ages and with a variety of needs. The new company will offer flexible-care services seven days a week, ranging from a few hours per day to round-the-clock, 24-hour care.

It was launched with a variety of goals, said Popp, but especially the desire to meet a recognized need in the community, while also creating another important revenue source for the Mason Wright Foundation, which funds the Mason Wright Retirement Community on Union Street in Springfield, a facility that includes an assisted-living facility with assisted memory care, independent-living apartments, and a community center.

Being a donor-supported foundation with more than 100 years of service, the mission is to provide quality housing and daily living services to support the dignity and independence of seniors without regard for their ability to pay, said Popp, adding that new revenue streams are critical to efforts to carry out that mission.

“We decided to think outside of the box and consider how could we serve the low-income residents we were already serving and have positive cash flow. We came up with an idea that we know will serve our area very well,” said Popp, adding that, while there are several existing home-care providers in the region, research indicated that there were opportunities in the market for a venture with the right blend of services.

Clark, who will serve as COO and director of client services, said Colony Care at Home has that mix, as well as a compassion-centered approach that should enable it to thrive. Meanwhile, the timing of the launch is favorable, she told HCN, adding that, while the new venture will serve individuals of all ages, it will be an important community resource as Americans continue to live longer and the massive Baby Boomer generation reaches retirement age.

The roots of the Mason Wright community trace back to 1892, when an African-American real-estate investor by the name of Primus Mason left $25,000 to create a home for “worthy old men.” The Wright name was added in 1944 when Horace Wright, a Springfield-based cigar manufacturer, left an even larger amount after his death.

Estate and trust gifts continued through the decades, providing a solid base on which to operate the facility, said Popp, adding quickly that, in recent years, he and the board of directors came to the conclusion that additional revenue sources would be needed to enable Mason Wright to carry on its work.

“We can’t change our business model, because care for anyone, regardless of their ability to pay, is our mission,” he told HCN, adding that new means of revenue generation were explored for more than a year.

Everything from fee-for-service day programs to investments in hotels were considered, he continued, and studies were undertaken to identify additional options. However, the team at Mason Wright kept coming back to ideas that wouldn’t be very capital-intensive and would allow the foundation to continue to serve more people in need.

A home-care component was eventually identified as the most practical option, said Popp, adding that the name Colony Care at Home was chosen because it is easy to say, and “I like the linkage between the 13 colonies and independence at home.”

And providing a needed sense of independence is at the heart of the new venture, said Clark, adding that it will provide residents in Western Mass. and Northern Conn. with a variety of services.

Nicola Edwards Taylor, manager of client services at Colony Care at Home, said that any person of any age may need at-home care at some point.

“It’s not just the elderly that need help,” she explained, offering examples such as a person recuperating from a car accident, a veteran returning from war with post-traumatic stress disorder, or those with multiple sclerosis. Assistance needs can be temporary or long-term.

For instance, Taylor currently cares for a 23-year-old man who suffers from muscular dystrophy. His physical movements are considerably compromised, but he would likely not do well in an assisted-living setting with clients more than 50 to 60 years older, she said.

“Young people don’t do well with living in those places; they need social interaction with those their own age,” said Taylor, adding that the freedom and independence afforded by Colony Care makes for an overall healthier solution for the situation.

Popp noted that there are two categories of service that Colony Care covers. Senior care includes assistance that is non-medical in nature, meaning physical needs such as bathing, brushing teeth, and getting dressed; daily needs such as cooking, cleaning, and doing laundry; and companionship for reading, shopping, or going to church. The other component is respite assistance, which helps individuals caring for loved ones get much-needed relief.

“Many caregivers who end up finally researching assistance for care in the home have the same reaction — they say, ’I just need a break; just a little break,’” he noted, adding that this sentiment is one of the reasons he will be reaching out to area employers and educating them about Mason Wright’s new services. When employee productivity goes down due to exhaustion suffered by the caregiver, an employer should be aware that there is help, he said.

As an example of this respite form of service, Taylor told HCN about a man who walked into the company’s West Springfield offices a few weeks ago looking for help.

“He was exhausted; he’d moved in with his mother to help care for her, and with the round-the-clock care she needed, it was draining him,” she said, adding that many members of the so-called ’sandwich generation,’ who are caring for both young children and elderly parents, find themselves in a similar state at some point.”

Taylor said that the services that Colony Care at Home offers would have been the perfect solution for his situation, but unfortunately the potential client said his mother “wasn’t ready for anyone else to care for her.”

And this reaction is not atypical, she went on, adding that many seniors are intimidated by the prospect of having others care for them, just as they are when they are faced with the decision about whether they should move out of their home.

Popp acknowledged that there’s a good deal of competition in the home-care sector, but he believes Colony Care at Home will stand out in the market, in part because of the extensive training process involved in hiring caregivers.

He said the company is the exclusive regional provider of what are known as certified companion aides (CCAs). These individuals study 19 essential subjects, including communication, personal care, mental health and illness, disability issues, and nutritional needs of clients. They must meet very high standards, are bonded and insured, and have the skills necessary to handle multiple daily challenges.

“No matter how long they’ve been in the industry, they will have one full day of training to our high standards,” said Popp. “Basically, we want our clients to know that we’d be happy to have these caregivers provide assistance to our own family members.”

Time will tell if Mason Wright will be successful with its new business venture, but Popp and Clark believe that the organization has created the right product at the right time.

This will be a venture dedicated to meeting two missions — helping to provide a critical measure of independence for people unable to fully care for themselves, and also providing the revenue needed for Mason Wright to carry out its work in the community.

Popp is confident that the new business will succeed with both assignments, and is commiteed to bringing the concept home — both literally and figuratively.