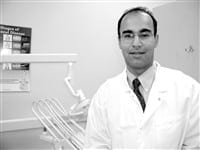 Dr. Runjan Seth says there are many reasons why some people simply don’t go the dentist.

The cost of treatment is a big factor, he told The Healthcare News, as is access to quality care. And then, there’s the inevitable embarrassment that people would feel after settling into a dentist’s chair after years, perhaps decades, of neglecting their teeth.

“Those are all barriers,” said Seth, current director of care at the new West Springfield location of New York-based Aspen dental, the largest dental practice management group in the Northeast. “What we want to do is remove those barriers.”
That’s what Aspen has been doing for the past 20 years, said Seth, noting that the company specializes in providing care to the 40{06cf2b9696b159f874511d23dbc893eb1ac83014175ed30550cfff22781411e5} of the population that does not make regular visits to a dentist.

Aspen made a 2,100-square-foot storefront in the Riverdale Shops on Route 5 its 45th location in the Northeast, and its first move into the Western Mass. market, said Vicki D’Agostino, a spokesperson for the chain. And more local offices are planned.

East Longmeadow is the probable site of one location, which may open later this year, she said, adding that sites are also being scouted in Springfield and other communities.

Seth told The Healthcare News that the Aspen model, similar to that used by a growing number of practice management outfits, has worked in many other regions, and it is already off to a good start in Western Mass. That model provides benefits for patients, in the form of comfort, convenience, affordable care, and a wide range of services, he said, and benefits for dentists as well.

“In this model, I can focus on dentistry,” he explained, “not on finding real estate, managing an office, and dealing with a host of administrative and regulatory issues. I can focus on my patients.”

Seth told The Healthcare News that the volume of business recorded in the West Springfield office’s first few weeks confirmed that, in this area, as in many other regions, there is a large population that he calls “not compliant.”

These are individuals who will usually see a dentist only in times of emergency. Many of these individuals don’t have insurance, he explained. Some do, but they have, for whatever reason, neglected their teeth and need some incentive to get back in the chair.

To be more precise, such individuals need a “comfort zone,” said Seth, and Aspen is designed to provide just that.

“We want to make people feel at ease,” he explained. “We want to break down those barriers, and we do that by providing accessibility, having convenient hours, staying open on weekends, taking most dental insurances, and taking walk-ins.

“We want to take away all those excuses that people come up with for not going to the dentist.”

The model has worked in other areas, said Seth, who supervises Aspen’s dental operations in Massachusetts and is currently the dentist in residence at the West Springfield office — soon to be succeeded by a permanent on-site dentist. The company also has practices in Connecticut, Rhode Island, New York, New Hampshire, and Pennsylvania.

Each office provides a full range of services to patients, including general and cosmetic dentistry such as teeth whitening, hypiene and oral surgery, and fixed and removable prosthetic dentistry. The company also specializes in dentures, offering patients a choice of eight styles of full and partial dentures.

Aspen looks to place its offices in high-visibility areas such as the Riverdale Shops, areas that provide easy access and ample parking, said D’Agostino. She told The Healthcare News that the company has several offices in the Boston area and has been moving west over the past several years. Offices were recently opened in Worcester and Leominster, she said, and five new locations are planned for the Worcester/Springfield area.

She said Western Mass. has a desirable demographic for the company, and the area is not currently served by many practices that cater specifically to the not-compliant client population.

“When we come into an area, we’re not taking patients away from other dentists,” Seth explained, “because most of the people we see haven’t been going to a dentist.”

In addition to bringing benefits for patients, the Aspen model is also attractive to dentists, said Seth, who told The Healthcare News there is a growing trend in dentistry for practitioners to join larger practices, such as Aspen, rather than put their own name over the door.

“There are many advantages to this business model,” he said. “For starters, running a practice is a load — there are a lot of regulatory issues to deal with today. It’s hard to go into dentistry and keep up with all those regulations.”

“By joining a practice like this, a dentist can focus on dentistry and let the management company handle the backroom operations,” he said. “We have four years of dental school behind us, but most of us don’t have any business background.”

Another benefit to the Aspen model is the ability dentists within the group have to share ideas and gain insight from their colleagues. “Dentistry is often an isolated exercise,” said D’Agostino. “Here, people can bounce ideas off one another. There is a lot of shared knowledge.”

That’s what Aspen wants to eliminate — for patients and dentists alike. The company has a 20-year track record for success, and it has every reason to believe it can continue that tradition in Western Mass.

If it can, then many people will have reason to smile.