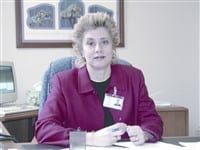 “When you look back at the history of home health care, you find it reaches back to Florence Nightingale,” said Kimberly Andrews, executive director of Noble Visiting Nurse and Hospice Services, Inc.

“We are one agency with two separate programs,” she said. “One is our visiting nurses program, which provides home health care for people who need help to return to the full potential of their lives. The other is hospice care for terminally ill patients with a life expectancy of six months or less.”

In the former case, visiting nurses and other specialists take on many of the tasks that were formerly performed in the hospital. Such services include intravenous therapy, all manner of postoperative care, speech therapy, occupational therapy, physical therapy, diet and nutrition counseling, laundry services, and more.

Andrews noted the role that medical insurance plays in these services. She used intravenous therapy as an example.

“Ten years ago, you would never have gone home for an antibiotic IV, but now, insurers won’t pay for a hospital stay for that,” she said. “For a time, such patients were handled through the emergency room, but that practice ended some years ago, which was good because it eliminated congestion in the ER.”

Andrews said IV therapy begins at the hospital to watch the patient for reactions to the antibiotic, but once a safe medication is established, a visiting nurse schedule is arranged to fit the patient’s regimen.

In this way and many more, visiting home health care offers clear rewards as nurses and specialists see their patients gradually — and literally, in some cases — get back on their feet. Taking care of patients in their own homes toward the end of their lives, however, offers special challenges, and the rewards are more bittersweet. That is where the hospice programs come in.

The hospice concept itself is relatively new. It began in 1987 in Great Britain and arrived in the United States shortly thereafter.

“Originally, hospice programs were begun to comfort terminally ill cancer patients,” Andrews said. “They have since opened to terminally ill patients dying from other causes, such as Lou Gehrig’s disease, renal and cardiac failure, and others.”

Basic hospice services are provided through a team approach that includes a specially trained RN, a social worker who works with the family and the patient, home health aides, and a nondenominational chaplain. Noble will also provide clergy of a particular faith if desired. “We’ll provide services right up to the eulogy,” said Andrews.

The primary concerns for hospice specialists are the wishes of the dying patient. Sometimes, this means providing services outside the home. Calling upon her own experience as an emergency room nurse, Andrews recalled incidents in the days before hospice services became common.

“We’d have a terminally ill patient come in,” she said, “and without any other information, we were obligated to revive the patient even if that meant they might die an hour later. Now, the hospice provider can call ahead to the ER and let them know if they are facing a ‘do-not-resuscitate’ situation or not. That makes it much easier emotionally, not only on the family, but also on the ER personnel.”

One aspect of hospice services that has always been part of the equation is counseling services for the family. “It is a very difficult time for the family, and they need to understand the process of dying,” Andrews said. “For instance, eating is important to life, but dying patients have no appetite. We prepare family members for these kinds of changes. We also follow the families for a year afterward.”

Because death is such an emotional ordeal for those left behind, counseling services have evolved over the years and go well beyond the funeral.

Noble Visiting Nurse and Hospice Services began by offering an Adult Bereavement Group that meets once a week. Andrews, who has been with Noble for six years, realized that there was a need for counseling beyond that. Herself a stepmother to three children who had lost their biological mother, she learned that “kids grieve differently than adults. And they don’t get over it, despite common belief.”

With this in mind, under her hospice program, she began the Teenage Bereavement Support Group at Westfield High School about a year ago. The need for such counseling proved so great that it has spread to three more programs in two middle schools in Westfield and Agawam.

Furthermore, Andrews hopes to expand this kind of specialty counseling to a parents group in the near future. “We are a community service agency, and this is one way we fill a community need,” she said.

Noble Visiting Nurse and Hospice Services, a subsidiary of Noble Health Systems (of which Noble Hospital is also a subsidiary), began 16 years ago with the home health care services. Hospice services were added in 1995.

Currently, there are seven nurses in the agency: five in home health care and two in the hospice program. There are 16 other full-time employees in various service and support areas, as well as a number of per diem specialists in physical therapy, occupational therapy, speech therapy, and aides.

While creating new programs to fill a demonstrated need is a proactive means of dealing with new trends, other trends are less controllable. Andrews sees two such tendencies, one in each of her agency’s programs.

“Patients in the visiting nurse program are gradually getting older. We see many strong 80- and 90-year-olds today. For some reason, though, we find we are offering hospice services to a growing number of young people, in their 20s and 30s, dying of cancer.”

The tone of her voice clearly indicated her concern when she said, “I’d love to find out why. It means we’re dealing with parents who are facing the loss of an adult child. That’s just not supposed to happen.” 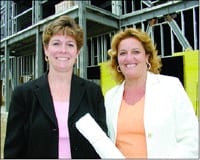 Problem Solved HRSI Takes The Risk Out Of Medical Billing