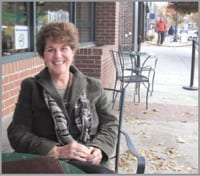 Betsey Yetter called it an epiphany.

That’s the word she summoned while discussing a soul-searching walk through her dining room after a lengthy phone call in 2004 with her West Coast-based son, who had just told her he was leaving his firm to go into business for himself.

It was a question without an easy resolution, and how she answered it would help lay the track for her own entrepreneurial gambit, called Loose Ends, which provides financial-organization services and other forms of assistance to the elderly.

Yetter’s 30-year career had been dotted with jobs in her family’s fourth-generation downtown Greenfield business and aided by a bachelor’s degree in Social Work from Syracuse and a MBA from the Isenberg School of Management at UMass. It also included work directing several for-profit and nonprofit agencies.

“I knew it was a really bad scene in Western Mass. for management positions, and as a child of the ’60s, I’d always wanted to join the Peace Corps,” she recalled, adding that she went to the organization’s website to do some research. “And there it was — they were actually looking for older MBAs; they were looking for me.”

Seven months later, she was sent to a rural area of the Ukraine, where she lived with two different non-English-speaking families for six months while learning the Russian language to help startup community-based businesses. While the conditions weren’t exactly conducive to growing businesses in small towns in the dissolved Soviet Union, two years of service in the Peace Corps helped hone her organizational skills. She helped local women learn how to fund-raise, and assisted them with securing a computer and needed accessories.

That life-changing experience, coupled with her past work in the administrative side of healthcare and her own personal experiences, paved the way for her to purchase Loose Ends from then-owner Audrey Child, who was looking for an exit strategy but also someone who would continue and build upon what she had started.

And Yetter has done just that.

Though the business is 15 years old, Yetter says that, in many ways, it is a startup, one she’s trying to take in new directions and into new geographic markets as it helps her meet what she calls her mission: to merge her love for social work with a much-needed and profitable service that impacts lives.

For this issue, HCN takes an in-depth look at an area of senior service that is often overlooked, but clearly plays an important role in one’s physical and mental well-being. Yetter has come full circle in her own life to offer her and her team’s much-needed skills to aid the elderly in organizing their personal financials and gain their home- or assisted-living-based independence with dignity.

Yetter didn’t know it at the time, but upon arriving home from the Ukraine, was in for what amounted to a different kind of culture shock.

“My re-entry in to this culture in 2006 was hard,” she remembers. “There was no infrastructure in those small Ukraine towns, and I literally had reverse culture shock; things had sped up so fast in just two years here.”

Examples included fully automated gas pumps or touch screens at supermarket check-out counters that offered swipe options that were only in symbols that left her feeling dense.

“I realized later on that what I experienced is that same feeling of helplessness that the elderly feel,” she explained. “I knew I should be familiar with the new automation, but I could see what it felt like to ’not get’ what was going on.”

Meanwhile, over the next several years, Yetter’s mother became ill; she went from being an active elder to someone confused simply by the mail. Yetter, who, like many others, found herself unemployed due to the Great Recession, had the time to help her mother with many of things she now found complicated.

Unemployment “turned out to be a wonderful thing because I was there to care for her and love her and she could trust me, but then it turned to her questions about paying charitable contributions, and she couldn’t remember if she had paid already,” said Yetter. “Or I’d explain that a letter from her insurance was just an explanation of benefits, only to learn that she’d paid it thinking it was a bill, so we had to get the money back.”

Such episodes are common among elderly adults, but often misunderstood or underestimated, she told HCN, adding that her desire to help her mother and others in that same situation coincided with Child’s efforts to find a buyer for Loose Ends.

It was a perfect match.

“I would only consider taking on this company because of who she was,” Yetter said of Child. “Her ethics and what this company was known for were very important to me; I saw that this really was the combination of everything I had been doing, and I finally realized I had to do this on my own.”

As she talked about her company and the services it provides, Yetter said that, most importantly, it delivers peace of mind to seniors — and their families.

“If you aren’t sure that you paid your mortgage or your doctor’s bill, and it’s causing you great stress and loss of sleep, are you healthy?” she asked rhetorically, add that the answer is an obvious ’no.’

Yetter’s question is an important one because, as she told HCN, caring for the elderly is usually thought of as helping with personal-hygiene care or home-duty care or getting people to and from a doctor’s visit. But while Yetter can refer other physical home-care services if they are needed, which many times they are, Loose Ends provides another, perhaps equally important service.

Consider the pile of confusing bills that grows ever-larger on the kitchen counter, or those repeated calls from charitable organizations that can be very persuasive and downright slick with marketing programs that cause an elderly person to question if they paid that charity already or not — or feel guilt that they should.

“These are the daily tasks that you and I simply do and mark it in our check registers, but the elderly need assistance with those simple, but very private and personal tasks that used to be routine to them, too,” said Yetter.

And another important point, she noted, is that, if an elder has an income level of below $41,000, these types of financial services are available for free through the local senior agencies — if they know enough to ask for help — but for all others, especially those with a bit higher incomes who are very proud of what they’ve accomplished in their lives, it’s hard for them to admit they now need help.

Loose Ends, said Yetter, is more of a handholding-service than a financial planner, offering a solution that is different for everyone, based on what they need.

The company offers a host of services, including help with organizing personal files, overseeing bills and tracking expenses, acting as an personal advocate and problem solver, looking out for fraud, preparing taxes, and maintaining Medicare and health records.

In that respect, it picks up where home health aides and care providers leave off, she said, adding that home care services have certified nursing assistants (CNA) or other skilled nursing staff, who tend to physical and medical needs, but are usually not qualified to handle banking statements or taxes.

“And they have no business even seeing that information,” said Yetter. “And that is one of the reasons that we find our services necessary — because it is so personal and requires select skills and confidentiality.”

Yetter said her first consultation is free to get a firm idea of what oversight is needed. But what is paramount at that first session is making sure that the potential client feels completely respected.

“I don’t want this to be a humbling experience for them,” said Yetter. “I tell them that they are my boss and their own personal business is their own, and I ask them, ’what do you need me to do for you?’”

Yetter and her team of three — two of whom were with Loose Ends before, plus a new hire — have years of experience in administration and finance, money management, personal archiving, and nursing, specifically for the elderly.

Having closed on the business deal in June, Yetter has already gained new clients, and her calendar is crowded with personal-outreach opportunities at health fairs, local banks, Rotary club meetings, and senior-center presentations. She’s also building relationships with area elder-care attorneys and financial planners for referrals.

Her goal from her home-based office is to grow the venture in Franklin, Hampshire, and Hampden counties, and also in Windham County, Vt.

While the company’s name sums up what it does for its clients, it also identifies what Yetter had in her professional life: loose ends.

She’s always had a desire to help people — that’s what brought her to the Peace Corps — as well as a love of social work. And later, she identified a pressing need within the community that she wanted to address. What she needed was a vehicle for bringing all of that together in a way that would, indeed, make an impact.

She’s tied up her own loose ends, and now she’s focused on helping others do the same.