Sheila Sullivan recently went shopping for a doll for a child’s birthday present.

“I was looking at where things were made, and I couldn’t find one that wasn’t made in China,” said Sullivan, a clinical dietitian at Baystate Medical Center. “Then I started thinking about what we’re putting in our mouths.”
Indeed, food products that hail from countries without strict food regulations are becoming harder to avoid. China alone is the third-ranking supplier of all food products in the U.S., said Caroline Smith DeWaal, director of Food Safety at the Center for Science in the Public Interest.

“I have heard from Chinese consumers and other independent sources that they have grave concerns about the safety of Chinese food sold domestically,” DeWaal told the U.S. Senate Commerce Committee this summer. “These concerns range from excess use of pesticides to high hormone levels in pork for human consumption, to intentional contamination of foods.”

“We don’t allow certain pesticides and herbicides to be used in the U.S.,” Sullivan noted, “but we export those to other countries, and it comes back in the food we import.”

The prospects are frightening to many. So, what can be done to ensure the food we eat is safe?

Eating locally produced food is one way. And eating very locally is the idea behind the 100-mile Diet, a concept introduced by two Canadians in 2004 that has become a popular, though challenging, culinary lifestyle for many in the U.S. and its northern neighbor.

Danger on a Dish

Freelance writer Alisa Smith and journalist James MacKinnon, a couple hailing from Vancouver, British Columbia, took facts such as these to heart and decided to launch an experiment — for one year, they would buy only food and beverages directly farmed or otherwise produced within 100 miles of their apartment. Their blog detailing their experiences took off, and their experiment became known as the 100-mile Diet. A book followed, and their Web site, www.100milediet.org, features plenty of testimonies from people who have tried the diet as well — as well as the pair’s own story.

“We walked into the diet cold turkey for a full year, and it was hard,” Smith said. “For example, we live on the West Coast, so it took us seven months to find a rogue local farmer who actually grows wheat. Meanwhile, we ate an unbelievable number of potatoes. Doing the diet the hard way taught us a lot about the current food system, but it isn’t for everybody. A more realistic approach is to plan a single, totally 100-mile meal with friends or family, and see where you want to go from there.

The pair said they never felt malnourished because they were eating only the freshest food that had traveled the shortest possible distances and was eaten or preserved at its seasonal peak. Most of it was organic, everything they ate was prepared from scratch, and nothing came out of a box. They warned, however, that their meals were repetitive — at first.

They told a similar story about the cost of food, saying the 100-mile Diet was expensive at first, until they became more familiar with what they were eating and buying.

“Most of us pay a big premium for out-of-season foods like cherries in winter or prepared foods like spaghetti sauce, usually with a long list of ingredients we might prefer not to have in our bodies,” she noted. “Eating locally, we bought fresh ingredients in season and direct from the farmer — and we were often buying bulk. We preserved enough food for the winter that we rarely had to buy groceries. Our bet? Most people eating a typical diet could save money by eating locally.”

Sullivan said the buy-local concept is worth considering for several reasons.

“I think it’s important to think along those lines, especially because we believe in supporting local farmers,” she said, noting that Baystate supports the efforts of Community Involved in Sustaining Agriculture (CISA), which promotes farming in Western Mass. “It goes back to eating seasonally, which dietitians have always encouraged people to do, because that’s how they’re going to get the freshest, closest food.”

That said, Smith and MacKinnon are quick to say the 100-mile diet, in its most radical form, is not easy, particularly at first. For instance, it took them a long time to find local food sources, make food from scratch, and can produce for the winter. “But it also raises interesting questions about how we’re spending our time,” Smith noted. “What if we spent more time on self-sufficiency and less time at the office?”

They also admit that every region has foods that are hard — perhaps impossible — to find.

“We lived on the 100-mile diet as an experiment,” she said. “Now we’re committed to eating locally, but certain long-distance favorites have made it back into the larder — like olives, and chocolate, and beer.”

And that philosophy — adhering to the basic tenets of the diet without necessarily following it to the letter — might be enough to get a head start on healthy eating, Sullivan said.

“Local food is fresher, and that’s why we encourage people to support the local farmers,” she said. “The farmers’ markets have made it easier to eat local food.”

A federal law was enacted in 2002 which would mandate all meat and vegetables to be labeled with their place of origin, but those rules have been pushed back into 2008, making it even more important for those cautious about food safety to look for local products. “This country is big enough to get most things you need most times of the year,” Sullivan said, but the delay in the mandatory labeling makes it difficult to even know if the food on a supermarket shelf is American in origin, let alone local.

And for people inclined to support a reduction in carbon emissions, the 100-mile Diet provides an opportunity to cut down on those food-travel miles, even if the food is American-made.

One thing’s for sure: the local-food movement is gaining steam. In Massachusetts, recent legislation encourages state facilities, such as schools and prisons, to purchase locally grown agricultural products if they cost no more than 10{06cf2b9696b159f874511d23dbc893eb1ac83014175ed30550cfff22781411e5} of the price of out-of-state fare.

“Schools and other state facilities buy enormous amounts of food every year,” said Annie Cheatham, executive director of CISA. “Parents have been complaining that their children are eating carrots from California when local growers can’t find a market for their vegetables. This law is an incentive for food-service directors to seek local food.”

“The eat-local movement is gaining some legs,” wrote Pioneer Valley-based blogger David Bollier at www.onthecommons.org. “There are now more than 4,000 farmers’ markets in the U.S., twice as many as 10 years ago. And the idea of eating a 100-mile diet is gaining in popularity.”

That doesn’t surprise Smith or MacKinnon, who see their concept as a fresher alternative to the drudgery of diets.

“The world of weight-loss diets is a weird and not-so-wonderful place,” Smith said. “Let’s put it this way: a local diet is likely to involve lots of fresh produce and homemade meals, and not a lot of junk food, processed fats, additives, and sugar. You’re also far more likely to know where your food came from, and what’s in it.”

Which is handy if you hear on the news that a crop of spinach in California has been contaminated.

“You know spinach is healthy, and you want to eat it, but you don’t want it from that farm in California,” Sullivan said. “And you don’t want to buy goods from China, where the few regulations they have are not followed and not enforceable. I think this diet at least brings those issues to the forefront and makes people think about what’s happening with their food supply.”

And if a local farmer harvests a little more revenue, then all the better. 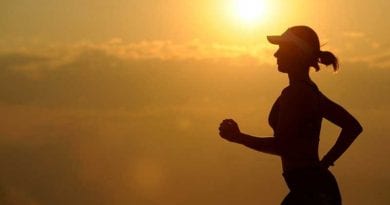 Running Found To Be Good For Health

‘Going Past Textbooks and into the Real World’