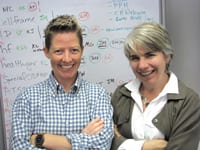 There’s a gap, Stacy Robison says, between the ability of the public to understand the copious amounts of health data they encounter, and how effectively that information is communicated.

But six years after she and Xanthi Scrimgeour launched CommunicateHealth in Northampton, that gap is narrowing — as quickly as their company is growing.

“We both come out of traditional public-health backgrounds,” Robison said of Scrimgeour, her partner in both life and business. “Xanthi was doing some health-education work for one of the bureaus for the state Department of Public Health. I did a lot of work at the federal level. I was doing some policy work around health literacy, looking at how people understand health information.”

On both levels, she said, “public health is historically underfunded. They don’t traditionally get cool design, creativity, technology.”

At the same time, data showed that people were increasingly struggling with health information at a time when society in general is shifting the burden, more than ever before, onto individuals to manage their health and seek relevant information.

“The other part of the equation is how poorly designed and poorly written information in public healthcare can be — it was a huge gap,” she told BusinessWest. “So that was really the vision for the company: let’s fill this gap. There was clearly a business case for this.”

So, in 2009, the two left their jobs and launched a startup business from their attic, with the goal of developing and rewriting health-information documents in a way that would be clear and engaging for all readers. By 2011, CommunicateHealth, as they called it, was approaching $1 million in revenue annually; it ended 2014 with just over $6 million. Meanwhile, a three-person operation six years ago now boasts a staff of 36 in Northampton and a second office in Rockville, Md. The Women Presidents’ Organization recently ranked the enterprise 44th on its list of fastest-growing women-owned companies.

That rapid success might surprise Robison and Scrimgeour, but only to a point. After all, they knew the vast health-information industry had a need for professionals who could clean up and redesign often-confusing communications.

“We consider ourselves a mission-based company,” Robison said. “We asked ourselves, ‘can we do this? Can we bring some creativity and new technology to a field that hasn’t had a chance to benefit from it? That’s really the mission — what can we do to make people’s lives better by simplifying the complexity of the public-health system? And, obviously, it was a good business model. We’ve done really well.”

Robison has been rewriting poorly presented health information since her previous career working with federal public-health agencies, and that was initially the bread and butter of CommunicateHealth. But as the startup has grown, it has also expanded its scope of services, moving from a subcontracting role to that of a prime contractor.

“We started doing content — focusing on how we can write this information more clearly. Since then, ‘plain language’ has become a buzzword in the federal arena. So we would do that and hand it off to a designer, and it was out of our our hands. But then we’d see it and say, ‘this is horrible.’ You can simplify the language, but if you put it in a 10-point Times New Roman font crammed onto a page with no pictures, you haven’t succeeded.”

So she and Scrimgeour introduced a design element into the firm, starting with one graphic designer and boasting four today, and will typically handle both content and design. Meanwhile, web-based health information was becoming more prominent — moving “beyond the brochure,” as Robison put it.

“It became more apparent that, if we’re going to do this well, we need to know how to make this interactive and work with technology, so we brought web developers onto the team,” she went on. “As we brought more and more resources in house, the business model expanded and became more full-service.”

With any project, Robison said, the team starts with determining who the audience is and how best to deliver the material, whether it’s pandemic information from the Centers for Disease Control and Prevention or childhood-obesity messages from the American Academy of Pediatrics, to name two past clients. And the process of determining the direction of a project is one that sets CommunicateHealth apart.

“One thing that makes us really different is our testing process. We involve the end users of our materials in the development process,” she said, using the example of a health-information app to explain. “Before we design a new app, we’ll go out and interview focus groups, ask what features people like, how they feel about this type of information. Once we get a prototype, we put it back in front of people. ‘Are we right on track? Would you use an app like this?’ Then we test it again, and ask, ‘did we accomplish what we wanted to accomplish?’ That process creates better products, but it also really connects us with people who will use them.”

“We run a huge gamut,” Robison said. “One project right now is for parents of young children who may be worried their kids have some kind of motor delay or developmental delay. We’re looking to create information for parents that’s supportive but not overwhelming, and also really accurate.”

Part of that project involves creating web-based GIF animations to demonstrate what it means when a toddler has a wobbly gait or some other movement impairment. “Parents reading this online can see this is what it looks like. We’re testing it with parents, all in hope of delivering a tool that’s supportive and easy and clear — nothing that’s too complex.”

The company will also be handling some communications around upcoming dietary guidelines for Americans, which are updated every five years. “We’ll be supporting that work, so we’re doing a lot of work right now with surveys, focus groups, and background work,” Robison said of the federal-level project.

Meanwhile, on the state level, she and Scrimgeour took on a project for the Mass. Department of Public Health, developing an app for individuals with communication challenges, from deafness to language barriers, to use to ‘talk’ to first responders in emergencies.

“That’s our favorite kind of project, because it was a blank slate — there was nothing like it,” Robison said. “So it allowed us to do our process, talk to people, figure out what’s going to work. We ended up with a simple app, all icon-based. That was a fun project.”

Robison, in fact, kept coming back to that back-and-forth dialogue with end users and its importance to every project, whether it’s taking an agency’s jargon-filled content and simplifying it for public consumption or creating something brand new, as in the case of the emergency app.

She also gets plenty of input from editorial boards and educational review boards, who help ensure accuracy and consistent messaging, but even then, research gathered from the public can sway content. “They’ll inevitably push back on everything, but we can show them the user testing — that we put [the original material] in front of people, and they didn’t understand it. We say, ‘you have a choice — and if you’re going to communicate, this is how you do it.’”

To private companies like health plans, clear communication can affect the bottom line as well, she added.

“Large health plans sometimes bring us on to improve communication with their members. We’ll take a look at a handful of their communications — transactional letters about co-payments, welcome guides, enrollment materials — and work with them to create a voice that’s more appropriate for consumers. We’ll test it to find out what’s working and what’s not.”

Overall, Robison said, it’s rewarding to be a business owner with such a wide array of projects, so no one gets stuck in a rut. “We’re a mission-based company. The people who come to work here, come to work because of the mission. They ultimately care about the end product; they want to deliver high-quality products.”

At the same time, she and Scrimgeour have also experimented with work-life arrangements inspired by Silicon Valley that fosters employee growth, autonomy, and satisfaction, including an unlimited time-off policy. Also, Friday afternoons are mandatory “creative time,” where everyone gathers to brainstorm ideas and sometimes help fellow employees stuck at a critical point in a project.

“It has been interesting for us to find those models,” Robison said. “How can we engage people and do things differently, treat our employees differently? There are a lot of traditional business models, but not a lot of people shaking it up.”

CommunicateHealth has risen to prominence at a time when healthcare in general is being shaken up by shifts in how care is delivered and paid for — and when consumers are increasingly anxious about the issues they’re dealing with, and just want some clear answers.

At the same time, Robison and Scrimgeour have become active supporters of the National Women’s Chamber of Commerce in its efforts to increase the share of federal contracts awarded to women-owned businesses. The goal? Five percent of the tens of billions of dollars available. “So, yeah,” Robison said, “we haven’t evened out that playing field yet.”

Still, the continued growth of CommunicateHealth serves as an inspiring example of two women who turned a passion into a business plan, which then became a local success story with a national reach.

“If you’d asked me years ago if I’d be a business owner, I’d have said never in a million years,” Robison said. “But it’s really nice for us to be this mission-based company and do well, which ultimately means we can do well for our employees and be a provider of jobs and training and good things like that. There are not a lot of models for this in public health, so to be able to do this is really gratifying.”

Changing the Landscape – More Men Are Embracing the Nursing Profession 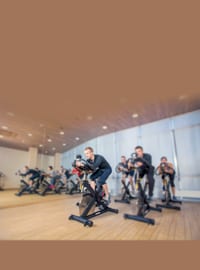 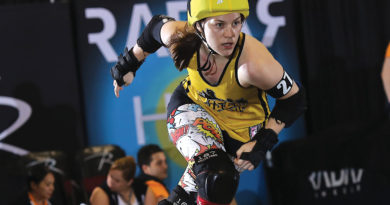