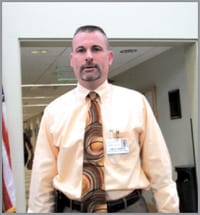 It’s all about making connections.

That’s how Carl Cameron, director of Information Technology at Holyoke Medical Center, characterized the hospital’s recent advancements in electronic medical records (EMRs) and digital information sharing, all of which aim to keep patients healthier and out of the hospital.

To do so, HMC has contracted with a service called eClinicalWorks, which makes it easy to share patient information quickly between primary-care providers and the hospital — which is particularly important when patients show up at the emergency room.

“We host the application here in the hospital, and we provide all the support for any community physicians who sign up for our model,” a number that totals almost 70 so far, Cameron said. “We’ve worked with eClinicalWorks to get the doctors not only using the scheduling piece and the billing piece of it, but also the electronic records piece. Many doctors in the community would have had a hard time doing that on their own.”

By creating a ’health exchange,’ he explained, the hospital reduces the chance of diagnosis or treatment error by making information about a patient’s last primary-care visit, current medications, and the like immediately available at the hospital. “It’s pretty advanced in terms of being able to share patient information between providers.”

In addition, Cameron explained, “over the next couple months, we’ll be turning on our patient portal, which allows patients to access their lab results and any information from their last stay at the hospital or visit to the emergency room.”

The state has mandated that hospitals and doctors use EMR by 2015 — and computerized physician order entry (CPOE) by 2012 — and HMC has been moving aggressively on many fronts for several years now, aiming to stay ahead of the curve in this complex field.

First, it fully implemented CPOE in 2009, a full three years ahead of the state requirement. CPOE allows doctors to directly enter orders into a computer, not only reducing errors by eliminating the sometimes-hard-to-read handwritten orders, but also allowing the data entered to be presented in ways that help physicians and other staff make better clinical decisions.

Then, last year, HMC announced that more than 50 doctors among the hospital’s physician population had begun entering exam rooms with a computer tablet in hand, switching from paper chart entry to entering patient history, providing referrals, and ordering prescriptions through the digital medium.

“This system basically streamlines everything that we do,” said Dominika Podolska-Blair, office manager of Western Mass. Pediatric Associates, which neighbors the hospital. “Paper charts could be misfiled or sitting on a doctor’s desk with lab results. Now everything is in the same place and easily accessible.”

In addition, scheduling and billing is computerized, and it’s easier to track regular no-shows and patients who’ll require longer visits, so office staff can better schedule doctors’ time. Although not every doctor is comfortable with the move away from paper, many agree with Podolska-Blair that it streamlines many processes. Even so, Cameron said, patient safety and improved quality of care remain the most important elements of the new protocol.

“The goal is that everyone is working together for patient safety with more accurate records, information being updated in real time, and faster and easier communication amongst everyone involved in a patient’s care,” he said. “It is confidential, and helps us move toward the national health care exchange system — to provide better continuity of care, faster and more streamlined care overall.”

At a time when hospitals are ever-more vigilant about reducing medical errors, Cameron said, it just makes sense to help all parties be better connected and make information sharing easier.

“That’s really been the goal over the last year: how do we improve patient care by extending the continuity of care between the patient, hospital, and primary-care provider — and, ultimately, the nursing home as we expand out further?”

To do that, proponents of EMR know they’re demanding a shift in the way physicians treat patients — one that many doctors simply aren’t comfortable with yet.

“So we’re working with them on techniques — how to talk to patients and also look up their record,” he continued. “That’s something physicians do in different ways, and it’s a challenge. There’s a challenge to make this cost-effective and affordable, so we work with [practices] to improve work flow and make it more efficient, but ultimately it’s about better documentation and better sharing of information with other providers in the community who are involved in that patient’s care.”

The state is asking more from hospitals in the public-health realm too, Cameron said.

“We’re required to do more public-health reporting, such as how many diabetics there are in the community, and are they following their treatment patterns? Are they making their follow-up visits to their primary-care providers?” he explained, adding that all these efforts are part of a move toward the accountable-care model, in which several providers in the community take joint responsibility for a patient’s long-term care, rather than just treating — and being paid for — each health event individually.

“With this concept of the patient-centered medical home,” he told HCN, “the idea is to keep them out of the hospital, and if they do come in, make sure they’re not readmitted.”

That process begins with strong communication, and on that front, Holyoke Medical Center continues to be a leader.

Melin Joins Board of Regional Chamber

Nothing Halfway – 50/50 Fitness & Nutrition Is Passionate About Members’ Success