He was referring to the projected deficits in the state’s Uncompensated Care Pool, which are expected to skyrocket beginning next spring, when about 55,000 members of MassHealth Basic are dropped from the Medicaid rolls.

Hollander, president of the Mass. Hospital Assoc. (MHA), said early estimates peg the shortfalls at $152 million this fiscal year, $265 million for fiscal ’04, and $306 million for FY ’05 — deficits that must be borne entirely by the state’s hospitals under the current pool formula.

That’s the bad news. The even worse news is that those numbers may be conservative because they do not factor in recent surges in the unemployed population, said Hollander.

The actual damage figures from the impact on the pool present one of the larger question marks hanging over the heads of hospital administrators as they turn the calendar to 2003. The shortfalls are expected to hurt every hospital in the Commonwealth, more than half of which finished in the red last fiscal year.

But there are other question marks, most of them related, directly or indirectly, to the state’s fiscal health, which Gov.elect Mitt Romney says hasn’t been this poor since the Great Depression. Indeed, with a projected $2 billion budget deficit facing lawmakers this spring, hospital administrators are wondering what the Legislature and the Romney administration may do to close that gap.

“We don’t know this governor, and we don’t know how he’ll interact with the Legislature,” said Cooley Dickinson Hospital President Craig Melin, who went to Harvard Business School with Romney and respects the state’s new chief executive. But, like others within the industry, he wonders out loud if the governor’s plans to run the state more like a business will make it even harder for hospitals to operate profitably.

“This will certainly be a very interesting time,” said Mark Tolosky, president and CEO of Baystate Health System and current chairman of the MHA, referring to the start of the Romney era. “His administration has a view of state government that is unique; they’re looking at this as they would a business turnaround. What that means for health care … we don’t know yet.”

Tolosky said several of Romney’s campaign statements and proposed changes require scrutiny. One proposal to require co-payments from some people currently on Medicaid may sound like a way to save the state some money, he explained, but it will likely prove to be a logistical nightmare for providers.

“You’d be asking hospitals to chase co-pays from some of the poorest people in the Commonwealth,” he explained. “That’s going to be extremely difficult, and it will only wind up costing hospitals in the end.”

State of the State

Tolosky said that more than a few people have joked that he picked a great year to be chairman of the MHA.

The sarcasm stems from the realization that, while the past several years have been fiscally challenging for the state’s hospitals, things likely will not get any better in 2003 — and they could get a lot worse.

Much of the attention statewide is being focused on the uncompensated care pool, which was created to pay for the care provided to those without insurance or any other means to pay for the services they receive. Three entities pay into the pool — hospitals, the state, and private payers — but the amounts for the latter two are fixed. That means that when the amount of free care provided swells, as it will when the MassHealth Basic members are dropped, then hospitals are “on the hook,” as Hollander puts it.

While the impact on each hospital will vary, said Tolosky, depending on the size of its Medicaid population and whether it pays into the pool or receives funds from it, every facility will feel the pinch in some way. And the additional hit comes at a time when the state’s hospitals are seeing an average operating margin of just 0.4{06cf2b9696b159f874511d23dbc893eb1ac83014175ed30550cfff22781411e5}.
“For most hospitals, there is little or no suplus to invest in people and programs to improve the quality of care provided,” said MHA spokesperson Dave Ball. “We’re seeing major losses by many hospitals; some are fighting just to stay alive.”

Tolosky said that if current projections for pool shortfalls are accurate, Baystate could be looking at a $9 million hit for fiscal year 2005. “That’s a big number,” he admitted, adding quickly that it is the smaller community hospitals, those with less flexibility in their budgets, that could be in greater peril. “If you take a community hospital that’s barely breaking even and throw another $500,000 hit at it, it’s a big problem.”

That’s why the MHA is lobbying the Legislature for both short- and long-term relief from the pool problem, he said. Short term, hospitals are asking for some help with the projected $170 million shortfall, which is more than double what the deficit was expected to be before the Medicaid rolls were cut. Long term, providers are seeking a restructuring of the pool formula, one that more evenly disburses the burden.

“It’s not fair that hospitals are the only party left vulnerable when there are pool shortfalls,” he said. “By giving hospitals the burden, the state is taking important health care resources right out of our communities. The Commonwealth has a problem, but not-for-profit hospitals are being asked to bail it out.”

The approaching tidal wave from the pool is but one example of how well-intentioned legislators trying to solve their fiscal problems shift the burden to providers, said Melin, who told The Healthcare News that he hopes elected officials don’t repeat that mistake in the year ahead.

He said one Romney proposal to place all state employees in one insurance plan to achieve greater buying power — and thus a lower rate — could also have a negative impact on hospitals and other providers. The state will certainly save money under such a scenario, but the payers will have to recover those lower rates somehow, and it will likely be through lower reimbursements to the providers. As a result, the state will effectively increase the population of people for which providers are not adequately compensated for the care they provide.

Those negotiated lower prices would be passed on to providers,” said Melin. “Thus, the state will take another patient population and reduce provider payments for it. The state will save some money, but the problem will passed to the hospitals — again.”

CDH is in a very unique situation, said Melin, in that it is one of only six hospitals across the Commonwealth that have finished in the black the past four years. In fact, it has had positive operating margins for the past 11 years. And it has taken those supluses and invested them in personnel and programs to improve patient care.

The hospital has added 68 clinical positions in the past year and has also invested in new technology to deliver care more efficiently and cost-effectively. Those investments will help the hospital increase market share and more easily absorb what Melin projects will be a $2 million hit from the pool shortfall in FY 2004. But most other hospitals simply aren’t that fortunate, he said.

“We’re no longer in a turn-around mode,” he said, “We’re stable and moving forward. But most hospitals are simply not in a position to do that.”

Given the state’s precarious fiscal health, hospital administrators would be wise to keep their expectations realistic for the year ahead, said Tolosky, who believes that significant help, in the form of changes to the pool formula or hikes in Medicaid reimbursements, is not likely.

“As providers, we have to be realistic, hold our own, hang in there, and try to position ourselves so that when things turn around we’ll be in a good position,” he said.
But as the challenges mount, hanging in there becomes increasingly difficult, and the outlook for 2003 is anything but bright. 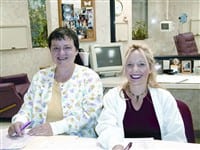