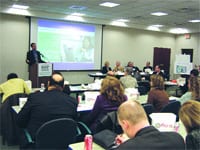 Peter Straley, CEO of Health New England, has a new role to play as part of what he calls a “traveling road show.”

That’s the nickname he’s given to the series of educational seminars on which he and other health plan and health care professionals have embarked recently, in order to raise awareness about rising health care costs, why they’re soaring, and what the Commonwealth can do to stem the tide.

The programs are also one initiative of the Coalition for Affordable Health Care, an organization made up of employers, individuals, health insurers, and other relevant entities that have formed a partnership to promote new measures that could ensure greater health care affordability in Massachusetts.

The road show, which is slated to appear in Worcester next month as well as a number of locales statewide as the year goes on, stopped in Springfield in February, focusing on breaking down the costs of health care and why and how they’ve risen over the past three decades.

Straley said that, while driving costs down has always been a major topic for discussion in his industry, the causes of the increases are often dwarfed by their effects, and therefore not analyzed within the marketplace at large to any effective degree.

“I’ve been in this business for 20 years, and health care costs have always been a topic,” he said. “We know they’re big, but how big? And what are they made up of?”

Straley said that in the early 1980s, out-of-pocket spending per person on health care in Massachusetts amounted to approximately $1,553 annually, while today that figure is nearing the $10,000 mark, at $9,662.

But to better illustrate what’s driving that increase, Straley noted that few people would elect to return to 1980 prices if it meant a return to 1980 levels of care.

“It’s important to look at what’s happened during this period; a lot has happened in 25 years,” he said. “If we look at care across the nation, Massachusetts has consistently set the standard. We are accustomed to quality.”

Straley added that technology plays a major role in rising costs across the board.

“New technology accounts for half of the overall increases to health care costs. Usually, new technology is added on to existing abilities, instead of acting as a replacement.”

Regardless of where the money goes, though, Straley added that the burden is still becoming insurmountable for many.

“For employers in particular, it’s becoming too expensive,” he said, noting that, to combat these costs, the coalition and the Mass. Assoc. of Health Plans have taken a varied approach deliberately, in order to address myriad issues. “The most important message we can send is that in order to gain real traction, there is no one silver bullet.”

The coalition’s appearances across the state are one way to raise awareness, as are more formal public hearings on cost drivers, a second aspect of the proposal set forth in conjunction with the MAHP. These hearings would require that health plans with more than 10,000 insured members in Massachusetts participate annually to weigh in on health care costs.

As part of the hearing process, health plans would be required to outline the factors contributing to any changes in premiums, including their projected medical expenses due to provider reimbursement rates, patient utilization, administrative costs, capital investments, and efforts to reduce the rate of growth.

In addition, MAHP-member health plans also began voluntarily disclosing financial data in a ‘consumer-friendly format’ in December, including total revenues, administrative costs and surpluses, and reserve levels, along with what they pay for medical costs for their insured members. The MAHP is also urging hospitals to initiate similar disclosures of public data.

Third, a 17-point legislative package titled an Act to Reduce Health Care Cost and Promote High Quality Health Care, also penned by the Mass. Assoc. of Health Plans, is aimed at protecting employers and consumers against the cost of claims and improving health care quality. The proposal has also been positioned by the coalition as a means to save the Commonwealth billions of dollars, if enacted by the state legislature.

Among these suggestions are:

“It’s a fact that individuals pay much more out of pocket than we used to,” said Straley. “Armed with that information, we can devise ways to bend that curve.”

That, he concluded, is why he calls the consumer forum series of which he’s a part a traveling road show. It may sound folksy, but that’s exactly the tone the coalition is hoping to set.

“Public forums find solutions,” he said. “The power rests with the residents — we need their input. And they are not to be underestimated.”

Lessons from the #MeToo Wave – There Are Many, for Employers and Employees Alike

Is The Life Estate Secure? Just When You Thought Your House Was Secure … The State Goes After It