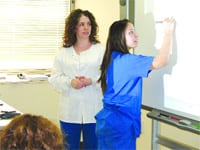 Kevin McCaskill knows that the long-term economic health of Springfield depends, at least in part, on keeping homegrown talent in the city. And when it comes to health care, one of the region’s largest-employing industries, it doesn’t hurt to start young.

“If students are working toward health careers, why not get them interested in staying home and becoming taxpaying citizens here?” asked McCaskill, principal of Putnam Vocational High School. “That would just help the local economy.”

It would also help students, many of them economically disadvantaged, to give them the skills they need to succeed in health care from an early age. From those two goals, a partnership was born two years ago between the city’s schools and its largest employer, Baystate Health.

“Baystate has historically had a relationship with Springfield’s public schools, but it was typically a series of one-time events, someone going and doing some outreach — telling them, ‘I am a respiratory therapist,’ that kind of approach,” said Peter Blain, community health planning consultant for the health system.

That model began to shift about three years ago following a conversation between Baystate President and CEO Mark Tolosky and Dr. Joseph Burke, the city’s superintendent of schools, in which they discussed the complementary needs of the two entities.

“Obviously, the schools would like more support to make sure students have opportunities to pursue health care careers, and the hospital always needs more workforce,” Blain explained. “There was already a nice connection there, and they wanted to expand that on a more continuous basis, to develop a pathway of opportunities.”

That pathway became known as the Baystate Springfield Educational Partner-ship, and it’s something that the health system clearly values, as evidenced by the five-year, $3 million investment Baystate has made to supply staffing and resources for the program.

“This isn’t altruism,” Blain said. “Both sides are able to identify a strong purpose for this. Baystate has need of a workforce, and the school system needs support in preparing its students for the future. It’s a good situation for everyone.”

The majority of the annual $600,000 budget covers the college- and career-prep offerings for area high-school students, some conducted in the classroom and others at the High Street Health Center, the partnership’s headquarters adjacent to Putnam.

With components including job shadowing, mentoring, and internships, the idea is to prepare students for either a college education or further training at Baystate upon graduating from high school.

But partnership coordinators are also thinking young, creating a mentor-buddy program for elementary students in conjunction with Big Brothers Big Sisters, and developing career exploration programs for middle-schoolers, along with after-school programs in math and science — in effect, giving students an early leg up on two academic areas critical to health careers.

For example, in conjunction with Baystate, Chestnut Middle School has developed a science workshop series to accompany its unit on the human body. The three-month program explains each system of the body and applies that knowledge to the sort of work students might someday undertake as health care professionals.

“It’s not enough to have just the career pathway,” Blain said. “You have to have an educational pipeline that complements it. Say a student wants to be a nurse but isn’t taking the necessary courses. Now, we’ve developed a program that begins in elementary school and transitions them past high school.”

Juliana Ferrera embodies one example of how the partnership benefits its two constituencies; she’s a nurse in Baystate’s surgical trauma unit, and also an Allied Health instructor at Putnam, where she teaches her eleventh-grade students the skills they need to pass the certified nursing assistant (CNA) test.

“We’ve always had a nursing assistant program here,” she told The Healthcare News, “but now, I think they get so much more hands-on training. They had nurses teaching the program before, but they had left the practice to become teachers. I think it helps to have nurse in the classroom who is active in the field. It helps them to stay current.”

Ferrera also provides opportunities for students to shadow her on the job during shifts at Baystate, which adds yet another educational dimension. “They see me working, not just talking about the things I do,” she said. “They get to see me in action.”

Blain noted that, because hospitals operate around the clock every day, there’s no shortage of after-school and weekend shifts available to students in a variety of fields, from nursing to surgical assisting.

“The expertise that Baystate offers our students has been phenomenal,” McCaskill said. “They’re visible here, and they’re more than willing to share their expertise with our students who have an interest in the allied health fields.”

Like Ferrera, McCaskill admitted that Putnam’s previous model of learning health careers was lacking in both variety and immediacy.

“It was a much narrower focus with simply the CNA programs, but now we’ve been able to expand into other programs,” he said. “This has been a tremendous opportunity for us.”

Clearly, this is a program that will bear fruit over time, as students become interested in health careers, attend college, and remain in the region as medical professionals. But Michelle Sherlin, a registered nurse and workforce development specialist for the partnership, said positive results can already be identified.

As for last year’s graduates, Sherlin beamed when she mentioned that many of them are first-generation college students in their families, and have the sort of regional roots that could lead them to seek employment one day in Western Mass., a key concern for Baystate and other health care organizations.

“A lot of my students are dealing with poverty. Some are pregnant or have children, and still they’re moving forward,” Ferrera said. “At one point, their choices might have seemed like dead ends. Now, they’re not letting their circumstances hold them back.”

Instead, with the help of an ambitious partnership, they’re creating a whole new set of circumstances — one that could help build Springfield’s next generation in health care. 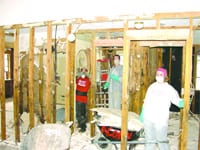