When Dr. Ronald Pike sees the effect of financial stress on hospitals across Massachusetts — leading to closings in the past and new threats of more closings — it just reinforces in his mind the role AdCare Hospital plays.

After all, it was a round of hospital closings 20 years ago that led AdCare in 1984 to change from an alcohol treatment center to a full-scale substance abuse hospital. Today, it’s the largest such independent system in New England, with clinics across Eastern Mass., one in Rhode Island, and one planned for Springfield.

“We believe in what were doing, and we’re sticking to it no matter what happens,” Pike said — and, at a time when the state’s budget crisis is causing unprecedented strain on full-service hospitals, that means preparing to deal with an increase in the number of patients referred to AdCare.

While experts often point out that substance abuse problems spike during rocky economic times, Pike said the more important trend is that heroin and other, so-called ‘designer’ drugs are cheaper and more plentiful than ever — and, no matter which way the economy blows, substance abuse has been on a steady rise for decades, with no end in sight.

As he told The Healthcare News, it’s a sobering thought, but one that adds force to the hospital’s mission and broadening reach.

AdCare Hospital didn’t have that name when it was launched in 1975 in Worcester. The original name was Doctors’ Hospital, but when AdCare bought it out in 1986, the name on the door changed — but not the mission.

Services are divided into three areas, covering both inpatient and outpatient care. First is the inpatient detoxification and rehabilitation focus, which includes individual and group counseling, as well as education groups. Physicians monitor patients for depression, anxiety, and anything that might trigger a relapse. Patients are also introduced to self-help and psychotherapy resources.

“Usually inpatients are those who have secondary diagnoses, severe psychiatric problems, or are unable to do detox as outpatients. They might be suicidal or need to have a safe environment,” Pike said.

“When they’re in the inpatient program, it’s really intensive, 24-hour management with nursing care,” he added. “Once they’re stabilized medically and psychologically, they can go into the outpatient phase of treatment.”

That takes several forms, the most intensive being a six-hour day program, which generally lasts one to two weeks, with patients coming every day or every other day. The day includes group counseling and an individual session with a counselor, who helps the patient identify and handle the stresses that can cause relapses.

A less-intensive night program runs three hours a session, three evenings a week, and is targeted for working people who can’t make the time commitment during the day. Again, coping skills and relapse prevention are key elements. There are other, specially targeted outpatient groups as well, such as an adolescent group.

Although AdCare still has only the Worcester acute-care hospital, outpatient clinics have been established in Worcester, Boston, North Dartmouth, and Warwick, R.I., all staffed by licensed clinical social workers. Springfield is on the drawing board, with a clinic soon to be created to serve Western Mass. Not that AdCare doesn’t already do that — only about 40{06cf2b9696b159f874511d23dbc893eb1ac83014175ed30550cfff22781411e5} of its patients hail from around Worcester; the rest are referred from around New England, including Hampden County.

Even the acute-care hospital, which now has a capacity of 98 patients, will soon expand, Pike said, further reflecting the growing need for treatment services.

As far as substance-abuse trends go, Pike said that, at one time, national economic fortunes had a greater impact on abuse rates than they do now. Alcoholism is as prevalent now as it ever was, but drug abuse rates are being partly driven by something different — the easy, cheap availability of certain substances.

“We’re finding that people are using heroin at younger ages because it’s so cheap,” Pike said. Oxycontin has become a trendy drug, but it’s more expensive than heroin, so users are actually transferring in many cases from Oxycontin to heroin, “which is almost ridiculous, when you think about it,” he said. AdCare is also as likely to see Xanax and Clonidine addictions as those for cocaine and heroin.

The other change in recent years that has become a common lament of drug and alcohol treatment centers is that patients must end their inpatient phases much sooner than before.

“When we opened up, we could keep them in the hospital for 21 days, as could all treatment centers,” Pike said. “Then, all of a sudden, insurance companies said, ‘this is much too expensive.’ Now we have 10 days in which to get the detox and rehab done and stabilize the patient for their next step. It’s a lot of brief interventions, brief counseling sessions, and putting out the next fire.”

These days, the biggest fire is one enveloping all health care facilities — declining Medicaid reimbursement rates and other budgetary strains. To hospitals that have as their mission to care for everyone who needs it, that can be a struggle, especially with the number of ininsured residents soaring across the Commonwealth. The facility has contracts with every managed care company — “if not at the rates we’d like,” Pike said — but not everyone is covered.

Pike pointed out AdCare’s slogan — “we care” — and said it’s more than a couple of words. “We do take in people who can’t pay,” he said. “Not a lot of them; we’d go broke if we did. But we believe in what we do.”

Substance abuse is a problem that’s only getting bigger. AdCare, with its consistent growth that will soon extend its presence to Springfield, has responded in kind. After all, Pike said, no matter how the state budget impacts health care providers, the needs of their patients aren’t going away. 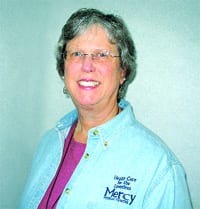 ‘Health Care for the Homeless’ Nurse Practitioner Is Honored