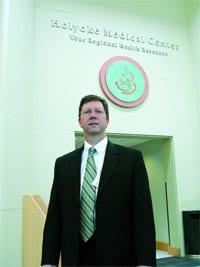 Simply being elderly and mobile can be a minefield. Staying at a hospital shouldn’t have to be.

But once in an inpatient bed, how secure is Grandma or Grandpa when it comes to walking, getting out of bed, or going to the bathroom? Is the hospital always the safe zone it should be?

The technical answer is no, of course; no hospital is perfect. But some area institutions have taken steps toward making their units safer for older adults who demonstrate a high risk of falling. The initiatives encompass a combination of elements, from staff education to environmental changes, to plain old paying attention and common sense. And those efforts are starting to bear fruit.

Donna Truesdell, director of Quality Improvement at Cooley Dickinson Hospital, said that facility’s falls-prevention program has reduced the incidence of falls from 9.7 per 1,000 patient days to 1.3 — that’s for the entire hospital population, although senior citizens are by far the most fall-prone group. CDH even recorded a couple of months in 2006 with zero falls.

“We’ve done some things to work on the problem,” she said, “but we also do a root-cause analysis on each and every fall, and we ask, ‘what could we have done?’”

This month, The Healthcare News examines the strikingly similar falls-prevention programs at CDH and at Holyoke Medical Center to determine why falls occur, and how some decidedly low-tech solutions are making a difference.

Truesdell noted that the technical definition of a fall, as recorded by national agencies, can be any kind of unplanned move from one plane to another — for instance, standing to sitting, or sitting to the floor.

“Someone can be walking with the patient, and the patient becomes very weak and is unable to keep walking,” she said. “If you ease them to the floor, even though it doesn’t seem like a fall, that’s considered a fall.”

Even with that strict definition in mind, however, “the number-one goal is no falls, and especially no falls with injuries,” Truesdell said. “That’s what we want to focus on; one fall is too many.”

The path to prevention begins when a patient is admitted, she explained. Nursing staff assess new patients for their fall risk, and reassess them every day. “That’s because people get new medications, their medical condition can change, older people can become confused — all these things can increase or decrease the fall risk.”

At a certain score, the patient is considered high-risk, and then the next phase — clearly identifying the at-risk patient — begins. The most obvious step is a graphic, depicting a falling star, that’s attached to the door to the patient’s room.

“That way, if anybody is walking by the room and sees the patient walking around or trying to get out of bed, they immediately know that person is at risk for falls, and they can go get a nurse,” she said. A sticker depicting the falling star graphic is also included in the patient’s file.

“Part of it is that you don’t want to declare to the public, necessarily, that the patient is at risk, and you don’t want to embarrass anyone,” Truesdell said. “That’s why we use the falling star as opposed to posting a particular word.”

“We use a scoring system for risk assessment upon admission or anytime there’s a change in the patient’s status that would warrant an increased level of risk,” said Jim Keefe, vice president for Inpatient Services. “When we identify a high risk for falls, we put red slipper socks on the patient.”

In the same way the CDH falling stars quickly identify a potentially dangerous situation, Holyoke employees are trained to recognize when someone trying to get out of a chair or bed is wearing red socks, and give assistance quickly.

Holyoke also uses colored flags posted to the foot of the patient’s bed. Green signifies a low fall risk; yellow is a low risk, but staff should still ask if the patient needs help getting up or walking; and a red flag indicates a patient who should not get up without assistance.

“We orient the family as well as visitors and other, ancillary departments, so everyone is on the same page,” Keefe said. “If someone sees those identifiers, they can assist or call for assistance when necessary.”

In addition, both Holyoke and Cooley Dickinson, like many hospitals, use small bed alarms that signal the floor’s nursing staff when an at-risk patient is trying to get out of bed, so they can respond and assist the patient before an accident occurs.

According to the CDC, the situation is even more precarious in nursing homes, where a typical facility reports between one and two falls per occupied bed annually, on average. In fact, the agency says as many as 75{06cf2b9696b159f874511d23dbc893eb1ac83014175ed30550cfff22781411e5} of people in nursing homes suffer at least one fall per year, twice the rate of older adults living in the community.

That’s not surprising considering that nursing home residents are by definition more frail than their independently living peers, and may often have problems with cognition or memory.

Unlike nursing home employees, however, who should know their residents’ capabilities, hospital employees must make quick, accurate determinations and then follow through with common-sense steps such as those outlined in the Holyoke and Cooley Dickinson programs.

“We have seen an improvement since we instituted the program last year,” Keefe said of Holyoke’s internal record-keeping. “It’s a multidisciplinary program that requires everyone to be on the same page. Sometimes that means re-education of staff.”

Apparently, it’s an easy sell in Massachusetts, where many hospitals have seen similar efforts meet with success. According to the most recent CDC statistics, the Bay State has the fifth-lowest incidence of fall-related injuries in men age 65 and older, trailing only Alaska, New Jersey, Alabama, and Louisiana. For senior women, Massachusetts ranks third, behind only New Jersey and Louisiana.

At Cooley Dickinson, which launched its safety effort in 2003, examining the cause of each fall has been crucial to preventing them.

“We looked at when falls were occurring, and many happened during shift changes, when all the staff were busy,” said Truesdell. “So we actually changed some staffing with our nursing assistants to better accommodate shift changes.”

And when studies uncovered a connection between certain medications and dizziness-related falls, physicians sought different drugs without that side effect.

Finally, after determining that many falls occurred while moving between the bed and the bathroom, CDH piloted a program called “comfort rounds” in which high-risk patients are visited every hour to ask if they need to use the toilet.

“We take this very seriously,” Truesdell said. “For every fall, we want to know how it happened so we can prevent it from happening again.”

That way, patients can get back to the task of healing without worrying about taking a painful turn for the worse.

Hospitals Need Room To Be Pepared For Tomorrow 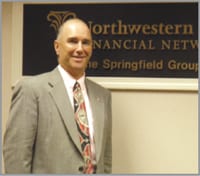 Dr. Martin Luber says young athletes are more at risk today because they tend to play multiple sports throughout the year without a break.