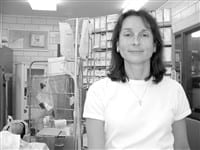 Joe Mathers has been making candles for almost a decade now.
His job at South Deerfield’s Yankee Candle complex is decent, he told The Healthcare News. The pay is not great, but OK, and the company treats him very well. But something is missing.

The work is quite repetitive, and it doesn’t involve people, said Mathers, 40, who explained that several members of his family have worked in health care and he has long had a desire to emulate them. After a few years of thinking about it, he’s doing it.

“This is something I always wanted to do,” he said, adding that at the moment he’s juggling his job, his responsibilities at home, and his schoolwork to realize the dream. “It’s not easy, but in the end, it will be worth it.”

If all goes well, Mathers will graduate next spring from Springfield Technical Community College’s Physical Therapist Assistant program and, in the process, join a growing number of people who have made health care their choice for a second career.

In many cases, these individuals are moving on to higher-paying jobs, but in some they are doing just the opposite. They’re trading a bigger paycheck for what Linda Desmarais calls ‘quality work.’

“These are areas where you’re working with people, where the rewards go well beyond money,” said Desmarais, chair of STCC’s Physical Therapist Assistant program. “There are many people who, after they’ve worked in a repetitive job for a number of years, decide they want something better, and since Sept. 11, there are more people making that choice.”

And 9/11 is just one of the motivations people have for making health care a second career, she said, noting that the softened economy and the demise of the tech sector are making jobs in health care more attractive, while shortages in many positions are making health opportunities more plentiful.

The Healthcare News talked this month with three people, all in their 40s, about their decisions to make health care their new career. We also talked with some administrators at STCC about why more people are making that choice today.

Joanne Lupi is another of those individuals who decided to pursue some quality work.

A long-time bartender and, later, a restaurant manager, she decided she wanted to work with people and make a difference in their lives, and not by making them a drink. But while her decision to enroll in the Physical Therapist Assistant program has some emotional flavor, it is also grounded in practical considerations.

“I was getting tired of the restaurant business,” she said, “and the benefits are really not very good, and I have retirement to think about. So I saw an opportunity, and I decided to go for it.”

That opportunity was a combination of the changing job market and a shift in her personal life — her son going off to college — that left her in a position where she had the time and the motivation to work nights and go to school during the day.

Like Mathers, she’s on track to graduate from STCC next spring and move quickly into what should be a receptive job market. Desmarais said there is strong demand for PTAs in the local market, and everyone in the Class of 2002 who wanted a job found one — and the same should hold true for next spring.

Desmarais said Mathers and Lupi, 47, are typical of many of the people who find themselves moving into health care careers later in life. Often underachievers in high school — for any number of reasons — many in this category took what was available in the job market. Now, they want something different, more fulfilling.
Kate Flynn, chair of the Surgical Technology Department at STCC, concurred. She said the allied health programs at the college have some direct-admission students — those who enroll right out of high school — but the majority are people have been working in other fields for many years and gravitated to health care for reasons that vary from a need to make more money to a lifelong desire to work with children.

There have always been people shifting into health care during middle age, she said, but today the numbers seem to be increasing. Part of the reason is opportunity, she said, noting a number of factors are contributing to shortages of personnel in several fields, while the aging of the nation’s population is creating greater need for individuals in several health professions.

But beyond the mere mathematics of supply and demand, there are the rewards of the work, said Desmarais. “We’ve seen a number of people in their 40s and 50s, people with bachelor’s degrees and master’s degrees, who wanted to go back and get an associate’s so they could be a physical therapist assistant, not a physical therapist, and work directly with people.”

She told The Healthcare News that the events of 9/11 have prompted more many people to give health or public service careers a harder look.

“Sept. 11 had a definite impact,” she explained. “We’ve seen enquiries about our programs go up across the board since 9/11. I think it’s because people are feeling a greater need to give something back and not merely earn a paycheck somewhere.”

Still another factor in the equation is the state of the economy, and particularly the sagging technology sector. “When technology flattens out, health care advances,” she said, adding that health careers that didn’t look so attractive when the tech sector was booming now have a new shine.

Despite all these factors, those who have considered health careers often need a spark — a change in their personal lives such as move or a divorce or a child going off to a college — to make their move, said Desmarais. But the common thread is moving into a field that involves working with people and in the field of medicine.

That was the case with Donna Muska, 43, of Wilbraham, who has worked for the past 20 years as a computer systems analyst, making good money in the process.
But she tired of the corporate life, and, when her family relocated from Florida to Wilbraham, she decided to change careers, not merely her mailing address. She is enrolled in STCC’s surgical technician’s program, a degree that prepares her to be an assistant in the operating room (see related story, page 23).

“I always had an interest in the medical field,” said Muska, who’s sister is a podiatric surgeon. “I’ve been thinking about this for the last 10 years or so, and I finally pulled the trigger last spring.”

She said she looked at a number of fields within health care, including nuclear medicine and ultrasound, but opted for surgical technician because that position will put her in the operating room.

“It sounded very exciting to me … the job involves working with surgeons, setting up the operating room, and assisting the surgeons with tools … it’s just perfect for me.”

When she graduates in two years, Muska shouldn’t have any trouble finding work. Surgical technicians are in short supply, primarily due to the job’s comparatively low pay and the fact that few are aware that the profession even exists. But Muska said it was personal rewards that drew her to the program, not the financial ones.

Mathers agreed. “I think I’d be doing this even if the job market wasn’t as promising as it is right now,” he told The Healthcare News. “I really want to get into health care and work with people.”

There are many people in that same category today, individuals who have decided to exchange work for quality work.

The Critical Work of Boards of Health