HOLYOKE — With U.S. Rep. John W. Olver leading a list of dignitaries that included a number of state and city officials, Holyoke Hospital kicked off its $11.1 million expansion and renovation program with a groundbreaking ceremony on Aug. 29.
”This marks one of the most significant expansion efforts in the hospital’s history,” said Holyoke Hospital President Hank J. Porten. “It’s going to truly benefit our patients and our community for future generations, and we are very much looking forward to getting everything underway.”

The project, aimed at improving patient care, is expected to take two years to complete. It will include the construction of new operating rooms and new endoscopy rooms in order to help the hospital meet rapid technological ad-vancements and the increasing demand for outpatient services. Other areas which will be included in the project include the Patient Registration Department; front lobby; recovery rooms; Laboratory, Car-diology, Anesthesia, and Medical Records departments, as well as the hospital’s gift and coffee shop.

Though it was held in a steady rain, the groundbreaking was well attended and featured brief speeches by numerous area notables, including Olver and Holyoke Mayor Michael Sullivan.

“We are living healthier and longer lives because of all of you who provide health care in our community,” said Olver as he scanned the crowd of hospital employees and physicians. “Holyoke Hospital must manage to upgrade its facilities.”

His comments were echoed by Joseph Wright, who, along with his wife, Angela, is co-chairing the $4 million “Yours For Life” campaign, which is raising funds for the hospital project.

“Despite what you see with this weather, today is a bright and shiny, glorious day,” said Wright, “not only in our hearts, but in the history of Holyoke Hospital.”
At press time, the fund-raising effort was already more than $1.5 million toward its goal.

Work on the project will be conducted in phases, so as to minimize inconvenience for the public.

Construction began earlier this month, and steel is expected to rise throughout the fall. The hospital has built a temporary front entrance near its Beech Street side.

hat entrance opened on Fri., Sept. 6, and will be used while the current front entrance is under construction.

“We’re very excited about the project, and feel it’s vital to bringing Holyoke Hospital into the future,” said Chief Operating Officer William Andrews. “We also realize that because much of the initial work will be taking place at our front entrance, there may be some minor inconveniences along the way. We ask for the public’s patience as we build a better hospital.”

Olver has been instrumental in the effort, leading the way in helping obtain $800,000 specifically for the Holyoke Hospital project through the FY02 Labor, Health and Human Services and Edu-cation Appropriations Bill.

Holyoke Hospital has undergone numerous expansions and renovations throughout its history, including an $11.2 million addition in 1987. Other recent major building projects on the hospital campus include the 1996 opening of the Valley Cancer Center and the 1999 opening of the new medical building/Women’s Center at 2 Hospital Drive.

Anyone interested in helping with the “Yours For Life” campaign is invited to call the hospital’s Development Department at (413) 534-2579. 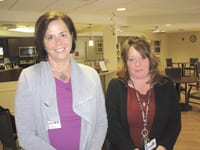