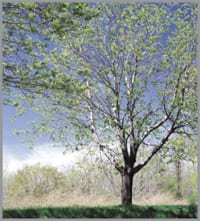 Pass the tissues — and the Benadryl.

As Dr. Thanai Pongdee, an allergist and immunologist in Texas, recently wrote, climate change may be responsible for the worsening of outdoor allergies.

“That’s not good news for the millions of people worldwide who suffer from seasonal allergic rhinitis (hay fever) and allergic asthma,” he noted on the Web site of the American Academy of Allergy, Asthma and Immunology.

“Recent studies suggest that increasing temperatures and carbon dioxide levels are causing spring seasons to arrive earlier,” he continued. “This means that pollination starts sooner. Tree pollen is the most common trigger for spring hay fever. Fall allergies, primarily caused by ragweed, are also getting worse because ragweed grows faster and produces more pollen per plant.”

Pollen are the small reproductive cells found in trees, weeds, plants, and grasses. Most trees release their pollen in the early spring, but early pollination poses a catch-22. While it’s a good idea to keep windows closed to keep pollen from drifting inside, those closed windows are also exacerbating issues from the mold, dirt, and bacteria being tracked inside from outdoors.

“Definitely we’ve seen that,” said Dr. Gopal Malladi, an otolaryngologist with the Keenan, Malladi & O’Neill, a regional practice that centers much of its work around allergies. “What normally happens during the winter is that we have a lot of snow, and it freezes and keeps bacteria and mold on the ground.

“Now it’s warm one day and cool another day,” he went on, and those allergens that normally stay dormant through the winter are being kicked up and brought into homes where the windows have been shut for months on end.

This is no secret to those who study climate and meteorology. According to the Weather Channel, a mild winter often causes trees to pollinate sooner, bringing an early start to the allergy season. Warmer-than-usual weather that continues in the spring also can increase pollen counts.

Meanwhile, the report notes, mild winters can also aggravate people allergic to mold. A combination of mild weather and rain can lead to an increase in mold-spore counts. Add the fact that sudden increases in temperature can trigger asthma attacks, and a warm winter becomes the perfect, well, storm for those who suffer from respiratory issues.

Nothing to Sneeze At

The composite picture is an uptick in allergy incidence and severity this winter, physicians say.

“With constant changes in the weather pattern and temperatures in the high 60s one day and in the 20s the next, I’m seeing a dramatic increase in the number of patients with sinus problems,” said Dr. Scott Burger, medical director and co-founder of Doctors Express.

But there is an upside to the unexpected weather, and that’s a mild flu season — so far, at least.

“The good news is that the warm temps have prevented a lot of us from hibernating indoors this winter season and catching the flu,” he explained. “When you get more fresh air instead of being cooped up inside around lots of other people, you are less likely to catch the flu.”

Burger, citing experts from the Center for Infectious Disease Research and Policy, stressed that the flu will still hit this year, only a bit later. “Flu season usually peaks sometime between January and March every year,” he said.  “We don’t expect this season to be any different. There’s still plenty of time for the flu to arrive.”

Meanwhile, allergy and asthma sufferers, who have always faced a tough stretch in the winter, continue to deal with the effects of this season’s inconsistency and mildness — a particular surprise after a very cold, stormy stretch last year.

“With windows closed and no circulation, we commonly see a lot of these asthma problems in addition to seasonal changes,” Malladi said. “Any changing weather just creates some of this bacteria and mold in the air sooner than it’s supposed to.”

He said an air purifier or ionizer is often a solid weapon in the battle against respiratory and nasal woes by keeping dust, mold, and other particulates to a minimum. Humidifiers are also helpful, especially for people who use forced hot air for heat, which dries out the tissues in the nose and throat and creates more opportunity to get sick.

“And, as much as people don’t like to crack the window, every so often you want to get fresh air into your house,” he said. He also cautioned against letting cats and dogs sleep in bed with their owners, as they’re tracking in irritants from outside on their paws and fur, making the bed itself a source of irritation.

Sinus of the Times

Winter is also prime time for sinus infections, Burger said, noting that an estimated 31 million adults in the U.S. are diagnosed with sinusitis each year. Symptoms include a runny nose with thick discharge, cough, and sometimes pain in the forehead, around and in between the eyes, and in the upper jaw, cheeks, and teeth.

To ward away germs that can lead to flu and other illnesses during the winter, Burger offered a few infection-prevention tips.

And, of course, employ some of the previous tips on keeping allergens out of the home during the winter. Even when — in fact, especially when — it doesn’t feel like winter.

Dr. Jill Montgomery and massage therapist Ann Wetherbee pose in the Perspectives physical training room, where cancer survivors can gain strength during and after treatment.