Understand the Difference, and Seek Help If It’s Needed

As Baby Boomers are getting older and representing the largest age group, the questions concerning dementia, as opposed to normal aging, continue to crop up in medical offices.

In the Greater Springfield area, 16.9% of residents over age 65 are living with a diagnosis of Alzheimer’s disease or other related dementia. The national average is 13.6%.

Someone develops Alzheimer’s disease every 68 seconds, with 5 million Americans affected, and the number expected to increase to 20 million by 2050.

“Someone develops Alzheimer’s disease every 68 seconds, with 5 million Americans affected, and the number expected to increase to 20 million by 2050.”

Given these numbers, it’s understandable when loved ones become concerned when they notice a family member having memory issues. It’s also understandable when people start to wonder themselves if they a problem. So how does one know if it’s dementia or simply normal aging?

Let’s discuss normal aging first, so you can have a sigh of relief. We all have occasional word-finding difficulties, but you can come up with the word given a bit of time. Not remembering someone’s name if you don’t see them often, or see them out of context, is normal. That is something we all do. Misplacing an item, but having the ability to retrace your steps and locate the item, is also normal. How many times do we all walk into a room and not remember why, then walk out and immediately remember, ‘oh yeah, I was getting the book I left on the couch’?

Rest assured, these are all normal signs of aging. Have any of you purchased ‘the tile’ so you can keep track of your keys, work keys, iPad, and whatever else you need? It can even help you find where you parked your car, which is extremely helpful in New York City, where there’s alternate parking every day.

What isn’t normal is having new problems finding words when speaking or writing (more than being on the tip of your tongue) and you just can’t bring them up. Or forgetting things more often, such as appointments, events, and your way around familiar places. Perhaps you can’t remember or keep up with conversations, books, movies, or newspapers. Are you stopping in the middle of the conversation because you can’t remember what was just said, or the thread of the conversation?

Also, are decisions harder to make? Is your judgment a bit skewed? Are friends and families asking if you are OK? Are you showing up to people’s homes or appointments on the wrong date? Is your mood and behavior a bit unstable or unpredictable? Are you withdrawing from social activities because you don’t want people to notice that you are having difficulty, but instead they notice you aren’t showing up?

These are symptoms of mild cognitive impairment, a precursor to a full dementia diagnosis.

There are more than 100 types of dementia. People are very reluctant to use the ‘A’ word. They quickly point out it’s not Alzheimer’s or they have just “a little bit of dementia.” The reality is that Alzheimer’s disease accounts for approximately 75% of all dementias. It could be vascular dementia, frontotemporal lobe dementia, Parkinson’s disease, or the 97 other types, and often they are concurrent. If you feel like this could be you, contact a neurologist, or a neuropsychologist, or the Alzheimer’s Assoc. at (413) 787-1113.

Today, there is no cure, but there are medications that can slow down the progression of the disease. Diet, exercise, genetics, and co-morbidities all play a part in the diagnosis, and it is said that those physiological changes could be forming in the brain 10 to 20 years before the actual symptoms start to show. There is no shame in asking for help if you feel you may have increased symptoms or you suspect them in a loved one.

On a side note, worth mentioning is that COVID-19 has wreaked havoc with the senior population, and the virus could be a new type of dementia. It has many side effects consistent with dementia if the virus has traveled to the brain. People are experiencing physiological and neurological changes within the brain, causing confusion, seizures, emotional dysregulation, and strokes that are having long-term effects.

Beth Cardillo, M.Ed., LSW, CDP is a licensed social worker, certified dementia practitioner, and executive director of Armbrook Village, and has worked in the dementia field for more than 20 years. Previous to working with dementia, she opened the nation’s first state-funded traumatic brain injury program in Westfield. She was named Western New England Social Worker of the Year in 2016, and was the 2019 Friends of the Alzheimer’s Assoc. Honoree of the Year; bcardillo@slr-usa.com; www.armbrookvillage.com 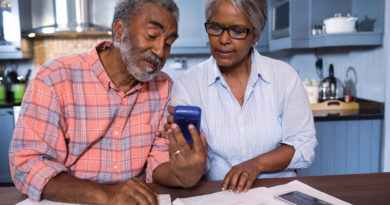