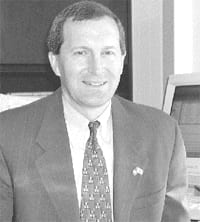 Complaints from health management organizations regarding the coverage mandates continually imposed on them by the state are nothing new.

However, they may have helped to bring about a change in the way those laws are established — though it remains to be seem whether the tide of mandates will be stemmed to any real degree.

Acting Gov. Jane Swift recently signed into law a provision requiring the state to determine the financial impact and medical efficacy of any mandate on health plans before it becomes law.

To do that, the state Division of Health Care Finance and Policy has been charged with setting up a system to review each mandate within 45 days of its legislative introduction and to issue a report detailing its cost and benefits. The Legislature will then consider the report before making a final vote on the measure.

Supporters of the measure, most prominently health plans and employer organizations, hope the law will force legislators to cut back on coverage mandates, particularly those that HMOs feel are passed on the strength of momentary popularity.

“Requiring a cost analysis and review of the efficacy makes sense,” said Dr. Marylou Buyse, president of the Mass. Assoc. of Health Plans (MAHP). “The new process will provide legislators with more information to understand the fiscal impact of new mandates, as well as whether a procedure or service has long-term health benefits. More information makes for better outcomes.”

This month, The Healthcare News examines the Bay State’s record when it comes to HMO regulation and why administrators of health plans see the new law as a step in the right direction.

The numbers speak for themselves: Massachusetts has saddled its health plans with 27 mandated benefit laws, the most of any state in the country.

As a sample of some of the latest measures, passed since 2000, the Bay State has mandated coverage for mental health, contraceptives, diabetes, early intervention, and speech therapy, among many others. Meanwhile, the 2001-02 legislative session saw 44 mandates proposed and five passed into law — about par for the course in Massachusetts.

Worried about rising costs all around when each mandate is enacted, the MAHP and its member health plans have been pushing for what the organization calls “a more rational approach to preserve quality, affordable health care.”

Furthermore, the organization noted, rising costs eventually get passed to employers and workers. And, according to a November 2001 study by the state Division of Health Care Finance and Policy, for every 10{06cf2b9696b159f874511d23dbc893eb1ac83014175ed30550cfff22781411e5} increase in the employee share of premiums, 65,000 Massachusetts residents would become uninsured.

Everyone drawing benefits from the health insurance industry, the MAHP claims, from employers to municipalities and the state, is facing double-digit premium increases because of the number of mandates enacted over the past several years.

Individual health plans, stung in recent years by a seemingly endless series of mandates, are cautious about the eventual impact of the new law, but agree that it’s a step in the right direction to hold down costs, said Peter Straley, president of Health New England.

“There’s a general feeling in the HMO industry that this is a positive step, in that it tries to align the cost and benefits or any individual mandate,” he said. “But, since we don’t know yet how it will be applied, it would be difficult to predict what the outcome will be.”

The concern, Straley said, is that the new assessment system will add another layer of administration without reducing the stream of questionable mandates — or, worse yet, burdening and slowing down the mandates that everyone, including HMOs, deem to have merit.

“Our hope is that what it will do is force us all to go through the discipline of examining something that, on the surface, looks good but that has some cost associated with it,” he said. “We should look at it in a dispassionate, objective way, then make the decision on whether or not to go ahead with it.

“If the system operates in that fashion, it will be a good thing,” he continued. “That’s my hope, that this will push us in a more responsible direction.”

The law has been placed in effect through 2004, but supporters, who range from HMOs themselves to groups such as Associated Industries of Mass. and the National Federation of Independent Businesses, already plan to lobby for an extension if the law meets their expectations over the next two years.

And, with $5.8 billion — about one-quarter of the entire state budget — earmarked for the Medicaid program alone, supporters say it’s in taxpayers’ interest to ensure that the state is getting the most for its money.

Already, a Medicaid cut in the FY 2003 budget affecting long-term unemployed residents threatens to take 50,000 people off the Medicaid rolls, and rising costs for private health plans could pose a problem for members down the line.

The measure, which originated in a proposal by the state’s Health Care Task Force in January, follows similar measures on the books in 12 other states, so Massachusetts isn’t breaking any new ground.

“The new review requirement,” Buyse said, “will give the Legislature a more complete picture of the effect new mandates have on the quality and affordability of health care when determining whether a mandated benefit is necessary.”

Necessity is often in the eyes of patients who will benefit most from health-plan mandates — and the lawmakers who want to meet their constituents’ needs. The path to proving that need now has one more hurdle to overcome.

The Reality of Physicians Inc.