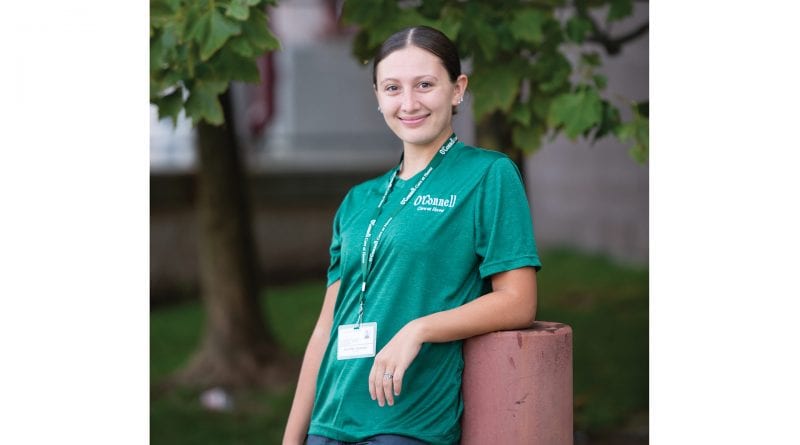 This College Student Stepped Up and Passed an Important Test

Jennifer Graham enrolled in the pre-medical sciences program — with a minor in psychology — at Bay Path University with the long-range goal of becoming a doctor.

But the events of the past seven months have changed her outlook — and her career pursuit — in a very meaningful way.

“I now want to go into nursing school,” she told BusinessWest. “Dealing with COVID as a whole and seeing what we’re going through as a country, I just want to pursue nursing and help people more. Doctors don’t get that one-on-one all the time, that patient contact, as much as a nurse does. After working with COVID and seeing what people really go through with sickness and even death, I want to be there — I want to be there to support these patients, help them out, and make them feel better as an individual with what they’re going through.”

What prompted this change? Some time on the front lines of the pandemic as a home health aide working for O’Connell Care at Home, a part-time job that became far more than that when she returned from a cruise — yes, a cruise — during spring break in mid-March.

Upon coming back to Western Mass. from that voyage to the Mediterranean, her job with O’Connell changed in a number of ways — everything from how care was provided in the home during a pandemic to where.

Indeed, in addition to going into the homes of the clients assigned to her, she was one of the first (and one of the few) to volunteer to provide care to the homeless at an outdoor COVID-19 triage facility established to care for potential positive cases among the homeless.

When asked why she signed on for this risky, month-long assignment in the middle of a pandemic, she replied simply, “there was an obvious need, and I just thought I could help — I thought I could do my part.”

“After working with COVID and seeing what people really go through with sickness and even death, I want to be there — I want to be there to support these patients, help them out, and make them feel better as an individual with what they’re going through.”

These comments from Michael Hynek, an HR generalist at O’Connell who nominated her to be a Healthcare Hero, echo that sentiment and put her work during the pandemic in its proper perspective.

“Having an aide like her, who is willing to accept any challenge, is vital when servicing our at-risk members in the community,” he wrote. “She makes everyone feel welcome and safe when administering care. Jennifer also enjoys the opportunity to learn about healthcare in many unique settings. Working outside of a hospital or facility can be very challenging, but she has embraced every challenge that has come her way.”

COVID-19 has provided her the opportunity to learn on many levels, and about many things. And it has also given her a new perspective on everything from the homeless population to her own career aspirations.

To tell this story properly, we need to go back to end of that spring-break cruise, which started and ended in Gotham. Suffice it to say the world, and Graham’s world, were much different places.

“While we were in the Bahamas, my phone was going off like crazy, and I was thinking, ‘look what we’re going home to,’” she recalled. “When we docked, New York was a complete ghost town; they took our temperatures and asked us a series of questions; if you had a fever, you had to stay on the cruise ship for two weeks. But no one had a fever.”

As for Bay Path, the campus was now closed, and it would not reopen for the balance of the spring semester. “There were no labs, no nothing; everything was remote.”

Then there was her day job, as she called it.

Looking for something that would provide both a paycheck and some rewarding work in what was becoming her chosen field, she became intrigued by the comments of some friends who worked at O’Connell’s who told her it was a great place to work. She applied late last fall, and started in December.

By the following March, she had settled in; she had a few clients assigned to her and also filled in when a colleague was out.

When she came back from vacation, that world changed as well. She was still seeing many of the same clients she did before COVID struck, but now, the work was different. It now entailed social distancing, mask wearing, and being extra diligent when it came to keeping the client and family members — and herself — safe.

“It was quite challenging at first — having to wear a mask all day was … different, and it was a new environment,” she recalled. “But after a little bit, you got used to it. And for the clients, it was difficult for them, because it was hard for them to understand what you were saying. I was thinking, ‘now we have to think differently and respond to them differently. I have to be much louder and slow my words; clients don’t like the mask.’

“Having an aide like her, who is willing to accept any challenge, is vital when servicing our at-risk members in the community.”

“I’ve been double-gloving,” she went on, referring to the practice of wearing two sets of gloves in the homes of those clients she has to help physically. “In some cases, they tell you not to double-glove, because it’s easier for your gloves to rip, but double-gloving for me has been a life saver.”

The bigger, even more significant change came with her decision to volunteer for work at the triage center created to care for the homeless population, work that became almost full-time as the spring semester ended and her schedule opened up.

“Anyone who had the virus or felt they had the virus came into these two large tents — they were essentially living there,” she explained, adding that individuals were tested on site and placed in two categories: PUI (patients under investigation), and the “COVID side,” where residents were housed in designated quarters based on whether they tested positive or negative.

Elaborating, she said there was an intake process, testing, and then the aides would bring them into a tent, make up a bed for them, get them something to eat, and help in any way they could. “If they needed anything, we were there for them.”

While a few people volunteered for work at the triage center, Hynek told BusinessWest, Graham’s commitment stood out.

“She really stepped up the plate when it came to transitioning away from the elderly care and into the homeless care and serving that vulnerable population,” he noted. “She took on a brand-new challenge, and I don’t think a lot of people would step up to the plate in that situation.”

As noted earlier, this work was a learning experience on many levels, and it also changed her perspective on the homeless population.

“This experience changed my mind on how I look at them,” she explained. “Being younger, I would look at a homeless person and say, ‘why don’t you just get a job?’ Working with them completely changed how I felt; I got to understand what it’s like for them — how much of a struggle it is for them on a daily basis.

Graham is back in school now, taking classes remotely while returning to the Bay Path campus for labs. She still works at O’Connell at a part-time basis, taking care of a few clients and double-gloving as always. The COVID-19 fight is far from over, but she has already absorbed a number of lessons that have helped her grow personally and professionally and given her that new perspective on what she wants to do with her life.

If this was a test — and she would say it has been, on a number of levels — then she has certainly aced it, becoming, in the process, one of the many Healthcare Heroes of 2020.