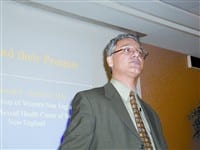 During a recent lecture on prostate health at Mercy Medical Center, one attendee was more interested in the bladder — specifically, a catchy television advertisement about it.

“In that commercial where they’ve ‘gotta go, gotta go,’” the man said, referring to a spot about urinary urgency, “it’s always a woman. Why is that?”

Other attendees chuckled and nodded their heads. And for Dr. Mohammad R. Mostafavi, the question wasn’t off-topic at all, but actually cut to the heart of the uncertainty men have when it comes to their health.

“Overactive bladder doesn’t get the attention it should in men,” said Mostafavi, co-director of the Sexual Health Center of Western New England, “because we tend to blame everything on the prostate.”

And at the heart of Mostafavi’s discussion with about 40 men — and a few women — was the notion that, with so many possible causes of urinary and sexual dysfunction, and so many treatment options for each condition, it can get confusing, especially for men, who are historically less willing than women to undergo regular health screenings and seek help when health problems arise.

But Mostafavi was just as adamant that men need to know what’s happening in their prostates and need to know the difference between prostate cancer, an enlarged prostate, and simple prostate irritation.

Yes, he said, sometimes that discomfort or urgency is a bladder problem — but many times, especially for senior citizens, it’s not — which is why prostate health should be on every older man’s radar.

Time to See a Doctor

And while BPH can be a quality-of-life issue, as well as carry other medical complications, prostate cancer is a more serious concern, afflicting some 2.8 million American men at any given time and causing more than 39,000 deaths per year — a figure not far from the more than 43,000 women who die annually from breast cancer, a condition that receives more media attention.

But even though prostate cancer is the most common type of cancer among older men — and even though the treatment options are varied and effective if it’s caught early — many men still don’t arrange for regular screenings, to their ultimate regret.

“When compared to women, we men don’t go to the doctor until it’s absolutely necessary,” Mostafavi said to many knowing nods. “We’re not proactive in doing what needs to be done to prevent certain conditions.”

That’s slowly changing, he said, and as a result of increased education and awareness among men, mortality from prostate cancer is on a slight decline. The Internet has been a plus in facilitating the availability of medical information, but the change still requires an attitude shift — and doctors are seeing just that.

And greater awareness leads to increased numbers of men being screened for prostate diseases. Currently, the medical standard is annual screening starting at age 50 — age 40 for certain high-risk groups, such as African-Americans or people with a family history of prostate cancer.

Mostafavi explained that the prostate’s one important role is to secrete a substance that liquefies semen, but once a man is older, the organ is more of a nuisance than anything — and can only cause problems, from the bladder obstruction and irritation issues associated with BPH to cancer itself. And these are problems that can often be solved by removal of the prostate.

So why is it such a complicated matter whether or not to do just that? The answer lies in the risks associated with surgery — and the range of non-surgical options now being undertaken.

To be sure, any surgical procedure performed on a senior citizen carries greater risks than those performed on younger men, from anesthetic complications to bleeding. In fact, Mostafavi says he has all surgical patients donate two pints of blood beforehand so it can be replaced if necessary.

Because of these risks, and because prostate cancer is typically not fatal for 15 or more years if it’s caught soon enough, doctors tend to recommend removal of the organ only in younger patients.

In some patients, doctors recommend ‘watchful waiting’ instead of aggressive treatment if certain criteria aren’t met — for example, if a cancer was identified during a biopsy but cannot be felt during a digital (finger) rectal exam, or it was found only in a small percentage of biopsy needle cores.

Measuring the level of prostate-specific antigen, or PSA, in the body is another means of testing the severity of the cancer. “But PSA is not an absolute number. It is not a perfect study,” said Mostafavi, who noted that the level can be elevated by an enlarged prostate, an infection, even sexual activity — which is why doctors ask for abstinence for two days prior to a PSA test.

Doing nothing about an aggressive cancer, however, could lead to the spread of the disease into the kidneys, bones, or other areas — and death. So, if treatment is called for, what can patients do? “Fortunately, there are options available today that were unheard of in the past,” Mostafavi said.

These include traditional radiation therapy as well as newer methods such as cryotherapy, which involves freezing the prostate to kill cancerous cells, and brachytherapy, wherein doctors implant between 70 and 130 radioactive seeds — actually pellets of iodine-125 — into the organ using a needle.

That’s a minimally invasive method of treating the disease, but when it comes to more serious surgery, doctors are, by and large, not yet relying on laparoscopic techniques — although the jury is still out.

“Laparoscopic prostatectomy is still in its evolution,” Mostafavi said, “but I believe it will someday be the standard of care. But that will take some time.”
One hurdle, he said, is the fact that the traditional surgical incision is about the same size that a series of laparoscopic incisions would be — as opposed to laparoscopic kidney surgery, which is far less invasive than traditional cutting. “The question has to be, what will benefit the patient?” he said. “As we learn more about laparoscopic prostatectomy, we will learn whether it will be the standard of care.”

Mostafavi concluded his lecture by stressing that he has little ego when it comes to diagnosing patients, and always encourages them to get second opinions. He also waits until the second visit to start wading deeply into treatment options.

“The first visit can be a shock,” he said. “They don’t remember anything.”

As technology advances, however, and as men increasingly seek advice on prostate health at earlier ages, those shocks are gradually being minimized, and men are living longer — and living well. 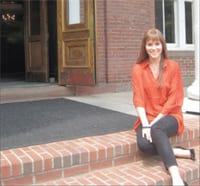