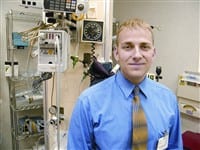 Jay Ober is expecting an invitation from the Japanese government soon to travel to that country and assist in the development of training programs for nurses and other health care professionals that utilize patient simulators.
A delegation from Japan recently visited Holyoke Hospital to learn about simulators firsthand from Ober, the recently named manager of the hospital’s Emergency Department, who is considered a pioneer in the use of the devices for nurse training and evaluation. The Japanese health officials liked what they saw, and plan to introduce simulators into their education programs. Ober’s not sure if he can squeeze a trip to Japan into an already packed schedule, but if he does not, he’ll still get more than his share of frequent-flyer miles in the months ahead.

Indeed, Ober has been traveling around the country the past several years touting the benefits of simulators, and he has recently given talks on the subject at Mass General, Johns Hopkins Medical Center, Newton-Wellesley Hospital, and other major teaching hospitals. And when he isn’t jetting off to lecture-circuit stops, he’s flying with the Air Force Reserve. He is the director of Air Crew Training and a flight nurse instructor at Westover Air Force Base. In that capacity, he makes several visits to Cuba, Puerto Rico, and other points on the compass for training exercises.

When he’s on the ground, Ober is working to create a new model for delivering care in the hospital’s ER. Based on a program now in use in Oakland, Calif., the new strategy — one that involves having a patient see a doctor much earlier in the ER experience — is one that he believes will cut down dramatically on wait times, while actually improving the care that patients receive.

If it sounds like the 31-year-old Ober has a lot on his plate, that’s because he does. And he likes it that way.

An energetic individual who describes himself alternately as a student, teacher, and motivator, Ober developed a passion for health care when he started working as an EMT while attending Springfield’s Central High School. He has gone on to receive an associate’s degree in Nursing from STCC, a bachelor’s in science in Nursing from UMass, and a master’s degree in science and Nurse Practitioner from Ball State University in Indiana. And he’s currently pursuing a doctoral degree from UMass Amherst and UMass Medical School, where his research will be concentrated on the use of medical simulation to reduce medical errors and improve patient safety.

He credits his mother with convincing him to go back to school to get his nursing degree in 1994. Since then, however, he says he’s been propelled by the desire to learn more about health care delivery and effect change in the system.
“I have two real missions,” he said. “I want to make simulators part of the education process at every hospital in the country, and I want to change the way we deliver care in the emergency room. And I think Holyoke Hospital is taking the lead in both areas. It’s an exciting time to be here.”
Ober talked with The Healthcare News recently about his twin goals, and about how he’s thoroughly enjoying a position in which he gets to learn and teach at the same time.

Ober’s new office at Holyoke Hospital is a narrow, windowless space now cluttered with procedural manuals and all manner of paperwork that has reached volumes he could not have imagined. Luckily, this isn’t where he actually works.

Instead, he spends a great deal of time in the ER — he adjusts his schedule so he can work with and evaluate all three shifts, and still does clinical work — and also in the converted third-floor patient room that has become home to the hospital’s adult patient simulator, as well as the technology needed to operate the equipment and evaluate those providing care to it.

And he also spends a good deal of time on the road lecturing on the virtues of simulation. He’s delivered more than 400 lectures to the medical community in his career — many on the subject of simulators — and has several more scheduled for the months ahead.

That’s quite a resume for a man who says he more or less stumbled into the health care field. Inspired by one of his high school teachers, he enrolled in an emergency training course and later took a job with Eastern Ambulance Service and then Charter Ambulance Service as an EMT. He also worked at that time as an emergency department technician at Mercy Medical Center.

Implored by his mother to go back to school, he did so in the early ’90s, enrolling in STCC’s Nursing program, from which he graduated in 1994. He then became a staff nurse in the ICU and CCU at Mercy, and later moved on to Baystate Medical Center, where he worked as a triage coordinator/charge nurse in both the Cardiac Intensive Care Unit and the Cardiac Surgical Intensive Care Unit.

Meanwhile, in his ‘spare’ time, he joined the Air Force Reserves, serving as flight nurse instructor, assistant chief of staff development, and director of Air crew training at Westover. He even found time to open to two coffee houses, which he ran successfully for several years before selling them to an investor.

“It was something I always wanted to do,” he said of his entrepreneurial venture. “It was fun, it was profitable, and I learned a lot about people and business.”
Over the course of his still-young career, Ober has blended learning with teaching, a pattern that continued when he joined Holyoke Hospital as educator for critical care and the emergency department, and also when he was named manager of the emergency department several months ago.

He told The Healthcare News that while he’s instructing and evaluating staff, he’s also learning from them — and working with them to improve the delivery of health care.

“The best of my job is the fact that I can be part of that team in the ER, still learn each time I come to work — and I do learn something from the doctors, the nurses, and the technicians every day — and then teach as well,” he said. “That’s the fun part.”

Ober first used simulators while at the School of Aerospace Medicine in San Antonio, Texas, where he took part in the Flight Nurse Training Program. Soon after coming to Holyoke Hospital in 2000 as an educator for personnel in critical care and the emergency department, Ober convinced hospital administrators of the need to use simulators as a way to train and evaluate nurses, but also to reduce medical errors.

The hospital remains one of only a handful of hospitals in the Northeast that have simulators — they are more commonly used at nursing schools and other educational facilities — and that is a statistic that Ober is determined to change.

Made by Laerdal Corp., the hospital’s computer-controlled adult simulator — known as SimMan — can replicate the characteristics and medical conditions of a human being, from a growling stomach to a heart attack. It can even be programmed to speak several different languages. Caregivers can use the equipment to simulate everything from a taking a pulse to administering medication to delivering CPR.

“There isn’t anything you can do for a human that you can’t do for a simulator; that’s what makes it such a useful teaching device, Ober explained. “And the magic of the simulation is that it can change at any time and it’s tailored to meet the student’s needs.”

In the short time that SimMan has been on the job at Holyoke, Ober says he has compiled data showing that the simulator has been effective in reducing medical errors and improving the overall quality of care delivered.

“The numbers are there,” he told The Healthcare News. “They show that, since we’ve started using the simulator, the numbers of errors are down. The data doesn’t lie.”

What’s more, simulators have proven effective in improving communication among the members of a team providing care and in building confidence in individual caregivers, said Ober, adding that nurses at Holyoke are now required to pass a competency exam on the simulator on an annual basis. Sessions are videotaped, and students are then debriefed on their performance.

Ober said his primary goal when lecturing at various hospitals is to showcase simulators as an instrument of learning.

“It’s not just having the device that’s important, but learning how to teach with it,” he said. “It replaces the PowerPoint and it replaces the pointer and the white board; it becomes a new and powerful tool.”

Ober sounds skeptical when he talks about the prospects of traveling to Japan and helping officials there with their simulation program. “It’s going to be tough to fit that in.”

But there will be plenty of other trips to make in his drive to make simulators part of the landscape in health care, in this country and abroad.
It’s part of his ongoing effort to continue teaching and learning, a pattern he doesn’t expect to end when he receives his Ph.D.

“Learning is something you continue for life,” he explained. “There are always new things to learn and then pass on to others. That’s what makes it fun.” 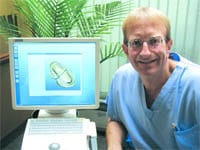