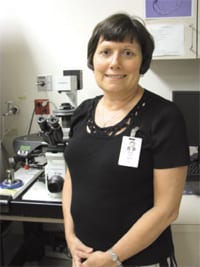 Dr. Cynthia Sites says there are many ways to chart the progression and multi-layered success of Baystate Reproductive Medicine.

There’s also a growing list of services — one that now includes everything from a donor-egg program to intracytoplasmic sperm injection, or ICSI, in which the sperm is injected directly into the egg — and documented progress with something known as single-embryo transfer. This is a process, a blend of science and art, according to Sites, whereby specialists can both improve the odds for fertilization, but limit the risk of multiple births (more on that later).

And then … there’s the IVF (in vitro fertilization) birthday party. Staged last year at the Museum of Springfield History, it marked the 25th anniversary of the program at Baystate, and, more poignantly, the birth of those children brought into the world through reproductive technology used at the center. Sites doesn’t have an official tally, but she believes that perhaps 300 of the 900 or so children born through the assistance of the program were in attendance with their parents.

“It was a reunion in many ways,” she said. “Patients, their children, nurses, even some former employees came back, and there was a shared sense of pride in all that we’ve accomplished and how far we’ve come over the years.”

Despite all these qualitative and quantitative measures, however, Sites believes Baystate Reproductive Medicine, the only facility of its kind in Western Mass., is still somewhat of an unknown quantity. Indeed, while the number of IVF births has grown each year, too many people are still unaware of the department and its broad range of services, she told HCN.

And that’s a problem, because there are statistics that show that infertility problems are diagnosed in perhaps one in 10 American couples (with many cases going untreated), and the center offers comprehensive, accessible, and affordable care to people in Western Mass. and beyond.

Thus, while it works to continually improve both its success rates for live births and the overall efficiency of the fertilization process — and there is a lot that goes into that phrase — BRM will also strive to tell its story better, said Sites.

“There are many people in the region who don’t know we exist,” she said. “And it’s one of our goals to let people know that they don’t have to go outside this area to get these kinds of services.”

For this issue, HCN takes an in-depth look at this emerging field of medicine, which Sites describes as “uniquely rewarding” for its ability to assist couples make the dream of parenthood become reality, and how its evolutionary process continues.

Sites remembers becoming fascinated by the story of the first IVF, or “test-tube” baby (Louise Brown) in England in 1978, as she was graduating from high school. So much so that she began to set her sights on a career in medicine, and, more specifically, the still-emerging surgical subspeciality known as reproductive endocrinology and infertility.

“I thought it was an incredible technology, which was still in its infancy then,” she recalled, laughing at her choice of words. “The technology wasn’t very good at that time, but there were a few successes in Great Britain and later in this country, and there has been remarkable progress since then.”

Sites attained an undergraduate degree in zoology at Ohio State University, and later attended medical school there. She completed her internship and residency in obstetrics and gynecology at Strong Memorial Hospital at the University of Rochester, and then completed a fellowship in reproductive endocrinology and infertility at the University of Cincinnati.

And while Sites has only been at Baystate since late 2009, following stints at University of Vermont (Fletcher Allen Health Care) and the University of Alabama Hospital, her career in this field and BRM cover pretty much the same time span, one that she described as a period of great progress in this continually evolving science.

“Technology has really progressed over the past 30 years — we can now treat a wider variety of couples,” she told HCN, adding that in the beginning, reproductive medicine was restricted mostly to dealing with the complications of blocked fallopian tubes, and was limited, in terms of overall success rates, by use of a single egg, rather than the multiple embryos that specialists can now work with.

Listing some of the recent advances, she cited everything from pre-implantation genetic diagnosis PGD, or embryo screening, which can help couples that are carriers of genetic conditions determine if a fertilized egg is affected with the illness, to intracytoplasmic sperm injection, or what she called the “ICSI technology,” which addresses male infertility.

As for PGD, Sites said this is a fairly recent development at Baystate that entails what amounts to a biopsy of an embryo.

“If couples are known to be carriers of a disorder such as cystic fibrosis, they could have a child that would have a 25{06cf2b9696b159f874511d23dbc893eb1ac83014175ed30550cfff22781411e5} chance of being affected,” she explained. “There’s now the ability to prevent that by biopsying early embryos and testing each one to see if they’re affected, and then putting back, through the IVF process, only those embryos that are not affected.”

As she talked about the array of services offered at BRM, Sites said they range from the simple to the complex, or “high tech,” as she called it, and include IVF, intrauterine insemination (IUI), infertility treatment, including ovulation induction, ICSI, assisted hatching, gestational carrier services, and PGD.

And while much of the work involves assistance to couples seeking treatment for infertility — with that term defined as the inability to conceive after one year of intercourse without using birth control — BRM also works with same-sex couples that want to have families.

And in recent years, the center has done more work with older couples, Sites noted, adding that this part of a nationwide trend, with growing numbers of people starting familes later in life (and sometimes much later) than previous generations.

She said the process of care begins with consultation, which can sometimes be difficult, because there is still a stigma attached to infertility in some cultures and religions, and, overall, this is a difficult subject for many people to talk about.

“Some people are afraid to talk about it with their families,” she said. “After all, we’re taking about their sexuality, a very private issue. So a big challenge is getting people comfortable enough to discuss these issues.

“Some people may be ready to conceive, and others may not — they may just be having problems with other health concerns such as ovulation or heavy bleeding,” she said. “We talk to them about potential fertility and what options are available to them.”

Over the years, BRM has emerged as one of the top IVF centers in the state, at least according to statistics involving live-birth success rates, which are probably the most telling, said Sites, noting that there are now seven such facilities. (The others, all clustered in the eastern part of the state, are Massachusetts General Hospital Fertility Center in Boston, the Reproductive Science Center in Lexington, Fertility Centers of New England in Reading, Brigham & Women’s Hospital Center for Assisted Reproduction in Boston, Cardone Reproductive Medicine & Fertility in Stoneham, and Boston IVF, in Waltham).

The data shows that BRM has the highest rates in the younger-age categories — under-35 and 35-37 — but also does well across the board, she said, adding that the figures are impressive in terms of the live-birth rates, the rising number of cycles, now more than 500 annually (with a cycle defined as the process where eggs are removed from the ovaries, inseminated into the embryonic lab of the clinic, placed in an incubator to mature, and then implanted back into the uterus for pregnancy), and the number of eggs used per transfer.

This last statistic speaks to a quality that is becoming increasingly important in this field — efficiency, she told HCN, adding that while successful fertilization is the ultimate goal for a facility such as BRM, the broader objective is to achieve this success in an efficient manner, meaning, among other things, reduced need for costly neonatal services.

“To maintain our ranking in the region and have such success rates, while also having the lowest cost, in terms of neonatal intensive care costs, bodes well for Baystate,” she said. “It would be great if more patients knew that; they can get some of the best care in the region, and they don’t have to drive to Boston.”

Sites attributes this success to a number of factors, but especially better selection of embryos for implantation.

“We have an excellent embryology lab here at Baystate, and it’s responsible for much of the success we’ve enjoyed,” she explained. “We have seven embryologists, and over the years, they’ve become better and better at choosing the best embryos. This is partly through culture of embryos longer, so that the best embryos survive.

“It’s taken an evolution in the quality of the media and culture conditions for that to happen,” she continued, “and the talents of the lab have evolved as well, so they are now able to pick the best embryos for transfer to reduce the number of high-order multiples.”

This is the essence of single-egg transfer, she went on, which represents one of the more important advances in this field of medicine.

“One of the early concerns with in vitro fertilization was that the people in the lab, the embryologists, had a hard time selecting the embryos to implant from among the several that had been created,” she explained. “They knew that if they put back more embryos, there would be greater chance of pregnancy — this was shown everywhere — but the problem was, there was also a greater chance of twins, triplets, or quadruplets as well.

“The question then becomes, how does one select the best embryos,” she continued. “It’s a science, but in some ways it’s also an art; it involves a lot of observation in the lab at multiple times to determine if embryos reach a certain stage, and if they have, then they (embryologists) know these are the better ones to put back.”

Choosing her words carefully on the subject of multiple births, Sites said those at BRM do not necessarily discourage them, but she was quick to point out that with multiples, especially three or more) there is a greater chance of premature births, conditions such as cerebral palsy, and even neonatal death.

Birth of a Notion

Specifically, she told HCN that the center looks to do more in the broad realm of pre-implantation genetic diagnosis — something that can benefit couples of all ages — and with other services provided, while also becoming increasingly efficient in its work.

Part of the challenge is simply generating more awareness of the center and the many ways in which it can assist couples and make dreams come true, she went on, adding that if the center can succeed with all of these objectives, then the next birthday party, or IVF reunion, will be even bigger and better.

And that, even more than the impressive live-birth statistics, will be the best indicator of success and continued evolution.

Compounding the Issue The Art and Science of Concocting Pharmaceutical Solutions 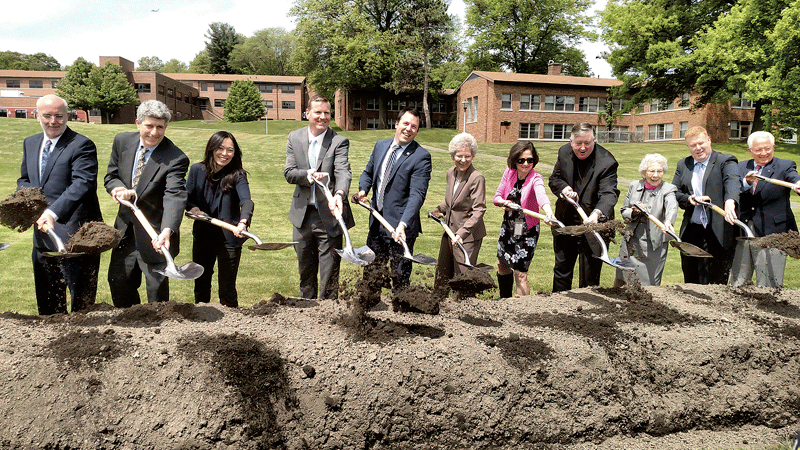 The Dream and the Journey || After Eight-year Struggle, Hillside Residence Becomes Reality