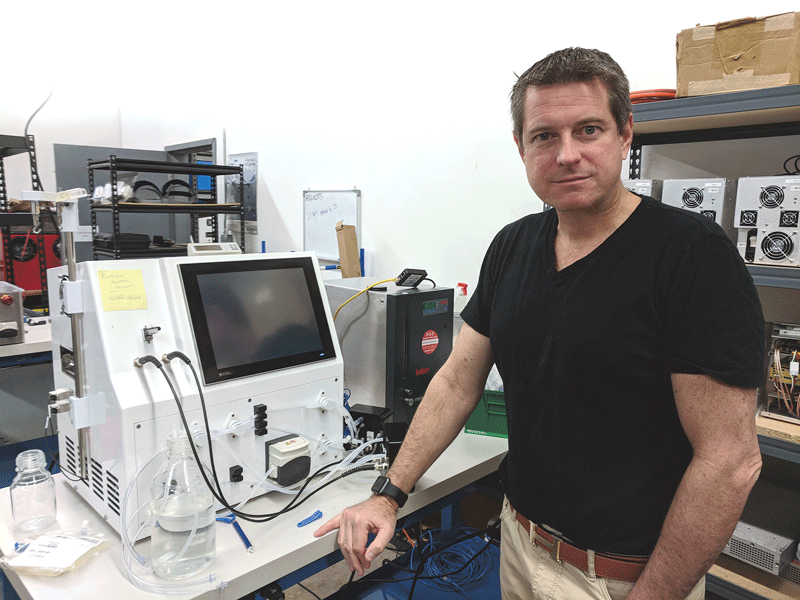 The “filterless filter company,” as FloDesign Sonics dubs itself, was launched in 2010 in an effort to separate contaminants — particularly anthrax — from the water supply.There’s nothing trivial about that goal, but the company’s co-founder and CEO, Stanley Kowalski III, and his team have only been thinking bigger ever since.
“We don’t like mediocre challenges; we take on pretty big issues, and we back it with the best thought leaders in this space,” he told HCN. “We’ve targeted some of the biggest things mankind could be working on, and it gets people motivated on a different level. You don’t have to yell at people … they’re independently driven because every day, they’re working on something exceptionally meaningful. It’s a mission-based company — and we always like to focus the mission on something that’s pretty grand.”
These days, that ‘something grand’ is cell and gene therapy, an existing technology with promise for batting cancer and other diseases, but which is prohibitively expensive — much too costly, in fact, to be available to the masses.
Kowalski believes FloDesign Sonics’ patented, signature process — which captures, separates, and concentrates particles in fluids through the use of acoustic waves — could eventually bring those costs down. And the 32 people working at the company’s Wilbraham headquarters — geneticists, bioengineers, and biochemists among them — are motivated to make that a reality.
“We’re the ‘filterless filter company,’ but we’re also doing cell handling, so just calling it a filter company doesn’t give it credit,” he said. “Right now we’re in the life-sciences industry, where handling of cells is the next frontier of medicine — personalized medicine, cell and gene therapy, where you use your body’s cells to fight things like cancer, grow organs, or restore organs that are damaged.”
We’re living, he continued, in a time of renaissance in medicine, when scientists are learning how to harness the body’s ability to regenerate and repair itself and fight diseases in new ways.
“And there’s nothing more important, I think, that mankind could be working on right now than this,” he went on. “I tell my staff, if Edison or Tesla were alive today, I’m convinced this is what they’d be working on. I really believe that.”

Going with the Flow
To understand what FloDesign Sonics — an offshoot of FloDesign Inc., which was founded in 1990 and has since spawned several spinoff companies — has accomplished, it’s helpful to go back to 2010, when engineer Bart Lipkens received a grant from the U.S. Department of Homeland Security to figure out how to rid reservoirs of anthrax, which was, at that time, a major concern in Washington.
During a process of trial and error, Lipkens’ team at the newly established FloDesign Sonics — including Kowalski, Louis Masi, and Walter Presz — discovered that acoustics could play a vital role in detection.
Kowalski has often explained it by picturing sound waves as an invisible force field that can be used to manipulate and hold things in space. In a chamber filled with fluid, if a consistent flow of sound waves is generated through it, then living cells or debris are introduced into the wave, they will be held there by the invisible force field, and the cells will be gently pushed together and form clumps. When they get big enough, they either fall out of the solution due to gravity or rise to the top due to buoyancy — hence, the ‘filterless filter’ description.
One early assignment came from the National Science Foundation, which issued a challenge — and a series of grant phases — in 2012 to find a way to separate oil and gas contaminants from water. The key, Kowalski told HCN, was to create a process that cost less than the value of the oil being extracted from the water — and let capitalism take over. In 2016, representatives from the company participated in the White House Water Summit to discuss its considerable progress.
The grant, Lipkens said at the event, “resulted in a technology that provides a green, sustainable, and environmentally friendly oil-water separation system for the oil and gas industry.”
Later in 2012, FloDesign Sonics tested a prototype for a life-sciences application that involves harvesting and filtering cells derived from the ovaries of Chinese hamsters that are used to make injectable monoclonal antibody drugs, which are being used to fight cancer, diabetes, and other illnesses. A grant from the National Institute for Health followed in 2014, along with a challenge to devise a better way of filtering blood during bypass surgery.
Creating a way to bring cell and gene therapy essentially to the hospital bedside — not unlike dialysis — is an altogether different challenge, however, a holy grail of sorts in the oncology world.
“With all the tools available today, we really need a paradigm shift,” Kowalski said. “Manipulating cells and bringing either a particle or a virus or a genetic payload to these cells is what cell and gene therapy is all about — holding them, washing them, cleaning them, sorting them, separating them, finding that needle in a haystack of cells in your body that have the propensity to repair, restore, rebuild, and make you who you are all over again. That’s what our quest is.
“There’s so much can be done, and it really does rival the Henry Ford challenge, because right now, cell and gene therapy is only available for the few, and it’s exceptionally expensive — off-the-charts expensive, maybe $500,000 per patient, on the low end.”
With more than 250 patents filed in the past decade and more than 50 granted, FloDesign Sonics continues to take steps toward using acoustic filtering to bring down the cost of activating cells and “turning them into the warriors they can be to go compete against cancers,” as Kowalski put it.
Meanwhile, FloDesign Sonics is looking to transform the biopharmaceutical process as well. Many of today’s pharmaceuticals are produced by culturing cells that produce therapeutic proteins or monoclonal antibodies. After the proteins or antibodies are produced, it’s necessary to gently remove the cultured cells as part of the purification process. Current technology requires the use of either a filter, which must be flushed or replaced, or a centrifuge, which requires careful cleaning between each use.
The FloDesign solution permits both cell clarification and perfusion without the need for consumable filters or complex centrifuges. This technology was exclusively licensed to Pall Life Sciences for commercialization and launched in 2016.

Drowning in Opportunity
While medical applications for acoustic filtering may be making the most waves (pun intended) at the moment, they’re far from the only ones.
“One of our board members likes to call it ‘drowning in opportunity’ because every time you turn around, there’s someone else to draw you in,” Kowalski said. “There are industrial applications, food and beverage applications, water purification. People need clean water; it’s still considered one of the major hurdles of mankind.”
Still, he added, “we are maintaining focus around cell and gene therapy until we get these drug costs down.”
That focus on solutions has driven FloDesign since 1990, when Presz created the company while he was an Engineering professor at Western New England College so he could give his students an opportunity to put theory into practice.
FloDesign Sonics is just one of several spinoff companies that have come out of that original entity. Others include FloDesign Wind Turbine, which was founded in 2008, and FloDesign Water Turbine, which was established in 2009. The common thread is that all have something to do with fluid dynamics and acoustic solutions.
Since its founding in 2010, FloDesign has raised $44 million in venture capital and grants from bodies like the National Science Foundation and the National Institutes of Health. Its board includes a number of significant lights in the life-sciences world, including Jim Waters and Doug Berthiaume, the founder and former CEO, respectively, of Milford-based Waters Corp., which Berthiaume grew to $2.2 billion in revenue before retiring in November.
They’re drawn, Kowalski said, by the idea that the acoustic-filtering technology pioneered by FloDesign Sonics can change people’s lives. “We believe that, and it’s already happening,” he added.
“Every time there’s a hurdle that mankind hits, we always find a way around it, and we solve problems. We’re very good at that,” he went on. “I think we’re right at that threshold where we’ve had enough of cancer. So it’s time to figure this thing out. And the engine behind this is acoustics.”

Controlled Chaos In the Trauma Bay, Work Is Carefully Choreographed 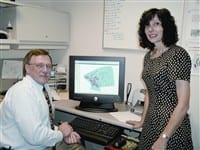