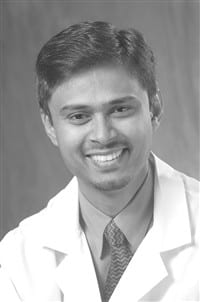 SPRINGFIELD — Mercy Medical Center has announced the addition of two new physicians to the Mercy Internal Medicine Service (MIMS). These recent appointments bring to a total of nine the number of full-time, board-certified internists who serve as staff ‘hospitalists’ at Mercy.

Syed H. Mehdi, M.D., earned his medical de-gree from the University of Karachi’s Sind Medical Col-lege in 1992. He completed his residency in Internal Med-icine in 1997 at St. Francis Medical Center in Trenton, N.J. and the University of Medicine & Dentistry of New Jersey.

Mehdi comes to Mercy Medical Center from the Southwest Community Health Center in Springfield, where he served as chief of Internal Medicine from 2000 to 2002.

Prior to that he served as an internist at Hassan Medical Group in Albion, N. Y. from 1999 to 2000. Mehdi did a one-year fellowship in Adolescent Medicine in 1998 at the Medical Center of Delaware in Newark, Del.

Shawn C. Charest, M.D., earned his medical degree in 1998 from the University of Vermont College of Medicine in Burlington. In 1993, he earned his bachelor’s degree in Biology and Japanese Studies from Bates College in Lewiston, Maine.

Charest completed his internal medicine internship and residency in 2001 at Baystate Medical Center in Springfield. In 2000, Charest served as a training facilitator for the Change of Heart Program in Springfield, which facilitates training in stress reduction, mindfulness, and healthful cooking for cardiac rehabilitation patients.

The Mercy Inpatient Medicine Service is a group practice composed of internal medicine specialists (hospitalists) who are dedicated solely to the care of hospitalized patients.

Each member of MIMS holds specialty certification by the American Board of Internal Medicine. The service is offered by Mercy Medical Center in partnership with community physicians to provide the highest possible quality of hospital care.