Networking has taken on an entirely new meaning for a team of cancer specialists at Mercy Medical Center recently.

The lung cancer program at Mercy, nearing the close of its first year in existence, was conceived to address the leading cause of cancer deaths in the U.S. among both men and women by creating a team of specialists and a model for care – a new network – designed to streamline the diagnostic and treatment process for patients with lung and esophageal cancer.

Drawing from the expertise of several individuals in the areas of surgery, oncology, radiation therapy, social services, and other disciplines, the program also uses a multidisciplinary approach to aggressively treat patients suffering from a disease that is often fast spreading and complicated.

Dr. Francis Podbielski, leader of the program’s surgical team, explained that the program essentially aligns the many steps of the diagnostic and treatment process associated with lung cancer and allows patients to access both information and treatment in one place – the Sr. Caritas Cancer Center on the Mercy Medical Center campus.

“Lung cancer generally occurs in older people who smoke,” he said. “These people need accurate, expedient care, and that’s what this program was devised to provide.”

Podbielski added that through the power of many working toward one common goal, the lung cancer program is also making strides in the areas of breakthrough medicine and technology, and is constantly exploring new treatment options such as interventional radiology and less-invasive, videoscopic biopsy procedures.
That study of new options is intrinsic to the treatment of lung cancer, he said, because of its complicated nature.

“In lung cancer patients, there is often an underlying lung disease as well, such as emphysema,” he said. “We might look at a patient and see that, solely based on the presence of cancer, a portion of the lung should be removed. But if there is another problem present, the patient is likely to already have a diminished breathing capacity, and that significantly changes the game.

Further, screening for lung cancer doesn’t have as much of an effect on survuval rates as it does for other cancers such as colon, breast, or cervical cancers, due in part to the correlation between smoking and the disease. Non-smokers, Podbielski explained, are at significantly lower risk, so screening is not practical for everyone, and often, people discover lung cancer by accident.

“The most basic thing that is recommended or offered for people who are at risk (primarily smokers) is a chest X-ray every one to two years,” he said, noting, however that the typical smoker does not go to such lengths. “Generally, they go to the doctor with a flu that won’t go away, or for an X-ray after breaking a rib in a fall. That’s when the X-ray finds something else that shouldn’t be there.”

And that, he said, makes the aggressive, structured treatment of the disease that much more necessary to curbing mortality rates.

Tricks of the Trade

Mercy’s Lung Cancer Program is still in its infancy, and more educational or community outreach components may be added in the future. Currently though, its most important aspect is firmly in place, according to Podbielski: coordinated care.

“We’re still getting this program up and running, but the framework that gets all those different things working together – surgery, medical oncology, radiation oncology, pathology – that’s there.”

He explained that the network allows him and his fellow team members to not only care for a patient, but also refer them immediately to the next appropriate person.

That may sound like a small process improvement, but Podbielski added that when it comes to a disease as life threatening as lung cancer, every minute saved is a minute gained for a patient.

“We’re not telling patients what the next step is in their treatment and then sending them on their way with the direction to schedule an appointment in the next few weeks,” he said. “We’re telling them what the next step is and directing them there over the course of 20 minutes. That’s how much of a difference we’re talking about here.”

The program also provides for greater communication and organization among its team members, Podbielski said, who meet bi-weekly to discuss various treatment options, advances in care, available clinical trials, and other topics.

“Psychologically, I think the organization ultimately helps the patients,” he said. “Each component of the treatment process is available to them without a lot of hassle, and the communication among the team helps us to be more available to the patients.

“We have an understanding among us that any of us can field a call from a patient, even if the questions aren’t within our area of expertise,” he continued. “We’ll answer the call, and offer answers in generalities if we have to, then get them more specific answers from the appropriate people. This way, patients aren’t getting lost in the system. They’re receiving immediate attention to their needs.”

Cancer Patients Should Empower Themselves 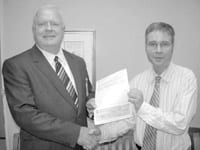 Sisters of Providence Health System Gets $1.6M from ‘Distressed Provider’

The Science Of Choosing A Health Plan Survey: Many Americans Give Themselves Poor Grades On Understanding Health Benefits