George Koller says officials at Noble Hospital have talked about adding a medical office building to the West Silver Street complex for nearly two decades now.
Koller, president of Noble since 1991, told The Healthcare News that need for such a facility has always existed, primarily because the medical staff continues to grow, as does the patient population it serves. But recent trends in health care have made an office structure even more of a necessity, he said, and this combination of factors has moved the project from the talking stage to the action phase.
Indeed, Noble has started the municipal permitting process for a 30,000-square-foot medical office building that will be the centerpiece of an expansion project that will also include a new 12,000-square-foot lobby and admitting area.

The two facilities, which will be connected, will be built in an area to the right of the hospital’s main entrance on West Silver Street that is currently a parking lot, used mostly by physicians and staff. Plans call for moving physician parking to a lot toward the back of the hospital and the shuttling of more than 100 hospital employees from the lot of a new ice skating rink in the city located about a mile from the hospital.

The shuttle plans show just how cramped the hospital is on the site chosen for it by founder Reuben Noble more than century ago, Koller said, and the steps necessary to make additional building on that site possible. But current realities in healthcare — everything from a growing patient census to heightened competition for doctors — make the expansion project well worth the logistical headaches.

“This is something the hospital must do if it is to continue providing the highest quality service to the communities it serves,” said Koller. “The need is there, and we have to find ways to meet it.”

If all goes as planned, Noble should begin its planned expansion next spring, said Koller, and that won’t be a moment too soon for patients who have had to cope with an admitting area built in the 1950s, and for physicians who have been forced to take office space where they can find it in other sections of Westfield — and sometimes beyond.

Added convenience for patients and physicians alike is the primary motivator for the expansion, said Koller, who told The Healthcare News that the venture, now winding its way through the approval process, would benefit the hospital in a number of ways.

For starters, it will help the hospital in its efforts to recruit new physicians, especially specialists, and it will improve the hospital’s image at a time when competition between area providers is at its zenith. “Any time a business expands with bricks and mortar, it sends it sends a positive message,” Koller said. “We’re sending a message that we’re healthy and we’re growing.”

And from a logistical standpoint, the expansion will free up space in the hospital, Koller said, adding that several physicians now have office space in the hospital itself — room that could be put to much better use — and the current admitting area could be dedicated to integrating new technology, such as a permanent MRI facility.

But convenience is the overriding issue, Koller stressed.

“It’s a quality-of-care issue,” he explained. “If doctors are close by, they can provide better care more quickly. By having specialists in this building, it’s more convenient for patients and for the doctors themselves.”

It is in the area of physician recruiting, however, where the new medical office building is expected to make perhaps its greatest impact.

“This new facility will be a big help to us in our recruiting efforts,” said Koller. “Over the past several years, we haven’t had any trouble selling Westfield — people love the quality of life that exists here — and we haven’t had any trouble selling the hospital — people love that, too. Where we have had problems is when we tell them there is no office building here.”

That reality has forced physicians to seek space in other areas of the city and even neighboring communities, such as Southwick, Koller said. And it has compelled the hospital to look at a number of imaginative options over the years, such as the possible acquisition of the former Stanhome corporate offices on Western Avenue, which were eventually acquired by Westfield State College, which is adjacent to the Stanhome site.

The new 30,000-square-foot facility will give the hospital space to house a number of specialists, Koller said, adding that the final number will be determined by just how large the individual offices will be, but there will probably be about 15.

The facility is being built by West Springfield-based Pearson Systems, which has entered into a unique arrangement with Noble, one that will minimize risk for the hospital. Noble will continue to own the land, but Pearson will build, lease, and manage the office structure. According to the terms of the contract, ownership of the building will revert back to the hospital in 40 years.

Koller said Noble’s current lobby and admitting area were fine for the day they were built, but certainly not today.

“The current lobby has a look and feel of the ’50s,” he said. “In a word, it’s tired, and it’s dark and there is no privacy for people using it.”

The new 12,000-square-foot, three-story admitting area will enable the hospital to more efficiently handle the larger patient volumes it is seeing each year, he said. The six registration areas planned for the new facility — double the current number — will allow for much faster throughput of patients.

Meanwhile, the second and third floors of the new, $800,000 admitting area will provide needed space for conference rooms and administrative offices, he said, relieving cramped conditions in other areas of the facility.

“We’re going to gain some breathing room,” said Koller, “and we need it because the communities we’re serving are growing, and we have to grow as well.”

To make the expansion plans workable, however, Noble had to find a solution to the dilemma posed by the elimination of more than 100 parking spaces, said Koller. And like other hospitals that are pressed for space, it found the answer in a shuttle system.

The hospital has been looking for possible satellite lots for some time, he explained, and found one at Amelia Park, the new ice-skating rink and public park built by Westfield philanthropist Al Ferst in honor of his late wife, Amelia. Current plans call for the hospital to take 140 spaces at the rink between the hours of 8 a.m. and 5 p.m., when there are few activities at the facility.

Physicians will still park at the hospital, Koller said, as will odd-shift employees and those who carpool — three or more employees in one vehicle. Meanwhile, all hospital employees, including administrators, will take part in the shuttle system.

The satellite lot and shuttle-parking policies may seem like extreme measures, Koller said, but they are dictated by Noble’s unusual situation. The hospital was built in 1895, at a time when it would be hard to imagine the current pace of growth in the Westfield area, let alone the challenging health care environment of today.

“We’re landlocked … if we’re going to expand — and we have to — this is the only way we can do it,” he said. “Our city is growing and there are more health care demands. And we have to meet them.” 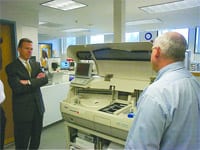