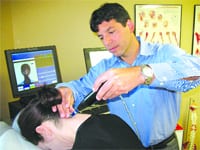 That’s Dr. Jeffrey Soley’s take on the ProAdjuster, a NASA-developed technology that has been put to use by some 2,500 chiropractors around the world.

“You can’t determine the structural integrity of the space shuttle cooling tiles just by looking at them,” said Soley, who has a chiropractic office in Westfield. “So NASA pioneered this technology to test the resonance of the tiles, by which they can tell whether or not the tiles have integrity. Visually, you’re just not able to tell.”

The technology used for that mission-critical task was adapted to develop the ProAdjuster, which operates on a similar principle — that is, identifying areas along the spinal column that need adjusting, inconsistencies that might not be readily apparent during a conventional exam, and might not even manifest as pain symptoms.

Soley said the device has helped him bring relief to patients with back and neck pain, sciatica, headaches, and a number of other conditions, while helping his growing practice move firmly into the 21st century. He sees the technology as the leading edge of a revolution in chiropractic care, one as dramatic as laser surgery has been for eye specialists.

Soley’s parents, who live in Florida, were the ones who first drew his attention to the ProAdjuster after they were treated with it. “They said, ‘you have to use this machine,’” he said. “I was skeptical at first, but I couldn’t be happier with this system.”

To understand the ProAdjuster, Soley said, it’s useful to understand what a chiropractor actually does. While some perceive chiropractic medicine to deal with the skeletal structure, he explained, it’s really a case of the nerves.

“As a chiropractor, I’m primarily concerned with the function of the nervous system and, more specifically, how it relates to the proper functioning of the joints of the spine,” he said. “People come in with back pain, neck pain, or headaches, and many of these conditions are attributable to spinal joint dysfunction.”

This dysfunction, he explained, is what the ProAdjuster targets. The chiropractor holds the device against each vertebra in turn, where it applies six pounds of pressure with a tapping motion on the spine. The response of the vertebra is reflected back into a sensor which creates a curve graph on a computer screen. In a completely healthy spinal column, all these curves would look the same. Those that diverge from the others show areas of the spine that need adjusting.

Therefore, the ProAdjuster gives the chiropractor clear, graphic evidence where before, he relied only on touch. The difference between the device and conventional touch is that the body tends to respond to hands-on pressure with an involuntary muscle contraction or flinch, which can skew the chiropractor’s observations. But the ProAdjuster registers its readings more quickly than the body is able to react, which creates a more accurate picture of what’s happening in the spine.

“It’s a computer-driven system that uses a very precise instrument to both measure and treat aberrant motions of the spine,” Soley said, noting that the same instrument is then used to align the vertebrae and bring those curves back into line.

The ProAdjuster boasts multiple heads, not only to switch from analysis to treatment, but to perform specific protocols on the spine, from headache or sciatica to carpal tunnel syndrome or even sinus problems, all of which have a link to the state of the nervous system, Soley said.

“People have done well with this. There are a lot of ways to influence muscle function and nervous system function with this machine,” he said, comparing the quality of treatment to laser eye surgery. “When eye surgeons moved away from the old-fashioned scalpels, they were more precise, and patients were more confident. In the same way, this takes a lot of the guesswork out of chiropractic treatment. It’s amazing.”

The technology is cutting-edge in more ways than one, however. Soley noted that the ProAdjuster can detect problems long before they are manifested as patient complaints — “most people have a problem before the pain ever shows up,” he said — making the device useful as a preventative tool.

However, he explained, most people don’t see a chiropractor unless they have discomfort — a trend he hopes changes in the years to come.

“We are now where dentists were back in the 1950s,” he said. “Until then, people didn’t go to the dentist until they had a toothache. Now people are more aware of preventative dentistry and the need for regular cleanings. There’s an analogy there to what we do; unfortunately, people wait until they have pain to come in to use our services.”

Soley explained that many patients blame an injury for their pain symptoms — turning too quickly or bending down to pick something up, for example — when all along they had a correctable problem that made them susceptible to the injury.

Soley hopes breakthroughs like the ProAdjuster hasten a changing perception of chiropractic medicine to one which is not limited to treatment of immediate pain. He has already seen a positive shift in his own practice.

“My office is too small,” he said. “I’ve been here for five years and always thought my office was too big, and now I realize I need more space. This has been a big breakthrough for my practice, and I think this will revolutionize chiropractic care.” 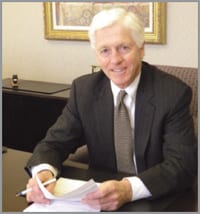