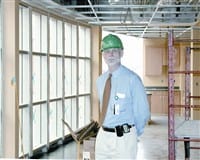 Hard hat in place, entering the construction site that will soon be a $37.5 million regional cancer center, Dr. Wilson Mertens took a look up — and was happy the ceiling doesn’t rise too high.
“It’s clean, modern, and welcoming, but not ostentatious,” Mertens said, noting that the lobbies of some high-profile medical centers feature atriums that rise several stories up. “People with cancer already feel two inches tall when they come in here. We don’t want to dwarf them; we want to welcome them.”

It may seem a minor point, but it’s one of dozens of such details aimed at lessening anxiety and making patients feel as comfortable as possible in Baystate Medical Center’s 65,000-square-foot development on Main Street in Springfield.

For instance, Mertens, medical director of Cancer Services at Baystate, didn’t want too many doors on the first floor, saying that an open, welcoming feel for patients does not include closing off departments to one another.

“The architects kept sneaking doors in, and we kept taking them out. Doors don’t add any value, and they make patients feel like they can’t escape,” he said.
“What we really wanted to do was create a space dedicated to patient well-being from the patients’ point of view, not the doctors’. And we started on a journey of true cancer services integration.”

As he gave The Healthcare News a tour of the facility, set to open on Jan. 26, Mertens stressed that the state-of-the-art technology being employed will draw regional attention to the center, but the small details intended to put patients’ minds at ease can be an equally significant part of putting their lives back together.

Located beside Baystate Health System’s breast center, the new structure includes space for clinical exam areas, infusion therapy and radiation therapy services, and a variety of support services, and it boasts plenty of natural light, avoiding what Mertens calls the dungeon-like setting of many cancer facilities.

For instance, the infusion suites, where patients receive chemotherapy for up to eight hours in a session, will have windows to the outside so patients don’t feel so confined. Nearby will be a game room and a small kitchen, while a café is further down the corridor — but only cold foods will be served there, to reduce the wafting smells from hot foods that might set off patients already fighting back nausea.

To better meet the needs of patients, Mertens said, “we’ve rewritten the operating manual for a cancer center” — after gathering input from organizations such as the American Cancer Society, the Cancer Connection in Northampton, and the Center of Hope in Westfield .

“Focus groups were held with cancer patients,” he said. “And what we found out is that cancer patients want a more pleasant, more efficient experience for themselves and their families.”

That word efficient is a key concept, Mertens explained. No matter what kinds of amenities are available for patients, he said, they won’t be comfortable unless they feel like they’re getting quality, attentive care.

Therefore, much of the center was designed to facilitate what he calls an improved coordination of care, allowing for faster response times and meetings with multiple specialists at one time — all of which means fewer visits for patients because more gets done with each visit. “There will be one patient chart, not five,” he said.

“Exam rooms will be reconfigured to allow multiple specialists to see the patient at the same time, which allows them to have face-to-face contact, coordinate opinions, and develop a plan for care. Physicians will be working alongside colleagues in other specialties, where now they are separated by geography.”

Indeed, fewer specialists will now be working behind closed doors in separate offices; teamwork between departments is being improved step by step, even if it means changing the habits of doctors not used to working in teams. “We have to change the nature of the work because the job has changed,” he said.

Even more importantly, patients with specific cancers will not have to hew to a strict number of times when they can meet with doctors.

“With some cancer centers, Monday is breast day, Tuesday is colon day, Wednesday is lung day, and so on,” Mertens said. “That’s very efficient, but it’s not very patient-friendly.

“We’re here to respond quickly,” he continued. “So, breast cancer day is every day. We are not going to hold you up because of our schedules — because we decided that Thursday is bowel day.”

That improved focus on efficiency will be complemented by an investment in the latest technology — and ‘investment’ is the right word. More than one-quarter of the project’s price tag — $10 million — is being spent on radiation therapy equipment alone.

That includes four linear accelerators, which are commonly used for external beam radiation treatments for cancer patients — two of which will be equipped with cutting-edge Intensity Modulated Radiation Therapy (IMRT) technology, which uses computer planning to maximize the radiation dose to cancer cells while minimizing the impact on surrounding healthy tissue. Other machines could be equipped with IMRT in the future as the need increases, Mertens said.

One of Mertens’ major challenges has been balancing such expensive machinery against seemingly minor details — such as designing examination rooms so doctors can always work from the patient’s right side, the natural side, and have all his or her equipment within arm’s reach — and giving equal priority to both.
But Baystate seems to have done just that. This is, after all, a building where televisions may be viewed only with headphones and a paging system will be used only in a cardiac-arrest situation, with wireless devices and computer screens used to communicate otherwise, all in an effort to reduce the wall of noise associated with some medical facilities.

Cancer is not an easy experience, after all, Mertens said — and any little improvement that can make treatment more pleasant is not too small to incorporate into the plans of a decidedly modern cancer center.

“A cancer program is about people — patients and their families, care providers, and community participants working together,” he said. “For those of us who diagnose and treat cancer, there is no greater honor, no greater vote of confidence, than to have patients who are at their most frightened and most vulnerable put their trust in us to care for them.”

Clearly, a door is opening to a new era of cancer treatment in Massachusetts — even where there isn’t a door to be found.

Cloud Coverage – Before Moving Services to This Environment, Do Your Homework