The votes in Congress were expected. So were the court injunctions that followed. What remains uncertain is the future legal status of a procedure dubbed partial-birth abortion by opponents.
Although the method is relatively rare, the political battle lines surrounding it have been fiercely drawn, as the pro-choice community sees a ban on any pregnancy-ending procedure as the first step in the further curtailment of abortion rights — while pro-life activists welcome an opportunity to roll back what they perceive as a gruesome and unnecessary medical act.

When both houses of the U.S. Congress passed the ban, it marked the third time in the past several years they had done so, but President Clinton vetoed similar measures the first two times, saying they made no provision to protect the health of the pregnant woman. This time, President Bush was willing to sign the ban into law.

“For years, a terrible form of violence has been directed against children who are inches from birth, while the law looked the other way,” Bush said before signing the ban in early November. “Today, at last, the American people and our government have confronted the violence and come to the defense of the innocent child.”

The issue may eventually move all the way to the Supreme Court and face what promises to be a close verdict. For now, however, the war of words is only heating up.

The reason the rulings could render Congress’ act moot for the moment is that the first two rulings, made by U.S. District Judge Phyllis Hamilton of San Francisco and U.S. Judge Richard Casey of Manhattan, alone cover a majority of the abortion providers in the U.S.

“The ruling confirms that it was reprehensible for lawmakers to push through a ban that will harm women in need of critical medical care,” said Louise Melling, director of the American Civil Liberties Union (ACLU) Reproductive Freedom Project. “By refusing to include a health exception, lawmakers demonstrated that they are willing to trade women’s health and to flout the Constitution for political gain.”

“We are pleased that the court acted quickly to protect women and their doctors,” added Vicki Saporta, president and CEO of the National Abortion Federation. “Allowing Congress to practice medicine without a license endangers the lives and health of women. We need to ensure that medical decisions are made by experienced and qualified medical professionals. Thankfully, the court understood the gravity of the situation and stopped this law from taking effect.”

However, anti-abortion groups were equally adamant that lawmakers had done the right thing in passing the ban. The procedure in question, generally performed in the second or third trimester, involves the partial delivery of a fetus followed by death, usually by puncturing of the skull.

“Partly born, premature infants will continue to die at the point of seven-inch scissors, because of these judicial orders,” said Douglas Johnson, legislative director of the National Right to Life Committee. “But we believe that this law will ultimately be reviewed by the Supreme Court, where five justices in 2000 said Roe vs. Wade guarantees the right to perform partial-birth abortions at will.”

With no changes on the high court since then, and perhaps little turnover expected in the coming months, another close vote is expected should the issue get that far. President Bush believes medical science is on his side, citing former Surgeon General C. Everett Koop in claiming that the majority of partial-birth abortions are not required by medical emergency.
“The facts about partial birth abortion are troubling and tragic, and no lawyer’s brief can make them seem otherwise,” Bush said. “By acting to prevent this practice, the elected branches of our government have affirmed a basic standard of humanity, the duty of the strong to protect the weak.”

But Gloria Feldt, president of the Planned Parenthood Federation of America, immediately countered that, since courts were questioning the potential constitutional violations of the ban, those findings are sufficient to constitute “irreparable harm warranting the issuance of a temporary restraining order.”

Opponents of the ban continue to worry that it could begin a trend toward outlawing further common abortion procedures, pointing to what they call a larger campaign to undo Roe vs. Wade. That’s one reason the ACLU has successfully challenged partial-birth abortion bans in a handful of U.S. states already.

The U.S. Justice Department, in an official statement, says it “will continue to strongly defend the law prohibiting partial birth abortions using every resource necessary.”
But if history is any judge, the Bush administration and supporters of Congress’ recent action might be fighting an uphill battle. 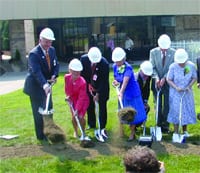 Exit Interview As He Prepares to Leave the SPHS, Vince McCorkle Looks Back, and Ahead