As American Heart Month begins, the American Heart Assoc. (AHA) has issued a call to action for the public, health professionals, the food industry, and the government to intensify efforts to reduce the amount of sodium that Americans consume daily.

In an advisory, published in Circulation: Journal of the American Heart Association, the organization sets out the science behind its recommendation that the average person should consume no more than 1,500 mg of sodium a day because of the harmful effects of sodium, including elevated blood pressure and increased risk of stroke, heart attacks, and kidney disease. In addition, elevated blood pressure (hypertension) is a major public health problem — approximately 90{06cf2b9696b159f874511d23dbc893eb1ac83014175ed30550cfff22781411e5} of all Americans will develop it over their lifetime — exacerbated by high sodium intake.

Average sodium consumption is currently more than two times higher than the recommended upper limit of 1,500 mg daily, with 77{06cf2b9696b159f874511d23dbc893eb1ac83014175ed30550cfff22781411e5} of that consumption coming from packaged, processed, and restaurant foods. “Even a modest decline in intake — say, 400 mg per day — would produce benefits that are substantial and warrant implementation,” say the advisory authors.

The 2005 U.S. Dietary Guidelines for Americans recommended a sodium intake limit of 2,300 mg per day, which many health experts say is too much for most Americans. Earlier this year, the Dietary Guidelines Advisory Committee recommended to the secretaries of the U.S. departments of Agriculture (USDA) and Health and Human Services (HHS) that the goal should be modified to 1,500 mg per day for the general population. The advisory committee consists of leading scientists who reviewed the most recent scientific studies and created a set of recommendations that are being reviewed by the secretaries.

Recently, the American Heart Assoc. lowered its recommendation to no more than 1,500 mg of sodium daily for the general public after a report from the Centers for Disease Control found that a majority of the American population either have high blood pressure or are at high risk for developing it.

According to the advisory:

The American Heart Assoc. is also taking part of the National Salt Reduction Initiative, which is working with the food industry to reduce sodium content in packaged and restaurant food.

Inherent to the negative health effects of sodium are rising health care costs, the authors add. They point to one recent study suggesting that a national effort to reduce sodium intake by 1,200 mg per day should reduce the health burdens related to heart disease in addition to reducing costs by up to $24 billion per year.

“Americans deserve the opportunity to choose how much sodium is in the food they eat. By supporting measures that will reduce sodium in the overall food supply, we are giving consumers freedom to select foods that could allow them to meet sodium recommendations and improve their ideal cardiovascular health,” said Dr. Ralph Sacco, president of the AHA.

The American Heart Assoc. also advocates for more robust sodium criteria within school nutrition standards, foods advertised and marketed to children, and foods purchased by employers or government feeding programs, and for the secretaries of HHS and USDA to adopt the Dietary Guidelines Advisory Committee recommendations.

The association also supports improved food labeling that helps consumers understand how much sodium is in their diet, as well as consumer education in restaurants to help consumers choose lower-sodium options.v

This article is a service of the American Heart Assoc. 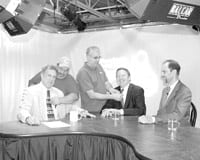