As the senior population continues to spiral upward, so do incidences of emphysema — and doctors say it’s simply decades of bad habits coming home to roost.
According to the National Emphysema Foundation, 11{06cf2b9696b159f874511d23dbc893eb1ac83014175ed30550cfff22781411e5} of Americans have some type of chronic obstructive pulmonary disease, of which the two most severe types are emphysema and chronic bronchitis.
And those numbers are rising, but the trend doesn’t surprise doctors, as the vast majority of emphysema cases are caused by smoking. Even though the smoking habit itself is not on the rise, due in part to better education and higher cigarette taxes, generations of elderly Americans who spent lifetimes smoking are feeling the effects today.

“Most of emphysema is smoking-related,” said Dr. Gerald Green, a pulmonary surgeon at Baystate Medical Center. “People didn’t listen to the surgeon general, so we do have more cases. They tend to be in older people, and most of these cases would have been completely preventable had they stopped smoking.”

Downward trends in cigarette smoking by adults have medical professionals breathing easier, and better treatments are doing the same for those fighting emphysema. But lung disease remains an all-too-common scourge — and, for now, an incurable, though treatable, one.

Emphysema is a chronic lung disease which affects the alveoli (the lung’s air sacs) and the ends of the smallest bronchi (the breathing tubes). The diseased lung loses its elasticity, similar to an overused rubberband, and the damaged areas of the lung become enlarged. This can result in insufficient oxygen being delivered to the blood in the lungs and problems in getting rid of carbon dioxide.

Difficulty breathing and shortness of breath, particularly when exhaling, is the common result. Though the causes of all chronic lung diseases aren’t fully understood, it’s clear that smoking is far and away the main cause of emphysema. Other environmental factors, such as air pollution, occupational exposures, and second-hand smoke, may also play a role, and heredity is a factor in a very rare form of the disease, Green said. No matter what the other causes, he noted, seriously curtailing the smoking habit in the United States would eventually bring about a dramatic decline in emphysema rates.

“The concern, of course, is having people start smoking in their teenage years,” he said. “Those are the most likely people to become chronic smokers, so it’s essential that teenagers be discouraged and educated not to smoke.”

Even the rare, congenital forms of the disease can affect the lungs in such a way that smoking can trigger emphysema at an early age, so doctors are seeing patients in their 20s and 30s, not just in their 60s and 70s, he said.

Because emphysema can be a disease people live with for decades, managing its effects is crucial — and that’s where initiatives like Baystate’s pulmonary rehabilitation program come into play.

“Every few years, some new treatment comes along that might be able to control emphysema,” he said, “but once it has occurred, the most significant intervention is pulmonary rehabilitation — that is, learning how to function better with your disability or impairment.”

Baystate’s program is an educational outreach combined with ongoing evaluation that gradually allows patients to do more in spite of the disease, said Marie Lemoine, a nurse and program director. “More and more health care providers are seeing the benefits of pulmonary rehabilitation and are referring emphysema patients to rehab to improve their stamina, exercise tolerance, and education, so that they can better manage their disease,” Lemoine said.

“It has been extremely successful in getting people to become more functional,” Green added, noting that nurses work with patients to make sure they know how to eat and breathe properly, as well as know the value of medical interventions such as flu shots and pneumonia vaccines.

“Emphysema is an overinflammation and destruction of air sacs, and there is an obstruction in air flow, making people short of breath,” Lemoine stressed. “At home, many haven’t done exercises — they barely do the activities of daily living. Getting the mail or preparing meals can be big-ticket items that take a lot of effort.”

What the rehab program does, she explained, is teach patients about what causes shortness of breath and how to breathe correctly and build up an exercise regimen. “Patients are willing to do more in a supervised setting, and that builds their self-confidence along with their exercise tolerance, so that they can live a better life,” Lemoine said.

In addition, the support gained from group participation with others who share the same affliction builds self-esteem. “These people don’t have to explain why they’re short of breath,” she said. And that, as much as learning how to properly use an inhaler or knowing how factors such as humidity affect breathing, can be life-changing in itself, she added.

For some patients, more radical treatments are available, Green said. For example, lung transplant surgery is available but is fairly rare, due in no small part to a long waiting list, as well as the risk of complications common to all organ transplants.

“We do have patients who are highly motivated, who have severe impairment, who have gone on to transplantation with significant success, but not many people get transplants because of the tremendous shortage of organs,” he said.

Lung reduction surgery, while only in trial phases, is a more promising option, according to the National Emphysema Foundation. The idea is that chronic lung disease causes the damaged parts of the lung to enlarge like balloons, pressing on the rest of the lung and making it even more difficult to breathe. The surgery removes the enlarged areas and allows the rest of the lung to expand again.

“There’s a national trial underway to determine its benefit, and the results will be coming out soon,” Green said, stressing that the surgery is not a cure. “The patient will still have the underlying emphysema, but when the operation is over, we’ll have removed the most damaged tissue. The goal is for more healthy tissue to fill in the place of the area that’s removed. But it’s a temporary solution.”

A more permanent one is a simple one: stop smoking, or don’t start. No matter what the other factors may be, smoking remains the number-one cause of emphysema, not to mention a host of other lung diseases, which is why disease rates are on the rise — even for seniors who have quit smoking, decades of damage can still take their toll, and an aging population will only produce more cases.

“I just keep saying that people should stop smoking, which is the best chance they have of minimizing emphysema,” Green said. Studies show that the message has gotten through to people in higher education demographics, who aren’t smoking at the rate seen in decades past.

A Little Knowledge
But many Americans, particularly those with less education, according to the research, aren’t listening, even as exorbitant cigarette taxes and shrinking accessibility to smoking in public places combine to make the habit more socially and economically difficult.

“People who have been smokers are also more likely to have lung cancer, vascular disease, and risk factors for coronary artery disease, so many things could be avoided if people could stop smoking,” Green said.

Few diseases could be more effectively brought under control within a few decades if people just changed their habits, but emphysema and other lung diseases certainly fit that bill. Whether the trends will change remains to be seen, but for now, much of elderly America is paying the price for their smoking habits.

Fortunately, emphysema may at least be brought under control in many patients if they are willing to make the commitment to hard work.

“Your lung function will not change,” Lemoine said. “However, you can improve your quality of life. Patients are afraid, but when they get a little bit of knowledge, it’s easier for them to understand.”

Getting them to understand when they’re younger, before they pick up that first cigarette, has been a far more difficult challenge. 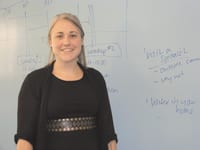