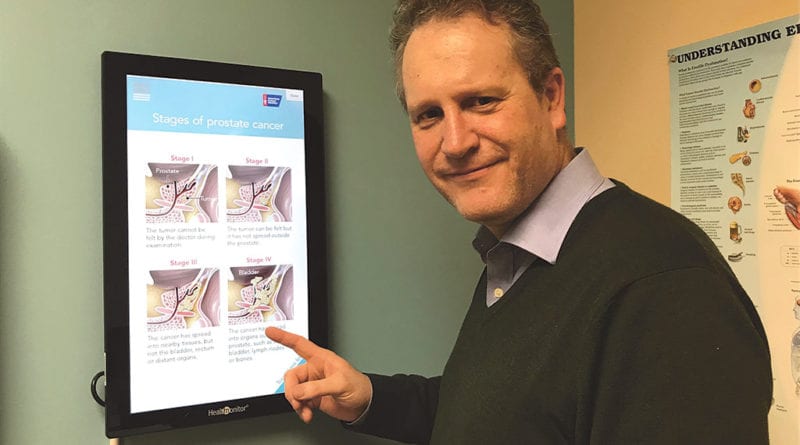 “The movie is about two old guys who hadn’t properly managed their prostates, so they were getting up at night all the time, and that’s why they were grumpy.”

Berry, who works at Holyoke Medical Center’s Urology Services, said he tells that story because many men are affected by prostate issues and aren’t even aware they have a problem.

“When I first see them, many of my patients say they don’t think they have any symptoms,” he noted. “We have them try some prostate medication, and they often come back to tell me, ‘I had no idea I was this bad.’”

The prostate is a small gland in men that helps make semen and is one of the few things in the body that start to grow as men age. As it gets larger, the prostate can cause problems for some men, such as difficulty starting urination, a weaker stream, and a feeling they are not completely empty after urinating. Other symptoms include an increase in the urge to go with a feeling they can’t put off the urge as they once could, and — like in Grumpy Old Men — waking up more than once or twice at night to urinate.

Different medications and procedures are available to treat an enlarged prostate, and Berry said they all have the same goal: to open up space to make urination easier. Prescription medications, such as Flomax, work well for many of Berry’s patients and are generally well-tolerated. On occasion, he uses other medications to slowly shrink the prostate in size, but these can take up to a year to completely work.

Among the non-medication therapies available for prostate issues, Berry said he often uses laser-based procedures because they tend to be minimally invasive and can be done in the doctor’s office.

During these treatments, Berry will monitor his patients for any changes to the prostate and track their prostate-specific antigen (PSA) levels for any increased risk of prostate cancer. While the reliability of the PSA test has been questioned in the past, Berry said that is largely due to attempts to make the test one-size-fits-all, where too much emphasis was placed on the PSA score without any context.

“Once men reach age 50, the prostate becomes larger and will naturally show a higher PSA score,” he explained. “If you understand that a healthy PSA score will be a different number based on age and risk groups, the score works well and can be very helpful.”

If someone has a routine test that reveals a seemingly high PSA number, he added, they should follow up with a urologist to have it checked further.

For this issue and its focus on men’s health, HCN takes a look at problems that can affect the prostate, including prostate cancer, and how diagnosis and treatment have evolved in recent years.

A high risk assessment doesn’t always result in prostate cancer, so Berry advises against taking any radical steps, such as having the prostate removed, based on risk factors. “Just because you have the gene does not mean you will get the cancer.”

According to the National Institutes for Health, risk factors for prostate cancer increase based on age (men who are 50 or older), race (highest risk is among African-American men, followed by Hispanic and Native American men), and family history (the risk increases if a father or brother had prostate cancer).

Nai stressed, however, that the most common types are of the slow-growth variety. “It’s possible for some people to develop prostate cancer, never treat it during their lifetime, and eventually die from other causes.”

Still, no one wants to hear they have cancer. Nai acknowledged that, while any cancer diagnosis can cause panic, it’s important to understand that most prostate cancers are not aggressive and grow slowly, allowing doctors and patients to set up an effective treatment plan. In fact, for many patients, the plan is to wait.

“Doctors will often practice what’s called watchful waiting or active surveillance, so while there is no treatment initially, we regularly check for any change in condition. If the cancer starts to grow, then we begin treatment,” Nai explained.

For slow-growing cancers, Berry said watchful waiting is also better for the patient on a social level because one of the side effects of treatment is erectile dysfunction.

“The average age for a prostate-cancer diagnosis is 62. If I can delay treatments until my patient is 72, he is less likely to be bothered by the impact on his erections because it won’t have the same effect on his life.”

Jim Burke is someone who lived with a high PSA score for more than 15 years. Two years ago, it increased enough to where his doctor ordered more tests, which revealed two cancerous lesions. One of the lesions was concerning because it was located on the edge of his prostate.

“When the doctor told me, it was a tough moment,” Burke said. “I wasn’t totally surprised because we’d been watching this for 15 years, so I figured something was eventually going to happen.”

Burke said he then started asking questions. “How severe is it? What are my chances, and what’s going on?”

Because the lesion was a more intermediate-growth cancer, doctors predicted Burke might have problems within five years if he did not address it. Given the option between surgery or radiation treatments, Burke consulted with his doctors and chose radiation after learning each treatment has a similar success rate of 85% in eliminating the cancer.

“The doctors told me, ‘the bad news is, you have cancer; the good news is, if you’re going to have cancer, this is the one to have because we can get rid of it.’”

Because his prognosis was so positive, he added, he was completely on board with the treatment plan. For five days a week over a nine-week span, he drove from his home in Greenfield to Cooley Dickinson Hospital in Northampton to receive 44 radiation treatments for his prostate cancer.

“My advice to anyone facing this is to go through the whole process; don’t stop halfway. The doctors and nurses work as a team and set a course of action for you to follow.”

Burke admitted to feelings of anxiety and depression at times, but kept a positive attitude to stick with the plan and complete his treatment. Now, a year after his last radiation treatment, he calls himself “one of the lucky ones.”

Burke, who recently turned 73, can appreciate the importance of staying on top of his risks for prostate cancer and taking action at the right time.

“We kept an eye on it for 15 years, and when it manifested itself, they got it. Now the doctors told me I’m good for 12 to 15 years, and it may never come back.”

For men who want to better understand their risk factors, Berry said colon-cancer screenings can be a helpful guide for when and how often to test for prostate cancer.

“I recommend PSA tests for men at ages 40, 45, and 50,” he told HCN. “Then, have a conversation with your doctor to see if you need closer follow-up. Like colon-cancer screenings, if there’s no problem, every five years after that is fine.”

Even if cancer never enters the picture, Berry stressed paying attention to prostate issues and not just ignoring them.

“The challenge is telling someone they’ve got a problem when they don’t think they do. Until they try our treatment, they’ll never know how much better they can feel.” v 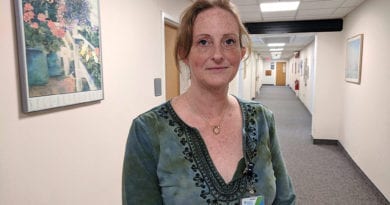