SPRINGFIELD — Oh, the aches and pains of snow shoveling.

Winter in Western Mass. has already seen its first major snowfall. But the beauty of freshly fallen snow can quickly turn ugly for thousands of people who sustain lower back, neck, shoulder, and wrist injures each year after shoveling wet, heavy snow from their driveways and sidewalks.

“For those in good health, taking the proper precautions and learning the correct techniques for shoveling can go a long way in preventing injuries before picking up a shovel,” said Dr. Julio Martinez-Silvestrini, staff physiatrist at Baystate Physical Medicine and Rehabilitation.

“You should avoid shoveling if you already suffer from low back pain or have coronary artery disease, and are not used to strenuous physical activity,” he added.

It’s best to shovel freshly fallen snow before it becomes more wet and packed down, said Martinez-Silvestrini, who noted the importance of warming up the muscles before setting foot in the cold outdoors to shovel. “Take time to stretch your lower back muscles with some gentle exercises, and consider walking for a few minutes or marching in place. You should also drink plenty of water to avoid dehydration and refrain from any caffeine or nicotine, which are stimulants and may increase your heart rate.”

Martinez-Silvestrini and the American Physical Therapy Assoc. offer the following tips for avoiding back injuries from snow shoveling:

• Lift smaller loads of snow, rather than heavy shovelfuls. Take care to bend the knees and lift with the legs rather than with the back.

• Use a shovel with a handle keeps the back straight while lifting. A short handle will cause the shoveler to bend more to lift the load. Using a shovel that’s too long makes the weight at the end heavier.

• Because the spine cannot tolerate twisting as well as it can other movements, it is important to avoid this movement as much as possible. Step in the direction in which you are throwing the snow to prevent the lower back from twisting. This will help avoid the next-day back fatigue experienced by people who shovel snow.

• If possible, push the snow away instead of lifting it.

• Take frequent breaks when shoveling. Stand up straight and walk around periodically to extend the lower back.

• Standing backward-bending exercises will help reverse the excessive forward bending that occurs while shoveling. To do these, stand straight and tall, place your hands toward the back of your hips, and bend backward slightly for several seconds.

The good news, according to Martinez-Silvestrini, is that most lower back pain goes away within a couple of days with self-care, including the use of over-the-counter medications and gentle exercises provided by a doctor or physical therapist to help keep the muscles moving and speed the recovery process.

Martinez-Silvestrini noted that there is sometimes confusion over whether to use ice or heat after injuring the back. “Apply a cold pack as soon as possible after the injury at least several times a day for up to 20 minutes. Then apply heat after two to three days to relax your muscles and increase blood flow,” he said. Patients should consult their physician if pain persists after three days of self-care.

Unfortunately, for some, not all injuries are simple strains. “We see many patients in the wintertime who suffer from herniated discs, which are common to the lower spine,” said Dr. Sherry Taylor, chief of the Division of Neurosurgery at Baystate Medical Center. “When a disc is herniated or ruptured, it can create pressure against one or more of the spinal nerves, resulting in numbness or pain in the lower extremities, often radiating down the leg.”

Taylor noted that her office also sees many spinal fractures when people slip while shoveling snow or chopping ice. “Consider buying yourself a pair of shoes or boots with good traction or adding snow and ice safety traction devices to your footwear,” she said.

If possible, she said, people should use a snowblower to do the work for them. But if not used correctly, even using a snowblower can strain or injure the back if the user pushes or forces the equipment to go faster.

“The best advice is to get help,” said Martinez-Silvestrini. “Hire the youngster down the street to shovel for you or contract with a plower.” 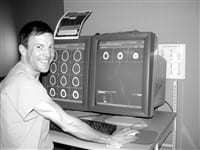 Living with Chronic Back Pain