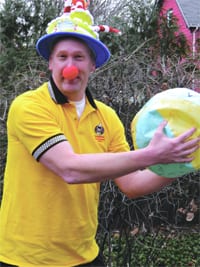 Trevor Smith loves to laugh. And although some might find it funny, he gets paid to do so via therapeutic laughter programs titled Laugh for No Reason. In doing so, he promotes good feelings and a sense of community by giving people a time out to laugh — along with permission to be silly.

Although the idea may sound preposterous, the certified ‘laughter leader’ says adults have a difficult time laughing. “As a society, we have forgotten how to laugh. On average, children laugh 400 times a day, but adults laugh only 15 times a day,” he said. “We live in a very stressful society, so therapeutic laughter is a tool people can use in their everyday lives to make it healthier and more productive.”

Smith believes most people don’t make humor a priority in their lives. “We take everything so seriously,” he said, adding that people spend too much time worrying about status, money, and upward mobility. “And as we get older, we don’t have the same opportunities to laugh that we do as children.”

Laughter programs, he continued, are on the cutting edge of health and wellness research. “Laughter programs are becoming more accepted in the scientific community,” he said, citing research being done by Dr. William Fry Jr. and Dr. Michael Miller. Fry is a psychiatrist and professor emeritus from the Stanford University School of Medicine who has been hailed as a pioneer in the field of humor research. Miller led a team of researchers at the University of Maryland School of Medicine who discovered that laughter is linked to healthy function of blood vessels.

Smith said other researchers have shown that laughter reduces stress along with negative thoughts and feelings. “Fifteen minutes of laughter is equal to doing 30 minutes on a treadmill in terms of aerobic exercise and breathing,” Smith said. “It strengthens your immune system and helps your breathing. And when you laugh, you become more energized and build more positive connections with people.”

When Smith was young, he loved to laugh and especially enjoyed watching old sitcoms on TV. “I was the class clown in school,” he said. “I always had the ability to laugh at silly things for no reason.”

His background is in adult recreation therapy, and he first entered the professional world of laughter five years ago as a means of promoting wellness. At the time, he was employed by a mental-health agency and worked in a residential program. “A lot of the people there were depressed. They didn’t have very happy lives, and had physical and emotional ailments they had to deal with on a day-to-day basis,” Smith said.

While surfing the Internet, he came across a two-day training program conducted by the World Laughter Tour, whose graduates earn certifications as laughter leaders. “It’s a little different than being an M.D. or a Ph.D.,” he laughed. However, Smith made the decision to take the training in hopes that it would help him bring some joy to the lives of the people he worked with.

The company, founded by clinical psychologist Steve Wilson, has a mission statement which reads: “together we can lead the world to health, happiness, and peace through laughter.”

Smith says Wilson started the laughter movement in the U.S. because he was interested in the power of humor and how it could help improve mood and people’s daily lives. “In 1995, he connected with Dr. Madan Kataria in India, who has a business called Laughter Yoga International. They collaborated and went on a tour of the U.S. educating people about the power of humor and laughter,” Smith said. In 1998, Wilson started his World Laughter Tour business.

Smith said the training program he took part in was a joyous experience. When he returned, he began holding monthly laughter sessions in the residential program where he worked as a way to build a sense of community and brighten people’s spirits. People enjoyed them, and he said he saw an immediate change in their attitudes. “They seemed happier and healthier after the sessions.”

Staff members often took part in the programs, and Smith began getting requests via word of mouth to conduct his program in other facilities. “I started getting calls and thought maybe I could turn it into a viable business and get paid to laugh,” he said.

Today, Smith spends about 20 hours each week marketing his product and conducting programs. The majority have been given at senior centers and nursing homes, but Smith has also shared Laugh for No Reason with businesses. A session runs from 40 to 60 minutes and costs between $150 to $300, depending on the group. Smith has worked with both small and large groups, with audiences from five to 200 people.

“People often aren’t very happy. But laughter helps them connect with who they are and feel good about themselves,” Smith said. “It also makes me feel good and is good therapy.”

However, some confusion exists about the purpose of his programs as well as the methodology he employs to get people to laugh. “It is actually an interactive health and wellness program. But people think the program is a comedy show,” Smith said. He explained that he doesn’t tell jokes or relate humorous anecdotes, as humor is subjective, and some people might not find the material funny.

Although he loves to help people enjoy themselves, he never dreamed he would enter this type of a career field. “This work is very exciting. But I never thought I would do anything in front of an audience,” he said. In fact, Smith used to fear speaking in public.

The venue has made the difference. “This is something I really believe in,” he said, adding that each group has different expectations.

He begins by creating a positive atmosphere. “Being positive is more important than the show itself. You set a mood right away, and the dynamics change with the audience,” he said. Smith has people do a series of interactive exercises as he warms them up and gets them ready to connect with what he calls their “inner child.”

He has people say “ho, ho, ho” and “ha, ha, ha” for about five minutes. “I get people to clap and ask them to move around, unless they have limitations which make it physically impossible for them to do so,” he said. “It’s a very visual program that you really have to experience. A lot of it involves getting people in the audience to be creative.”

Smith employs improvisation during the sessions, which include exercises such as having people talk in gibberish to each other.

“It’s contagious and after a while people start laughing for no reason. This is not like comedy, where something that is funny to me may not be funny to you. Comedy can be dangerous, as it’s very subjective,” he explained. “Instead, we are laughing with each other, not at each other, in a non-judgmental environment. That is the power of this program. I never try to put anyone on the spot. Everything is done as a group.”

Smith tells his audience how to start laughter clubs in their churches or community centers. He also teaches people what he calls “the six daily practices of good-hearted living” and offers an overview of each practice.

“Monday is for compliments, Tuesday is for flexibility, Wednesday is for gratitude, Thursday is for kindness, Friday is for forgiveness, and weekends are for chocolate,” he said. “These practices are to prevent hardening of the attitudes and add more laughter to your life.”

He said the Monday practice of complimenting others is important because “it becomes our tendency to criticize and be judgmental of others, which takes away our laughter. People should look for the good in each other.”

At the end of Smith’s programs, it’s not unusual for people for people to thank him. “They tell me they don’t have opportunities to laugh and how much it has meant to them to be able to laugh without being criticized,” he said. “There are so many people who come to my programs who are unhappy that I think laughter is more important than ever in helping people lead healthy and productive lives.”

Baystate Mary Lane to Present ‘Making It Through Menopause’