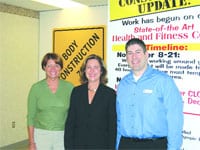 When people are choosing a health club, plenty of names — from Curves and Healthtrax to Gold’s Gym and Planet Fitness — might come to mind. But do they think of the YMCA?

Andrea Luppi thinks the Y might have a perception problem — one that makes it seem, well, like a vanilla option when considered beside newer, glitzier names in fitness. Downtown Springfield has its own image problems, said Luppi, director of Community Relations for the Springfield YMCA — and that makes her task doubly challenging.

But things are changing. A $500,000 overhaul of the YMCA’s health and wellness center was unveiled to the public early in December, bringing the Y into the 21st century with new, state-of-the-art equipment intended to attract an audience that might never before have considered joining.

“Once our finance committee gave us the go-ahead for this project, it was almost anticlimactic for us, because we already had invested so much energy in thinking about this, and we knew what the outcome would be if they just trusted us,” Luppi said. “This is much more than putting a fresh coat of paint on the wall.”

The answer to that question had as much to do with the center’s place in the Springfield community as it did with good health.

“The YMCA and its board of directors made a decision to reinvest in this building,” Walther continued, “because we believe in the importance of a viable YMCA in downtown Springfield, and we want to do our part to impact the resurgence in Springfield and change the paradigm here.”

That’s right: Walther thinks the YMCA will contribute to a changing perception of Springfield, and perhaps inspire other local businesses and organizations to make their own positive changes.

This month, The Healthcare News examines the many elements going into this expensive renovation — and why officials at the YMCA are so confident of seeing a strong return on their investment.

Walther said a quick check of area workout centers tells the story of an industry that’s moving quickly — and those who stand still will not be able to compete.

“The trends have changed so much over the years,” she said. “Fitness is always reinventing itself, and fitness centers need to reinvent themselves to meet the needs of clients. We realized that, if we want to be successful here and attract membership, we need to be good stewards and create a health and fitness center that people want to come to. Our goal isn’t to be OK; we want to be the place of choice.”

That means heavy investment in workout equipment that’s a far cry from the Nautilus devices and treadmills that dominated the scene in years past. For instance, the Expresso stationary bike allows users to view one of 30 different courses on a computer screen as they ride — and even race against the riders sitting beside them.

Meanwhile, the Koko Smart Trainer fits the exercises of a multi-station circuit training center into one machine, so much less time is spent setting up the equipment. In addition, users can view a monitor that shows them whether they are using proper form; if not, the reps they perform don’t count against their goal.

“We’re looking at getting things that are fun,” Walther said, adding that five 42-inch plasma TVs in the center contribute to that priority. “We recognize that whether it’s a child or an adult, fitness has to be fun. Only 15{06cf2b9696b159f874511d23dbc893eb1ac83014175ed30550cfff22781411e5} of the population works out on a regular basis, and to get the rest of the people in here, they have to enjoy what they’re doing, and they have to have a lot of different options. Not every machine speaks to everybody.

“What’s great today is outdated before you know it,” she added. “It’s not like it was 20 years ago, when you got new equipment and you could hardly tell the difference from the old stuff — and you only replaced equipment when it died.”

That’s why the YMCA has decided to lease a good deal of its new equipment instead of buying it outright. “That way, we’ll be able to upgrade all of our equipment and technology on a regular basis,” she said.

Speaking of state of the art, some of the project budget went into resurfacing the indoor track that circles (well, ovals) the fitness area. “In this day and age, some people say that for the square footage, we don’t need a track, but we call it our purple cow — the thing that sets us apart,” Walther said. “We’re putting in a state-of-the-art track surface that’s used on the finest tracks in the country.”

The center also features traditional weight and cardio equipment for clients who prefer them, she added, but the Y is placing a decided emphasis on bringing its equipment into the 21st century — both in technology and overall mindset.

“We have professional people and community leaders working out here,” Luppi said. “But how do we attract the up-and-coming young professionals? How do we bring in new members who will grab onto the mission of the Y and enjoy the diversity we offer, who don’t want to just come in, lift weights, and leave, but want to become a member of the Y family?”

Walther knows that to compete for fitness dollars, the YMCA has to shed its ‘just the Y’ image among people who have never taken part in its programs.

“One of the things that sets us apart is our mission, which is to develop strong spirit, mind, and body,” whereas most health clubs focus mainly on the body, Luppi said. True to that mantra, the Springfield Y has long been eyeing classes in yoga, tai chi, and pilates. But a lack of classroom space hindered the center, which didn’t want to squeeze out longtime adherents to its traditional classes, such as step aerobics.

“We’re putting in a second group exercise studio where we can run concurrent classes, which can feature more of the mind-body classes that have become so popular, in addition to traditional models such as cardio and strength training,” Walther said.

The YMCA has also made an effort to widen its offerings for people with different needs, including the installation of wheelchair-accessible equipment.

“We want this place to be for everybody,” Walther said. “We want to speak directly to the handicapped market, so people who are handicapped or even temporarily disabled or have sports injuries can still continue their workout.”

Luppi said that, while it’s unrealistic to think the YMCA isn’t competing with clubs like Gold’s Gym and Healthtrax, the center likes to think of itself as offering something different.

“We’re a family center,” she said. “A family can come here, and the adults can go downstairs for an hour and work out while their children are working out in our youth fitness area.”

That new, youth-oriented workout room marries traditional workout equipment with physically challenging gadgets, such as a video game system that requires the use of the whole body.

“I think people sometimes make the mistake of seeing kids through an adult fitness model, and that’s not really what kids want to do,” Walther said. “They want to have more choices, and things that speak to them. Kids can be couch potatoes, and we want them to get excited about fitness, and make it so they don’t think of it as working out, but they think of it as having fun.”

That, in turn, sells the Y as a healthy place for kids to hang out, work out, or even do their homework. “Then, as they grow up and are able to go down into the big fitness area, we’ll still be meeting their needs.”

The YMCA’s free drop-in child care speaks further to its family-oriented mission, Luppi added. “We want to capture that market of young families and up-and-coming professionals. If we can get them to the Y and get them committed to the mission of the Y, they’ll stay here.”

The idea, Luppi said, is to cultivate new interest in the YMCA that spans generations, creating longtime relationships — and hopefully more donors who will faithfully support the facility in the years to come.

She admitted that a half-million dollars is a lot to invest in a project of this nature, but she said the center is confident it will see a return on its investment — and, perhaps, turn the YMCA into a destination, one that will have a positive impact on the entire downtown area.

“I hope people get excited about how we can have a snowball effect,” Walther said. “If people see that the Y believes in Springfield and dares to invest in Springfield, they might change their thinking about where Springfield is headed. Businesses might look at us and say, ‘if I do something, if everyone in the neighborhood does something, we can change the paradigm.’”

That involves addressing people’s often-expressed security concerns about the area surrounding the Y, which is why the center is installing new entrances for members, including one directly off the parking lot.

“We have security in our parking lot, but people feel more insecure when they have to park on one side of the building and walk around,” Walther said.

“We’re making a huge economic investment because we’re committed to staying here,” Luppi told The Healthcare News. “We want to attract what used to be our core — which is professionals working downtown — and bring them back.”

“The whole focus should be on keeping businesses in Springfield,” Walther added. “This was known as the City of Homes, with a vibrant downtown. We’re trying to do our part to return to that reputation.”

And build some healthier bodies, minds, and spirits in the process.

Ethical Issues Seminar Set For May 3 At Baystate Medical Center 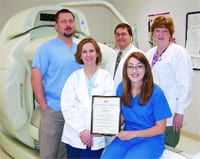