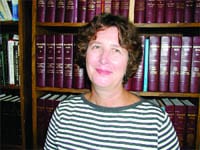 And by that, she means she limits enrollment and that she works diligently not to mislead participants or prospective participants about what they’ll find in the local job market in this emerging field that, as the name suggests, blends nursing and the law in an intriguing and somewhat entrepreneurial line of work.

People longing for full-time positions with law firms as consultants on matters such as suspected malpractice, on-the-job accidents, and slip-and-falls probably won’t find one, at least not in this area code, said Currier, director of the Paralegal and Legal Studies Programs at Elms, noting that, with a few exceptions, firms in this region simply aren’t big enough to take on such personnel.

But, she continued, putting heavy emphasis on that word, those who want to do such work to supplement their nursing income, or who want to retire from nursing but don’t want to retire completely and seek a new, let’s call it ‘part-time’ challenge, will find plenty of those opportunities.

And that’s why the Legal Nurse Consultant, or LNC, program has seen a steady volume of interest since it was launched in 1999, said Currier, who told The Healthcare News that this career option is different in many ways from most of those in the medical field.

But it is what makes it different that also makes it an intriguing option, she continued.

The profession of LNC has essentially grown out of the increasingly litigious nature of society, said Currier, noting that the courts today are swamped with cases that might not have been filed decades ago. This includes the health care field, she continued, which presents some challenges to practicing attorneys and paralegals who may know the law, but probably don’t know the many nuances of a medical chart.

Nurses do, of course, and many have found second careers, or supplements to their careers as registered nurses, by adding several courses in Legal Studies to their nursing degrees. Elms is one of roughly 80 colleges and universities across the country to offer such a program, and the only one in this region.

The certificate program features six courses totaling 19 credits — nine fewer than the traditional paralegal program. They include ‘An Introduction to Legal Studies,’ ‘Principals of Litigation,’ ‘Personal Injury Law,’ and ‘Research & Writing.’ This comprehensive introduction to the law, coupled with the RN’s vast experience in patient care and anatomy, with often make the LNC more valuable in medical cases than both a typical paralegal or a nurse who has not taken such courses in the law, said Currier.

And with the LNC certificate, individuals, working as either in-house employees or (far more often) as independent consultants, can provide a wide range of professional services, he continued. These include interviewing clients; screening cases for merit; analyzing and summarizing medical records and other evidence; researching and evaluating medical literature; locating, screening, and consulting medical experts; and preparing exhibits for settlement hearings and trials.

Evaluating malpractice cases is a part of the work, said Currier, adding that lawyers will often need some expert opinion on whether a potential claim has merit. But the work can take a number of different forms.

“Anytime anyone is injured, the amount of the damages hinges upon what caused the injury,” she explained. “So while everyone may agree that there was a car accident and someone got hurt, there may have been a pre-existing back problem. So was it the back problem? Was it the car accident? Any case where there’s a large volume of medical records and expert testimony that has to be reviewed, that’s when the legal nurse consultant can prove quite valuable.

“There can be a mountain of paperwork, or increasingly these days, electronic files to go through,” she continued. “Having someone who can understand those medical records, but who can also determine what may be legally relevant, is important.”

Interest in the field has grown over the years, said Currier, noting that the rigors of nursing — those physical, mental, and emotional in nature — have prompted some to leave the profession or seek reduced schedules. Legal nurse consulting thus becomes one of many options for RNs to consider as a career option or career supplement.

And it’s an attractive option, because the volume of work is steady, she continued, and the volume will only grow as the population ages, technology enables people to live longer, and society becomes ever-more litigious.

But while the work of the LNC is interesting and often rewarding, securing it can be much more challenging than in other fields of health care, where shortages of many specialists have created situations where graduates don’t have to find employers — the employers find them.

Indeed, LNCs are, as that term indicates, consultants, said Currier, adding that anyone who has done consulting work knows that to succeed in that competitive realm one must be entrepreneurial and able to sell their talents.

And many have succeeded in doing so, she said, noting that graduates (usually six to 12 a year) have found work locally and, through the use of the Internet, outside this area as well.

“It’s something that’s portable,” she explained, noting that area residents who retire to Florida or Arizona can, through the Internet, continue to work for lawyers in the Springfield area. “It’s a varied field, and that’s one of the things that makes it nice; it’s not a once-size-fits-all profession.”

One recent graduate found a lucrative full-time position with a Hartford-based law firm, said Currier, who holds this up as an example of what program participants can find. But it’s definitely the exception.

And that’s why she’s careful not to oversell. 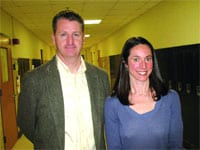 Armed and Dangerous Why ‘Overhand Athletes’ Are Prone to Shoulder Injury