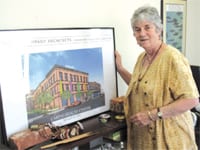 At precisely 4:31 p.m. on June 1, 2011 — the moment when a tornado tore the roof off the South End Community Center in Springfield and sent much of it flying into the back wall of Caring Health Center, two things seemed out of place.

One, obviously, was a tornado in downtown Springfield.

The other was the fact that only two patients were inside the clinic at 1040 Main St. when it sustained enough damage to close for repairs for the next four weeks. This is, after all, a facility that — combined with a second, smaller location on Sumner Avenue — logs about 50,000 visits from approximately 14,000 patients each year.

Vice President Tania Barber remembers the employees’ smashed cars in the parking lot behind the building. Although no one was injured, “we wouldn’t want to go through that again,” she said.

More significant, though, was what happened across the street, where a historic, three-story building was being remodeled for a major expansion, one that promises to almost quadruple Caring Health’s total current space. And now most of its top floor had been sheared off, its distinctive mustard-yellow bricks broken and scattered with the wind.

It was a setback, CEO Anne Awad said, but not a fatal one, as the past year has been marked by a flurry of fund-raising that has reconstruction set to begin this month and the new space expected to open by next summer.

Meeting challenges, after all, is what CHC — which serves, among its patient population, thousands of people who would otherwise have trouble accessing the health care system — does best.

“Most patients are residents of the South End — or the Six Corners neighborhood, in the case of the Sumner Avenue location,” said Awad of a second location in the Forest Park section of the city. She noted that many patients are lower-income residents (although some don’t fit that description) and face challenges when it comes to navigating the health care system.

“A lot of times, these are people who need a little extra support to help figure out our system, which can be very confusing,” she continued. “They might have language or cultural barriers; they might have been born or raised in another country, so our health care system looks strange to them. They want to get services, and we have to build the confidence in them to try.”

To Awad, Caring Health Center is all about providing access to health care, and delivering those services in what she called a “culturally competent” way.

“We’re courteous and respectful of people’s different ways of taking care of themselves,” she said, citing the center’s mission to “bring the highest level of health care to those who are challenged by socioeconomic, linguistic, and cultural barriers.”

It’s a mission that began in 1976, although early efforts wouldn’t bear fruit until 20 years later. Back then, Awad explained, a group of South End residents — going by the clunky name of the Springfield South End Community Health Center Development Corp. — wrote a proposal to the U.S. government in an effort to bring a federally funded community health center to the neighborhood.

That project was approved in 1980, but when the Reagan administration swept into office the next year, budget-cutting and shifting federal priorities scuttled the funding for the initiative.

However, in 1992, Springfield’s Department of Public Health revived the effort, establishing a 40-member task force of residents, health care providers, and state agencies to build on the groundwork from the 1970s and resubmit a petition for a community health center. It was approved the following year, and Caring Health Center opened its doors in 1995.

“At that time, the staff numbered four,” Awad said. “But it really hit a need the minute it opened, and people poured in. Over the next 10 years, they were constantly adding to it.” Today, the staff numbers around 150, and the current building is straining at its seams.

As a health center in a community the government recognizes as a high-need area, Caring Health Center receives $2 million in federal funds annually, Awad explained, with much of the rest filled in by insurance billing for patients who have coverage, and most do.

“That allows us to see people who do not have insurance free of charge, and to provide them the services that might be needed,” she said, noting that CHC goes beyond its core offerings of primary care, pediatrics, and ob/gyn care in that it also provides nutritionists, social workers, and a behavioral-health piece, as well as niche programs like tobacco-cessation counseling.

“Those things are paid for by that federal money,” she told HCN, “but we also like to stress that this is an economic-development model, not just excellent health care. It’s bringing $2 million into Springfield, which goes out through staff salaries, and that money is spent locally. We buy materials and supplies locally. That money flows right through us and adds $2 million to the local economy.”

Since its inception, CHC has opened that second site in the Forest Park neighborhood — which includes a dental clinic — but the overall demand for services is still greater than the space available at the two sites; the center’s administrative offices have been using rented space at 1145 Main Street, and many employees at the main clinic, including some doctors, are using tiny converted closets as offices.

So, in 2007, the health center acquired at auction the former Hampden Furniture building across the road at 1145 Main Street — a historic block where Rolls-Royce bodies were assembled almost a century ago — and conducted extensive remediation work, including the removal of asbestos and pigeon droppings, to prepare to add the building’s 45,000 square feet of space to its operations (which now total only 16,000 square feet).

Then the tornado hit, ripping apart half of the third floor and causing $1.2 million in damages. To make the challenge even more daunting, because it’s an historic property, CHC had to replace the lost bricks — about 4,000 of them — with identical ones. Fortunately, there are antique brick dealers who specialize in that sort of task, and Caring Health was introduced to a soon-to-be-razed middle school in Evanston, Ill. that had been built from the same distinctive yellow bricks, and was able to bring them back to Springfield.

As for the financial hit, “we did get about $500,000 in insurance coverage almost immediately. Then we launched a fund-raising campaign,” said Awad, who singled out the work of U.S. Rep. Richard Neal. “His efforts have been just amazing. He’s personally gotten on the phone and met with people and helped us fill that funding gap. Right now, we’re back on track to close financially in July, and construction can begin immediately after. At this time next year, we’ll be opening up.”

Awad and her staff have a wish list for the new location, including almost doubling the number of providers and patients and adding a pharmacy. But they’ve already come a long way from those humble beginnings in 1995.

Specifically, Caring Health Center places an emphasis on wellness and preventative health, with community-education programs on topics ranging from chronic diseases to substance abuse; from family planning to nutrition. The center participates in the Women, Infants & Children (WIC) Supplemental Program and offers outreaches like a ’teaching kitchen’ to encourage lifelong healthy choices.

“Another doctor might just tell you, ’I want you to lose weight.’ But we recognize that sometimes people are sort of stuck in family situations, where a grandmother is doing all the cooking and has her own ways of cooking” that might not be healthful, Awad explained, adding that a CHC nutritionist will engage the whole family and show them how to prepare traditional dishes a bit more healthily, so that everyone benefits.

“We’re changing behavior and thinking; part of it is involving community members to take part in this change,” said Jacqueline Johnson, the center’s chief operating officer. But another part, she added, is overcoming a lack of access to healthy choices. For instance, many people without reliable transportation are stuck with limited options when it comes to food. “There aren’t any Whole Foods (markets) in downtown Springfield. There aren’t organic stores or farmers’ markets. And if you don’t have access to transportation, that’s another barrier to making the changes you or your children need to make.”

Caring Health Center’s focus on wellness is appealing to many of its doctors, Awad said, who are seeing changes in their patients over time — and, therefore, seeing the health of an entire neighborhood change for the better, if only subtly.

It’s a neighborhood that’s home to large groups of immigrants, refugees, and minorities, all vulnerable populations in some way, said Awad, who noted that African-Americans, for example, suffer prostate-cancer and infant-mortality rates much higher than average.

But it’s “an amazing place to work,” she said, because of the way the center meets that diverse population with a striking diversity of its own.

“A lot of health centers focus on serving a particular population,” she told HCN. “In Boston, you’ll find health centers that primarily serve Chinese or Latino patients. But one thing I love about this place is the diversity. We have Somali staff, Iraqi staff, Russian and Ukrainian staff, Vietnamese, Latino, white … it’s such a mixture of people.”

It’s hard work, she said, keeping this mixed group — the staff speak a total of 19 languages — clicking together, but overall, “people love the aspect of learning all the time and having this enormous mixture of people. Many of them go home to neighborhoods that aren’t as diverse, but they’re immersed in diversity at work. I think that’s empowering for everyone, and inspiring.”

And it’s critical to the center’s mission of providing understanding care to people of different cultures. “When a Russian immigrant comes here, we actually have an adult and a pediatric provider who are Russian; they not only speak the language, but they grew up in the same kinds of communities. They understand where those patients are coming from.”

Awad and her team, 150 strong and growing, know where they’ve come from, too, and where they want to go next. And it’ll take much more than a freak tornado to slow them down. 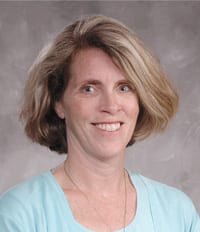