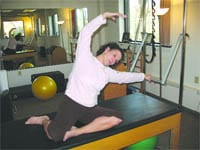 A woman named Jane arrived at the Pilates Center of Western Mass. with multiple sclerosis — and a willingness to try something new.

“She has a walking issue with her foot drop, so with Pilates we’ve been working to strengthen those muscles,” said Janet Allen-Burke, owner of the center. “The instructor she works with, Nancy Hughes, is a dancer, and she understands how the body moves, so we can look at these muscles and say, ‘these are too tight,’ or ‘these are too weak,’ and help her become aware of why her foot is dragging.”

By giving ‘Jane’ techniques to improve her gait pattern, Allen-Burke said, she can gain strength and not fatigue as quickly in the activities of daily life — all while managing an often-debilitating disease. “We’ve definitely helped her stay at a plateau rather than regress.”

Allen-Burke has done more than plateau since making the leap — or perhaps stretch — into the world of Pilates instruction when she bought the West Springfield-based business three years ago, and later moved it to Longmeadow. Before that, she was working as a physical therapist at an orthopedic clinic in Hadley.

“I love doing Pilates because I get to use my physical therapy training without all the medical paperwork,” she said. “I’m constantly assessing people and using the same skills I learned as a PT to make a difference in people’s lives.”

Pilates, named for its creator, Joseph Pilates, is a system of mind-body exercise that focuses on flexibility, correct posture, and body awareness to develop tone and strength, but not the bulky strength of traditional weight training. The emphasis is instead on matters such as muscle elasticity, joint mobility, correct posture, and proper breathing.

“It’s about core stabilization and strengthening the trunk,” said Allen-Burke. “A lot of people come in with bad backs, and their doctors have recommended Pilates.”

Participants learn how to engage the abdomen and to place less pressure on the back, and much of it is built on posture. “It’s body awareness,” she explained. “You can muscle through anything; anyone can do a pushup. But when you do it so you feel it in your abdomen and you’re focusing on your core and using the correct muscles, that’s more efficient and leads to less injury.”

Pilates uses a series of resistance machines that focus attention on specific muscle sets, while keeping other areas at rest. Most exercises are performed in a reclining or sitting position, and are low-impact and weight-bearing — which is beneficial when someone wants to keep a sore back flat while working on leg muscles.

“People come in to strengthen their abs or look good in a bathing suit, but also after spinal fusions, when they’re limited in what they can do,” she said. People rehabbing from ACL injuries can do Pilates alongside older people for whom other types of workouts have caused pain in the past. “With this kind of exercise, we work within the confines of whatever the body dictates,” Allen-Burke said.

That’s why Pilates doesn’t involve pushing exercise to the point of exertion, she said, because that would simply lead to a loss of good form. “If I’m going skiing, I want to ski with correct form,” she explained. “If I’m fatigued, I could get sloppy, fall, and hurt myself. Pilates is like that — learning body awareness and always being where you need to be.”

“With MS,” she continued, hearkening back to her client, Jane, “we don’t push the body too far because it can go into an exacerbation of symptoms. With Pilates, you’re not stressing the body to fatigue, which will bring improvements without causing any symptoms.”

Meanwhile, the body-awareness facet of Pilates — with its focus on proper breathing, correct spinal and pelvic alignment, and smooth, flowing movements, helps participants become acutely aware of how their body moves in space, a lesson they can take with them while performing any activity, work or play.

“This isn’t a cardio workout,” she said. “Even if you come three times a week, you’ll still need to walk or run or do ellipticals. But it is resistance work, like weights, the same as working your muscles against resistance, and that’s why it benefits, say, people with osteoporosis. It creates a resistance in the muscle that regenerates some bone growth, so it can take the place of weight training, or act as a complement to it.

“No one should do just one thing,” she added. “I still do my weights, I do Pilates, and I run. Cross-training is what it’s all about, but for those who can’t do weights, this is a great alternative.”

Having worked in an orthopedic clinic and in home care, Allen-Burke has always enjoyed helping people, but now she can do it on her own terms.

Plenty of group sessions are available as well. Business has grown largely by word of mouth, she said, particularly among people who had never experienced the benefits of Pilates, and who believed that if their workout doesn’t have them panting and in pain, they’re not getting any results.

“A lot of people are seeing the benefits in themselves after coming here: ‘my back doesn’t hurt after playing tennis,’ that kind of thing,” she said. “An important key to fitness is stretching, and flexibility is a huge component of Pilates; when they’re here, it forces them to work that in.”

“I don’t know of anyone who said, ‘Pilates didn’t help me,’” Allen-Burke concluded — and to judge by her growing roster of clients, that might not be too much of a — well, stretch.