It’s not something they think about every day, but bone density plays an important role as women age.

A painful hip or spine fracture can hospitalize a woman (or a man) for months, can make someone less independent, and may even be fatal, depending on individual circumstances, said Dr. Timothy Tash, radiologist at Holyoke Medical Center (HMC), which recently purchased a state-of-the-art device for diagnosing osteoporosis.

Known as ‘the silent disease,’ osteoporosis is a progressive, systematic disorder characterized by low bone mass and an increase in bone fragility and susceptibility to fractures, especially in the hip and spine.

For years, only minimal testing and treatment options were available, but technology has progressed significantly in the past 20 years. HMC’s installation of the General Electric Lunar DEXA Scanner represents a major advance, Tash said.

Today, inside the Women’s Center at the hospital, women may undergo a painless bone-density test that takes about 10 minutes, doesn’t require undressing, can be scheduled at the same time as their annual mammogram — and, Tash said, can literally be a life-changing experience.

“This is the best way to measure bone density today, and having this quick test can tell you if you’re at risk,” he said. The Lunar DEXA Scanner replaces the Women’s Center’s previous, 11-year-old model, and with it comes the latest in computerized reporting and analysis technology, a system called FRAX, he explained.

Created by the World Health Organization to standardize and provide bone-density protocol measures, the FRAX system tells radiologic technologists a patient’s risk for bone fractures compared to a healthy person, as well as a 10-year probability for hip, forearm, spine, or other osteoporotic fracture based on how dense their bones are at a given moment in time, said Tash.

About 8 million women and 2 million men in the U.S. have osteoporosis, and another 18 million Americans have low bone mass, placing them at increased risk of the disease.

In addition to judging the risk of more common fractures, the GE scanner at the Women’s Center is also able to scan wrists and forearms, as well as perform vertebral fracture assessments, which are possible with a simple turn of the body during the test. Two X-ray beams, exposing the patient to about one-tenth of the radiation received from a chest X-ray, quickly measure bone-mineral density and produce images of the spine, hip, or even the whole body.

Through careful further analysis, HMC radiologists then partner with a patient’s primary-care physician to provide the most effective treatment options. Tash noted that medications are available that can slow the process of bone deterioration and significantly enhance quality of life for patients with low bone density, sometimes preventing painful fractures.

Bone-density tests are recommended for any man or woman with a risk factor or with a history of osteoporosis, according to the U.S. Department of Health and Human Services.

While there is no recommendation to routinely screen the general population of men at any age, for women over the age of 65, bone density tests are recommended every two years, and are usually covered by insurance, said HMC Radiologic Technologist Julie Janocha.

At the center’s second-floor offices at 2 Hospital Drive, directly across the street from HMC, Janocha and her colleague, radiologic technologist Annie Novak, perform about 40 bone-density tests weekly. Appointments take about 30 minutes total, with 10 minutes for the actual scanning.

“We recognize that osteoporosis is a major problem,” Tash said. “Making testing accessible and easy for patients is very important.”

BMC ’Gets with the Guidelines’ 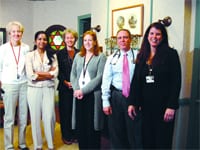